The 1911 design is, as most of its more emotional followers are quick to point out, over 100 years old. Mostly I don’t care about that at all. It’s interesting but it’s not better because it’s ancient any more than your Glock is better for being filthy or Austrian or grey in color. However, I do care about that in as much as the old design requires some special considerations in use and handling. Today I’m going to talk about one of those: dropping the slide on the 1911.

Something as simple as closing the slide doesn’t seem like it would require a great deal of care and attention. It does require just a little bit of (mostly) forgotten knowledge, however. The manner in which you drop the slide can impact the reliability and safety of your 1911. Let’s get into it.

Dropping the Slide on an Empty Chamber

The genesis of this article is a question from a friend and reader who I accidentally convinced to purchase a Dan Wesson 1911. Shortly after taking receipt of his new 1911 he saw a article by Massad Ayoob advising against dropping the slide on an empty chamber. Immediately he had a few questions: “is this accurate? Have I damaged my gun? How do I conduct dry practice with my 1911?” He also pointed out that he’d seen a video of Bill Wilson and Ken Hackathorn echoing this wisdom. 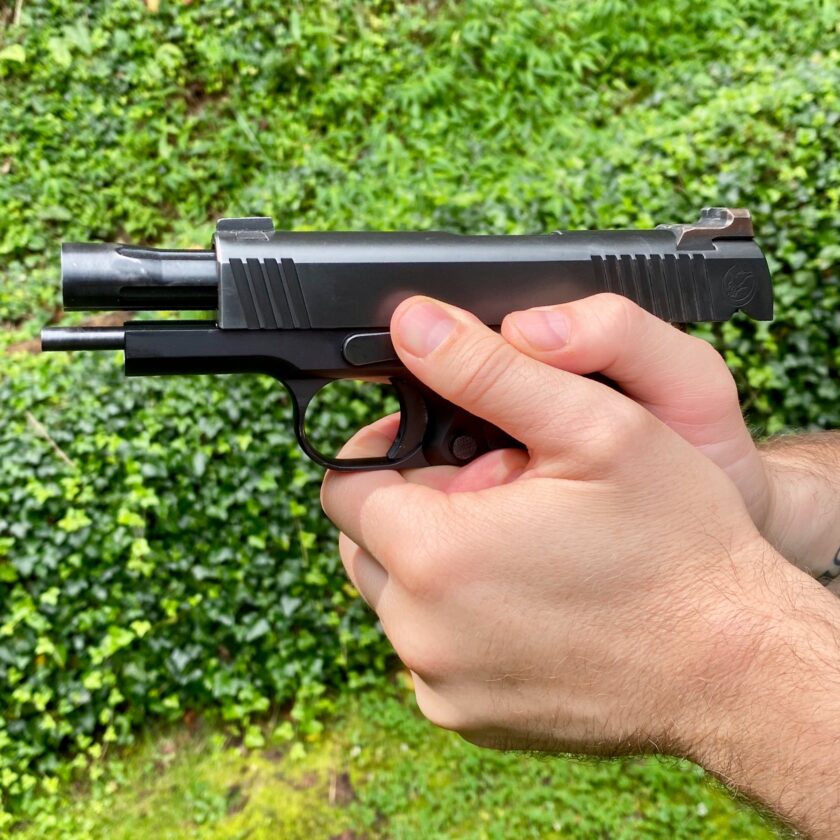 To be honest, I don’t know exactly how this harms the gun. I’m not a gunsmith and I’m not a 1911 expert, so I will defer to the experts. There are few that are more universally regarded as “experts” than Bill Wilson (founder and owner of Wilson Combat), Ken Hackathorn (Ken Hackathorn – seriously, what else do I need to say?) and Mas Ayoob. If these gentleman say that you shouldn’t drop the slide on your 1911 then who am I to disagree? I’ll take their word for it.

I didn’t initially hear this advice from them, though. The first place I encountered this advice was under two years ago, in the instruction manual for my Nighthawk Custom 1911. Like many of you, I rarely crack the instruction booklet, but on this pistol I did. I wanted to make sure I wasn’t going to do something that would potentially void the warranty. I was surprised to see, “NEVER DROP THE SLIDE ON AN EMPTY CHAMBER. DOING SO CAN CAUSED DAMAGE TO YOUR HIGHLY TUNED TRIGGER JOB.” 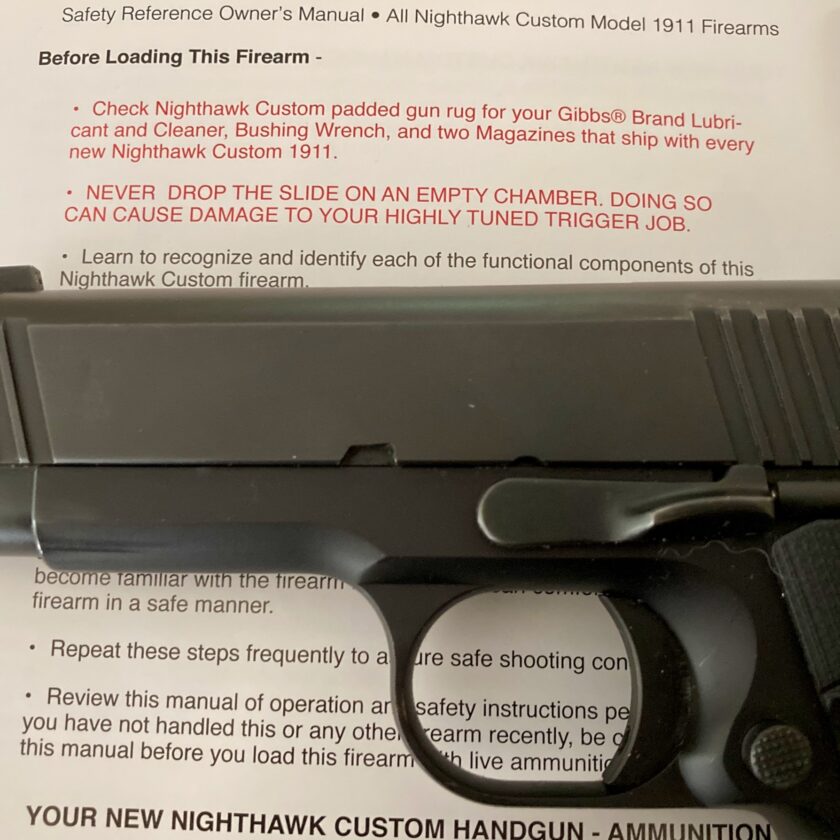 I was intrigued. I carried a hand-built 1911 in the military and I had never once been given this advice. I started researching the topic a bit and found a lot of information that corroborated what my instruction booklet said. Dropping the slide on an empty chamber can cause damage to the sear. I took that to heart and can honestly say I’ve never intentionally dropped the slide on an empty chamber on my NHC 1911. Obviously if you’ve adopted the 1911 you want to get the most out of your trigger, and will want to avoid this.

Let’s put this in perspective, though. As I mentioned, I was issued a highly tuned 1911 in the military. I fired tens of thousands of rounds through that .45 and I dropped the slide on an empty chamber a lot. An awful lot. Did it impact the gun? I’m sure it did, but I would think of this as “chronic” damage more so than acute damage. This damage will have a cumulative impact over time rather the destroying the gun in just a few incidences. Point being: if you’ve dropped the slide on your 1911 a few times, function check the safeties. If all is well, all is well. Your trigger may be ever-so-slightly less good, but your gun is probably just fine.

On the other hand, if this occurs enough it can cause “hammer follow.” Hammer follow is a phenomenon characterized by the hammer falling when the slide is sent home. This indicates that tolerances between parts in the gun have been extremely loosened and the gun is not safe to use or carry. You should regularly perform the aforementioned function check of your safeties. You should do this regardless of whether or not you drop the slide on an empty chamber, but especially if you do. An excellent article from Cylinder and Slide on how to do so is here and I may write my own one day.

Shooting and Dropping the Slide

If you’re shooting your 1911 you should drop the slide using the slide release or some sort of “sling shot” method. The slide must pick up a round off the magazine. That round (and perhaps the rounds in the magazine applying upward pressure against the disconnector rail) slow the slide’s forward movement. Allowing the slide to go forward under full power is important. The slide needs to generate energy to fully seat the round in the chamber. 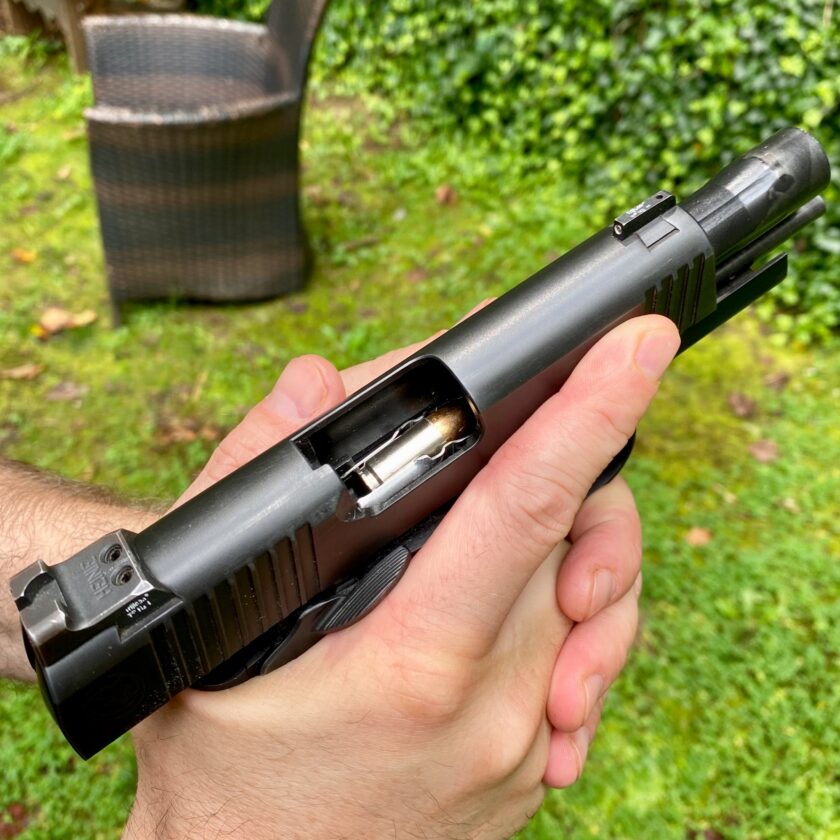 Arresting forward momentum during the chambering of a round can also cause other problems. It can prevent the round from sliding smoothly up the breach face, causing the rim to be forward of the extractor hook. I’ll talk about the extractor in a lot of detail in an upcoming article. Interestingly my Nighthawk Custom manual advises against using the “slingshot” method to release the slide. To be honest I think this is kind of overkill and seriously doubt that using the slingshot method is going to cause any issues.

Dry Practice and Slide Lowering with the 1911

If you’re administratively handling your gun or dry practicing without snap caps, you should not drop the slide. You should lower it, maintaining control of it until it closed. If you delve into the YouTube comments, some people have a huge, huge problem with this. I don’t really see why you’d be mad at this (unless, of course, you’re just looking for something to be mad about). Functionally this is no different than lowering a bow string on a rather than “dry loosing” the string – a practice that no one really seems to have an issue with.

The other part of my friend’s question was around dry practice. First and foremost, use snap caps. I have written about snap caps and their use, and use snap caps extensively. I strongly recommend investing in some snap caps and using them. In the 1911 they give the slide something to work against. Even if you are completely unconcerned with damaging your firearm, it is difficult to practice certain things (like reloads and malfunctions) without snap caps.

When dry practicing the conundrum becomes how to get the 1911 recocked and ready for the next iteration. Fortunately, the solution is pretty simple: rather than racking the slide or cocking with the hammer, I perform a press check¹. I have make recocking the gun an integral part of my training process. I draw the gun and present it to the target. If I press the trigger…cool. I get my follow through, conduct a search and assess. Once I’ve ascertained there are no further threats I perform a press check before holstering. 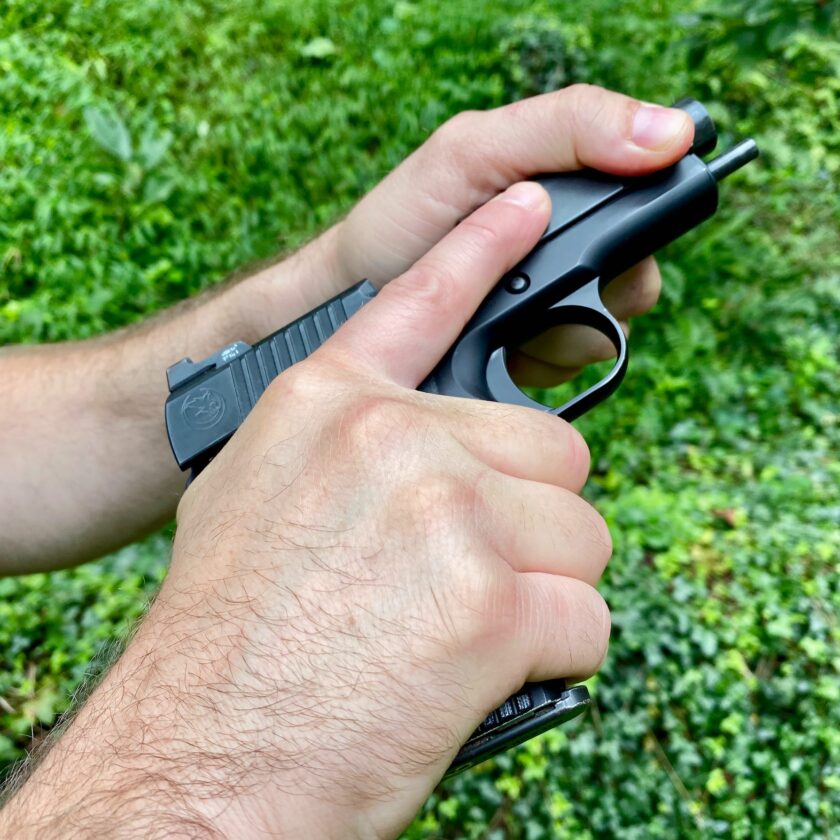 A sufficiently deep press check will recock the hammer. This facilitates my training by allowing me to recock the gun. It also facilitates my training by embedding this action. Though the press check is often ridiculed as “tacticool” if I’ve been in a gunfight it’s probably not the worst idea to ensure my gun has a round in the chamber before holstering.

There are those that say the 1911 isn’t reliable. I don’t concur with that; the 1911 can be reliable. It does, however, require a bit of special consideration. Lowering the slide on an empty chamber rather than dropping it is one of those considerations. The next time I talk about the 1911 we’ll tackle another: care for the extractor. Stay tuned!

¹Yes, as a member of the language-and-grammar club that we refer to as the “gun culture” (don’t believe me? Call a magazine a “clip,” in print or in person. I guarantee you’ll draw more ire and irritation than a “pro-gun” President who supports red-flag laws, and says we should forgo due process and take peoples’ guns.) I know it’s not technically a “press” check. Hopefully we all get the gist, though.