I’ve observed a recent trend of cops and even some firefighters wearing black medical gloves. Black medical gloves come with a lot of popular prepacked “IFAK”-style medical kits. This is a good example of “too tactical,” or the cart leading the horse. If you buy a first aid kit that comes with black medical gloves, find some new gloves. I’ll explain why.

Medical gloves are primarily to protect a caregiver’s hands from contact with bodily fluids of a sick or injured victim. In the TCCC-context with which most of my readers are likely familiar, an injury generally implies some sort of enemy action. I get that this creates a tendency toward items that won’t give away one’s position. But does that “benefit” come at a cost? More importantly, is it really a benefit at all?

For some elite military outfit I could perhaps be convinced that black medical gloves make sense. On the hands of local cops I have a hard time buying it. For a fireman or the average citizen…no way. First, are the gloves on your hands the most visible thing about you? It’s pretty unlikely in most cases.

As a fireman, you showed up driving a “BRT” (Big, Red Truck) that is designed to attract attention. There’s a good chance you’re wearing turnout gear with big, reflective lettering. If not, you’re wearing a navy-blue uniform. Do blue gloves really risk compromising your position?

As an average citizen, are medical gloves on your hands the most visible thing about you? Are you already wearing all-black long sleeves, long pants, and shoes? If so you may want to consider your wardrobe; it’s unlikely it’s doing you any favors.

Black medical gloves inhibit your ability to do one thing: quickly and easily recognize bodily fluids on your gloves. Sure, you may feel “wet” or “warm,” alerting your that something is on your glove. Examining it is much more difficult in daylight. In low-light you might even miss blood obtained from a blood sweep. This is a pretty big deal. if you miss a bleed on your patient’s back he or she might well die if it isn’t treated. Is that worth the very modest benefit offered by black gloves?

To be fair I don’t know of anyone dying because a responder wore black gloves and couldn’t see blood on a blood sweep. But why take the chance unless there is some huge benefit to black gloves. Honestly, I don’t think there is.

Better Option 1: Literally Anything Else

Honestly, I think just about any blue, purple, white, or even pink nitrile exam glove is better than black medical gloves. These gloves make it much easier to see blood when conducting a blood sweep. They allow enough contrast that blood appears black on them in low light. 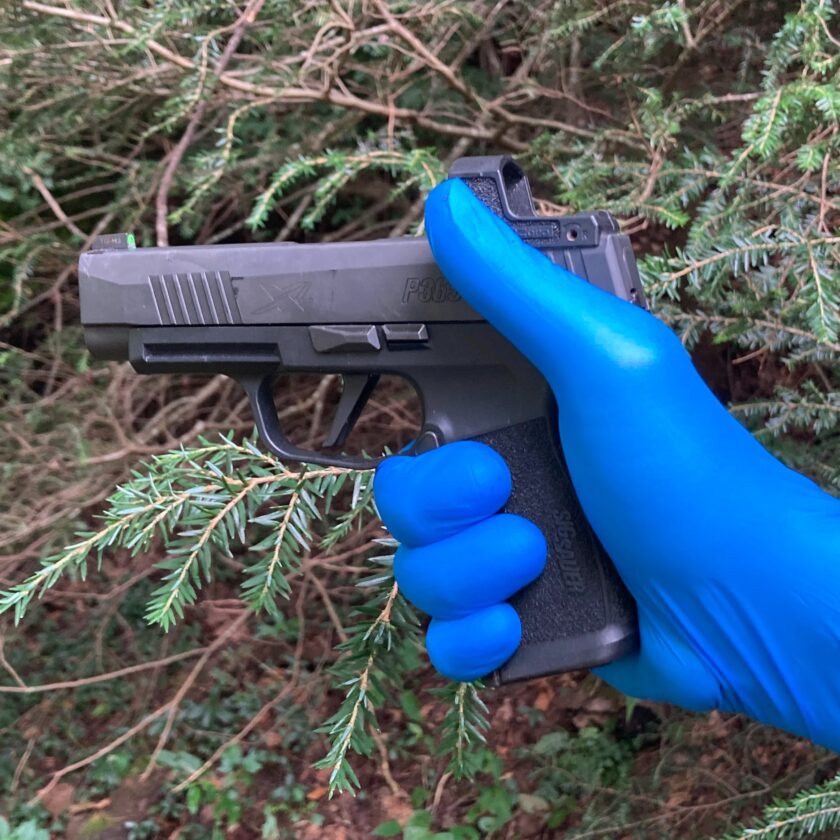 If you’re genuinely concerned about compromising your position with your gloves, avoid white, pink, and orange. The blues/purples are generally pretty dark, even if they don’t look quite as cool. And they do a better job at letting you see bodily fluids.

I think there’s a better option yet. You’ve seen it referenced in my IFAK article. I like sterile surgical gloves. I busted out a pair for this article. Sterile surgical gloves have a huge benefit: they are individually packaged. For a kit that is going to get carried day-in/day-out, this is pretty important to the life of your gloves. It protects them from moisture and grit. While it does increase bulk and access time a bit, I think this benefit alone is worth it. 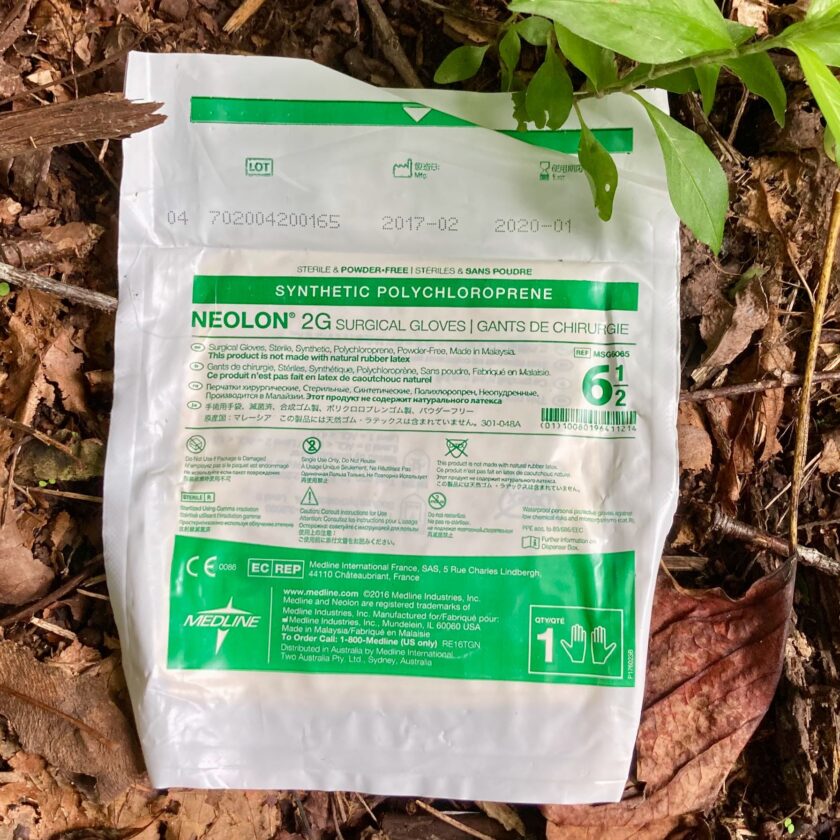 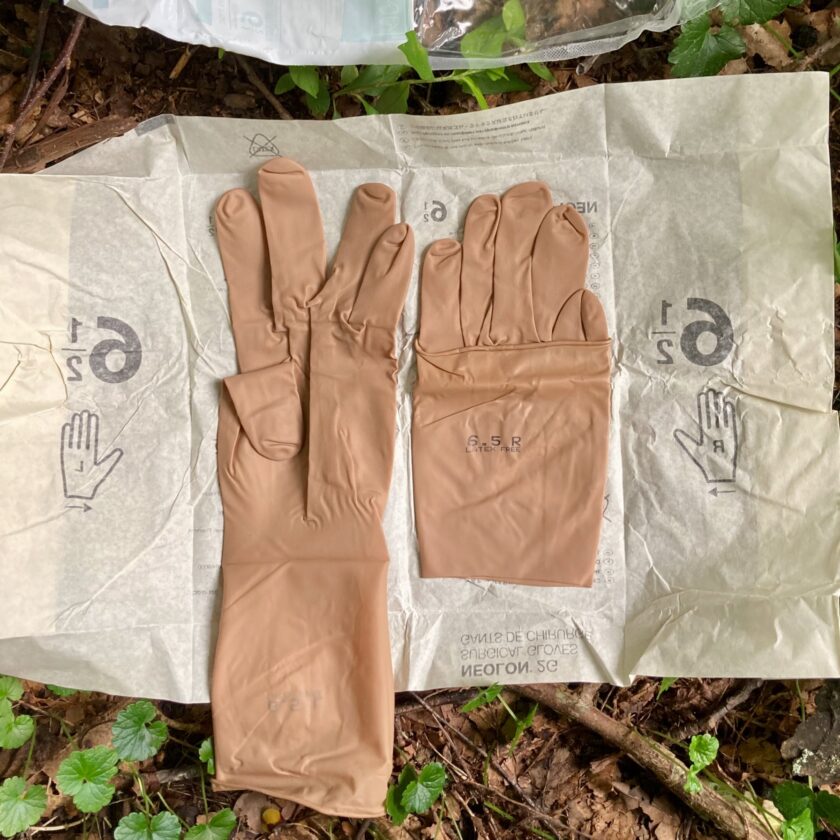 The biggest disadvantage is cost. Though sometimes you can find them as cheap as $1/pair, a box of 50 pairs of surgical gloves generally costs around $100. That’s only $2 a pair, but they are hard to find by the pair. I would love to see some medical kit companies selling individual pairs of gloves.

Do you even need gloves? Yes, you do. People are nasty. A person can look really nice, clean, and be well-dressed, but still have some nasty surprises. Alternatively, you’d hate to watch someone bleed out because they looked “gross” to you. Also don’t forget that your gloves protect the patient from whatever nasty stuff is on your hands. Dealing with infection can be as big a threat as the wound that caused it, so do everything you can to truly help your patient, even if its an un-sexy step like putting on gloves.

Black gloves will get the job done, but they aren’t the best. If you’re providing medical care you want to be able to see blood on your gloves. If you’re a cop patting someone down, you want to know you’ve got something nasty on your glove before you stick your hand in your pocket. Leave the black medical gloves to the black ops guys.

Get yourself some blue or purple nitrile exam gloves. They do the medical job better while providing no credible downside. If you want the absolute best gloves, get some sterile surgical gloves. They cost a bit more but are individually wrapped…and you can even find them in cool-guy coyote brown that’s both tactical and practical!

One more thing…  there may be a reason for black medical gloves that I’m missing. If I did miss something obvious, feel free to let me know! 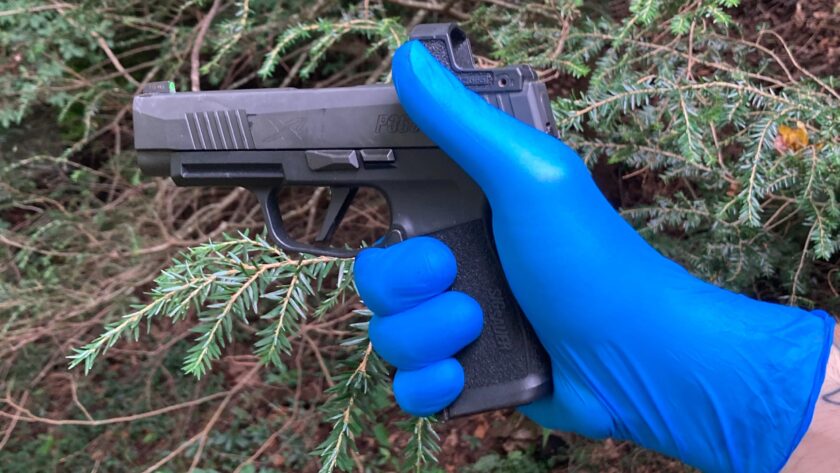