This week I finished Hate, Inc.: Why Today’s Media Makes us Despise One Another by Matt Taibbi. This is probably one of the most important books I’ve read in a long time. It explains how the media has divided us into two groups that are easy marks for advertisers. This is how media companies get rich reporting the “news.” It also explains the terrible cost of this wealth-building strategy.

This article started out as a couple of sentences in my October “goal progress update” and grew from there. Before I knew it I had 800 words and realized I felt strongly enough about this book to turn it into an article. I really do feel that understanding the “news” media’s role in dividing our country is incredibly important. I know this will be a pretty unpopular article, but it needs to be out there. If you don’t want to read this book, at least read this article that Greg Ellifritz posted on a recent Weekend Knowledge Dump. Both have a real similar tone/message.

The Problem(s) with Hate, Inc.

Hate, Inc. also explains the other massive problems this media model creates. No media outlet really has to worry about being wrong anymore. If MSNBC misreports something, they don’t have to worry about any of their audience crossing over to Fox to get fact-checked. The audience will never know that anything was misreported in the first place, because they’ll never leave their safe space where their views are never challenged.

Lest you think I’m in the Fox News camp, it’s exactly the same with Fox, too. None of the major news outlets are really peddling flat-out falsehoods, at least not usually. Instead, most of them report the truth but carefully craft the story by emphasis or omission. Here’s a good “for instance:” while Fox is happy to point out how dangerous blue cities like Chicago are, you won’t hear them talking about the fact that Memphis, in gun-friendly TN, is one of the most dangerous cities in America. Likewise, you’ll never see MSNBC interview an immigrant who has worked hard, started a business…yet wants strong immigration laws.

The Ten Rules of Hate Media

1. There are only 2 ideas.
2. The 2 ideas are in permanent conflict.
3. Hate people, not institutions.
4. Everything is someone else’s fault.
5. Nothing is everyone’s fault.
6. Root, don’t think.
7. No switching teams.
8. The other side is literally Hitler.
9. In the fight against Hitler, everything is permitted.
10. Feel superior.

Neither story fits with the narrative the “news” outlets have crafted for their audiences. The narrative is that all people on the other side are all exactly the same: every Republican is a homophobic racist, and ever Democrat is an socialist freedom-hater. This makes it really easy to demonize the other side. It gets to the root of the issue, too: we now hate our fellow Americans in record numbers. We hate these caricatures the news media has created. Now that our neighborhoods are becoming more homogenous by voting block, we actually know fewer and fewer of these people, making them even easier to hate.

It has also created yet another big problem: our “news” outlets are now cheering sections. Who is really holding the government accountable for anything? The short answer is: no one. One side is cheering the Ds on and ignoring their mistakes. The other side is cheering the Rs on and ignoring their mistakes. Since there is no crossover in viewership between networks, neither side ever hears their elected representatives criticized. Each audience literally believes their side can do no wrong. And networks would crucify a journalist who breaks ranks and reports something negative on their side, because it would challenge their audience and probably lose money.

That’s why you didn’t hear much on Fox News about President Trump declaring his clear support for gun confiscation via “red flag” laws. That’s probably why many of you aren’t familiar with his quote, “But take the guns first, go through due process second.” What about when he said, “I think they [the police] should have taken them [the guns] away anyway, whether they had the right or not.”? Think about the potential impact of those quotes – they are pretty scary positions for a “gun friendly” President to be espousing (with friends like these, huh?).

Instead of demanding an explanation for these remarks, right-wing media papered over them. They either pretended they didn’t happen, or acted as apologists (“he’s not as bad as the other guy might be”). The media is no longer a fourth estate, keeping an eye on a power-hungry government. Now the media is the mouthpiece of their “side” of government.

“If you must be a news consumer, be aware of the all the pressures laid out in this book. Remember the complex economics at work every time you click on a story or turn on the TV.

From the moment your eyes move to the screen, one company is selling you a consumer product, which you’re paying for by being subject to advertising, or through subscription. Meanwhile another company is selling *you* to another set of buyers. Your attention is one product, the data about your surfing behavior is another, and so on.

The news, the actual information in the middle, is almost incidental to these transactions. What matters is the amount of time you spend engaged. This is why you should always be suspicious of emergencies, indeed of anyone who tells you to worry about things you can’t control.”

Yes, the Author is Liberal

Taibbi admits his fault, his own mistakes in creating this dynamic. He’s written some incredibly dumb stuff, and he doesn’t mind telling you about it. And yes, he’s a liberal. Unfortunately, because of this one fact many people won’t like this book. It will challenge your† almost totally unchallenged view of your political party. This means it challenges most of your identities. After years of watching media and being embedded in social media that will bend over backwards not to challenge your beliefs, most of us just are no longer able to endure that kind of challenge.

In fact, some of you are probably challenged by this very review. You may be vaguely uncomfortable with the fact that I, a veteran who writes about guns, would even hint that someone with liberal leanings might have anything of value to say.

I recommend you push through your discomfort and read Hate, Inc., though. Sure, he dumps on the President you like. I know that is challenging and probably hurtful for you to read. But he also dumps on the other guy, too, which will probably make you feel a little better. Really, though, he dumps on the media in a really important way. He exposes the media for what it is: entertainment networks making millions by dividing us into two increasingly polarized camps.

Hate, Inc. points out the same call-to-action I’ve been making for years. Taibbi says: “It will be hard to keep concealed for long the obvious fact that turning off the news results in an instantly positive psychological change for most people. If you want to be happier, if you want to live in a world that may be thick with problems but is at least a sunnier place where people are more decent to one another and more willing to cooperate and show kindness, just turn off the tube.”

It will be hard to keep concealed for long the obvious fact that turning off the news results in an instantly positive psychological change for most people.

I’ve been saying it for years: turn off the TV. I did ten years ago and I’ve been so much happier for it. You don’t have to put your head in the sand. You should, however, probably limit your news consumption to a reasonable amount. Waking up to cable news, listening to talk radio all day, and seeing an endless feed of “news” on your phone all day is not making you happier. It’s not even making you better informed. Stop consuming news around the clock!

A Note For My Audience

Anecdotally, Hate, Inc. has also helped me understand one reason why this blog isn’t more popular. Most people only want to be told they’re doing fine and they don’t need to change anything. I won’t do that. I tell you regularly that you need to save money, read books, exercise, and be a good citizen. Most people want to be told that everything is someone else’s fault, and that nothing is everyone’s fault (these are two of Taibbi’s “Ten Rules of Hate”). Those of you who choose to read this blog regularly truly are exceptional. Thank you! 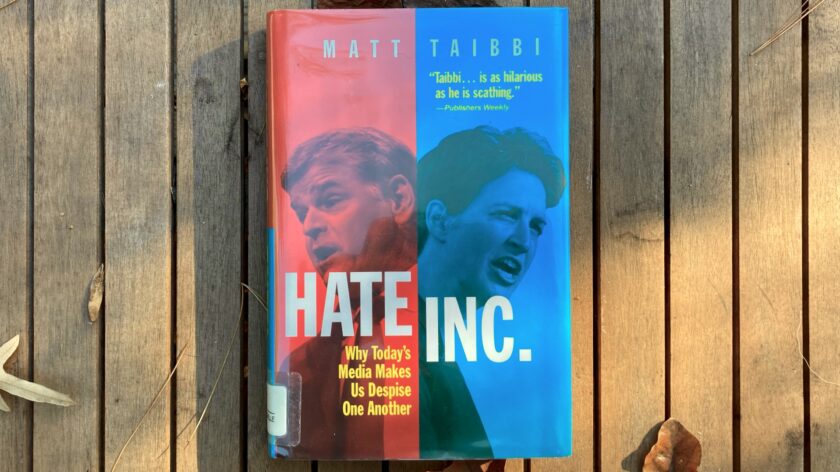 †I use the word “your” here because I don’t have a political party. This article hints at a lot of the reasons why. I also chose “your” because I don’t watch the news and I don’t use social media.