Today I’m going to talk about my generalist lockpicking kit. This kit is something seldom seen. Rather than a locksport kit, this is a functional kit. It’s designed to open – not pick – real-world locks in my AO.

I’m showing it mostly to show you how little stuff is in it. There is a lot of mystique out there about lockpicking, and you can definitely spend a lot of money you don’t need to spend. In the next post I’ll talk about what a bare-bones (even lighter than mine), minimalist kit would look like in case you’re putting a kit together. But first, I’m going to issue a bunch of caveats.

Caveat: Equipment is not Knowledge

Possessing lockpicking gear means nothing at all if you don’t know how to use it. This is a bit chicken/egg because you have to have a little bit of gear to learn. The balance comes in purchasing only what you need to get started and adding gear as your capabilities progress. At this time I have no plans to cover a lot of lock picking “how-to” here, but there are two ways you can go about gaining knowledge.

The first is through self-study. I strongly recommend Deviant Ollam’s outstanding book, Practical Lock Picking. I have yet to find a better text on the topic. Practical Lock Picking is richly illustrated with tons of drawings demonstrating how locks work, and how picking works, along with a few bypasses. There are also quite a few YouTube channels out there that will teach you lock defeat. The second is through live training.

Live, open-enrollment training in lock defeat is hard to come by. One class that has my tentative recommendation is Tactical Lock Picking with Pat Watson of the Uncensored Tactical blog and podcast. The reason my recommendation is “tentative” is I haven’t personally attended. I have reviewed Pat’s curriculum, spoken to him at length, and have reasonable confidence his class is good to go. Pat has a two-day class on the March 22nd in Tampa (enrollment includes take-home tools) if you’re interested.

Yes, that’s right, in some places lock picks are considered burglary tools and possession of them by non-qualified persons may constitute a crime. TOOOL (The Open Organization Of Lockpickers) has an awesome resource on the laws of various states available HERE. Knowledge of and compliance with the relevant statues in your locale or those to which your travel is your responsibility.

With that stuff out of the way, let’s get into what’s in my kit.

One thing you’ll notice right away is that my tools are pretty old and gross looking. There are none of the new crop of stylized tools. Some of my tools are homemade, and most of them are fairly inexpensive – there are no $18 ultra-light, Euro, deep hooks in here. This is also a high-probability kit. There are no tubular locks picks, cruciform picks, or other exotica. Even though tubular locks are really common, they’re only common on things that I can’t conceive of any reason I would ever need to get into. The stuff here are just the workhorse items. Let’s start with the case and picks.

A generalist lockpicking kit must have some picks. My case and most of the picks are from HPC. HPC makes decent stuff, but they certainly aren’t anything sexy. They’re just good, durable picks and to be honest I think the weight of them (on the heavier side) is about right for 99% of real-world locks found in North America. I’ve had all of these for 10+ years. Here are the picks that I think you need for pin- and wafer-tumbler locks: 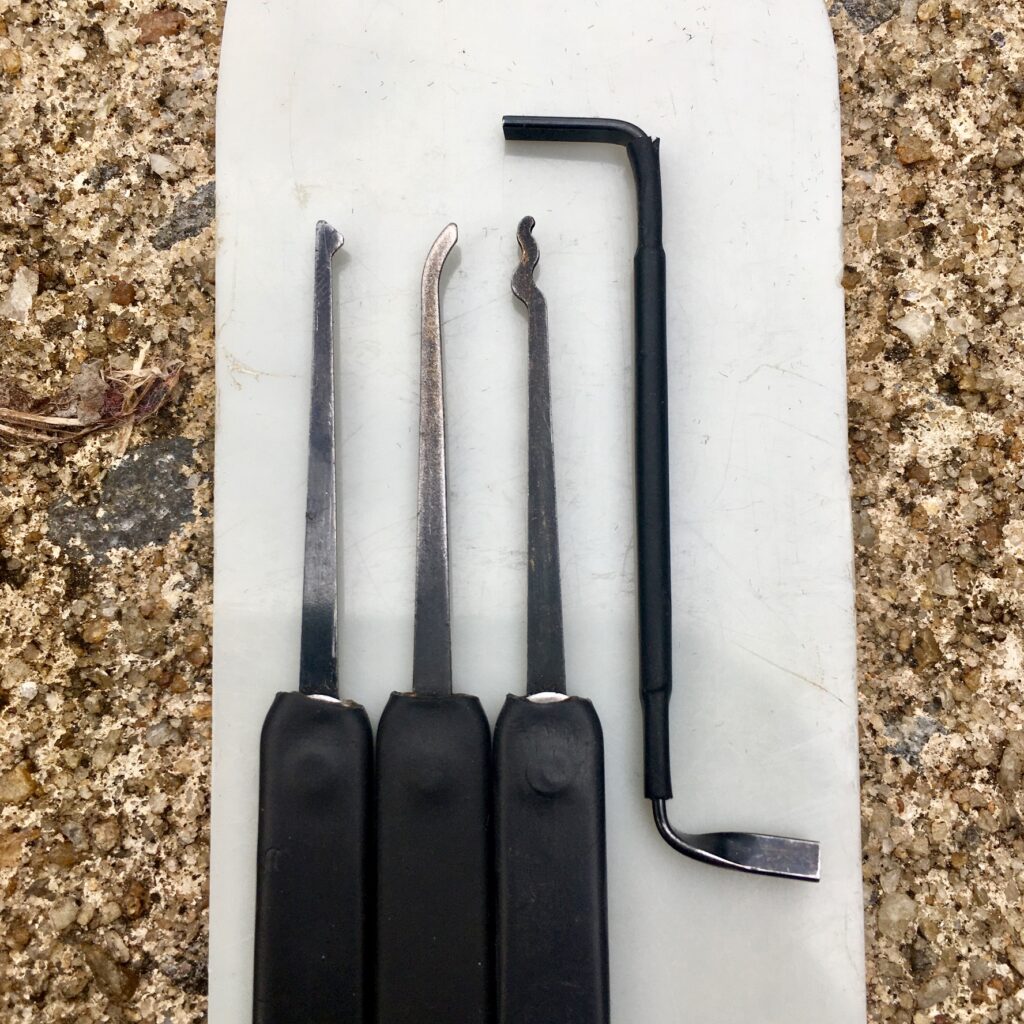 Now, that should tell you a few things. First, when you see that 95-piece set online this should make you realize you don’t need it. I have probably 500+ hours of professional lock defeat training, and I still haven’t outgrown these picks sufficiently to carry more or better ones. If in the future you actually do need all those esoteric picks, you aren’t going to want the cheap ones in the set – you’re going to want nice, high-end, individually selected items. Seriously, don’t waste the money, especially for a generalist lockpicking kit.

Secondly, this should tell you something about the nature of my kit: again, it’s not a locksport kit. It’s a very functional kit that is meant to open common padlocks and door hardware in North America – not anything the world can throw at me.

Now let’s look at tension tools. I like having a good selection of tension tools. If you can tension the lock sufficiently, maintain tension without over-tensioning or dropping it, and leave yourself enough room for your pick, you can get a lot of work done. Here are the tension tools I keep on hand (pictured below, left to right): 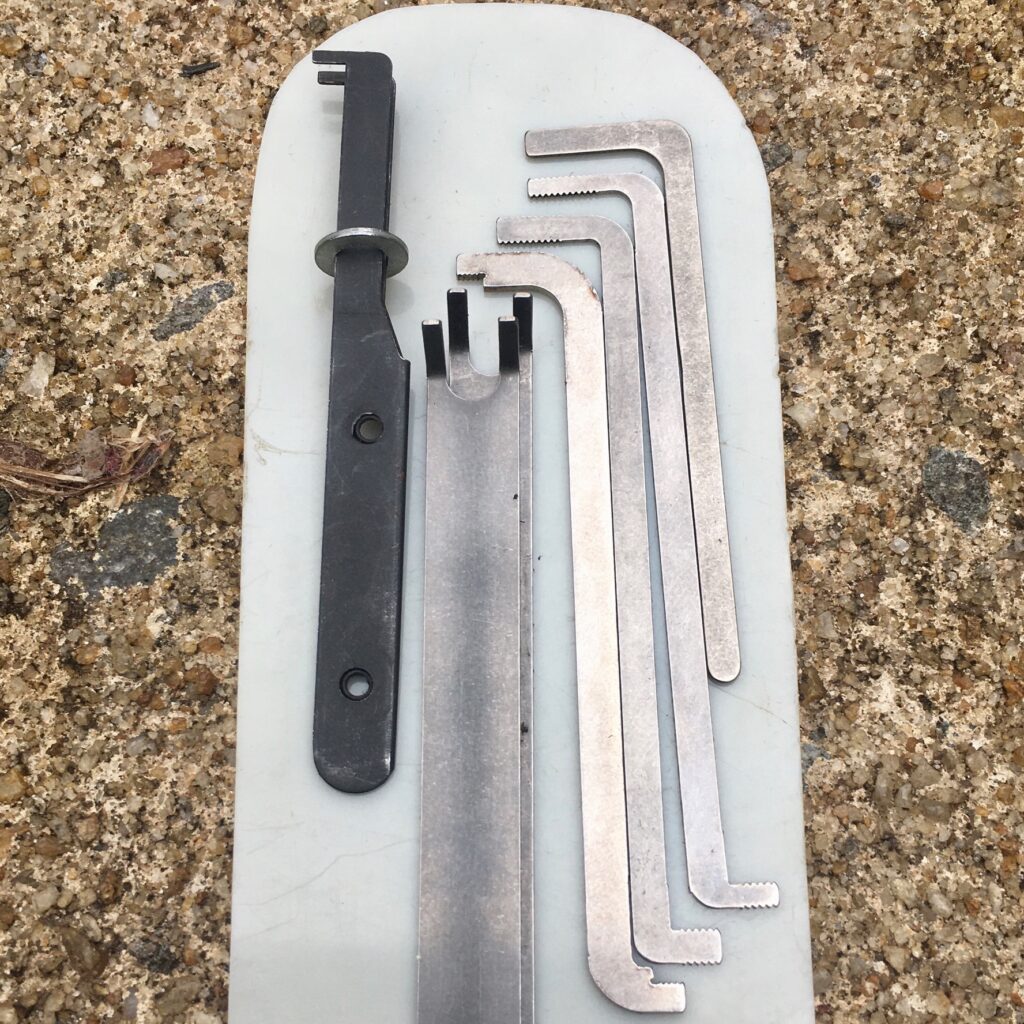 A quick note on terminology: I hate the term “tension wrench.” The word wrench mentally primes you to turn it like a wrench. I greatly prefer the term “tension tool” and have pretty much expunged “tension wrench” from my vocabulary. If you see it above it’s because I’m listing a manufacturer’s nomenclature. Also, this idea isn’t original to me. I learned it from somewhere – maybe a class, maybe a book, I can’t remember – but I’m not trying to take credit for it. Let’s move on.

Warded lockpicks are essential to a generalist lockpicking kit. Despite their very minimal security, warded locks are everywhere. They are sold everywhere and they are usually very inexpensive. Opening them is extremely easy if you have the right tools. Their commonality and ease of opening means I will always have a set of warded lock picks in my kit. There are four items in this category: 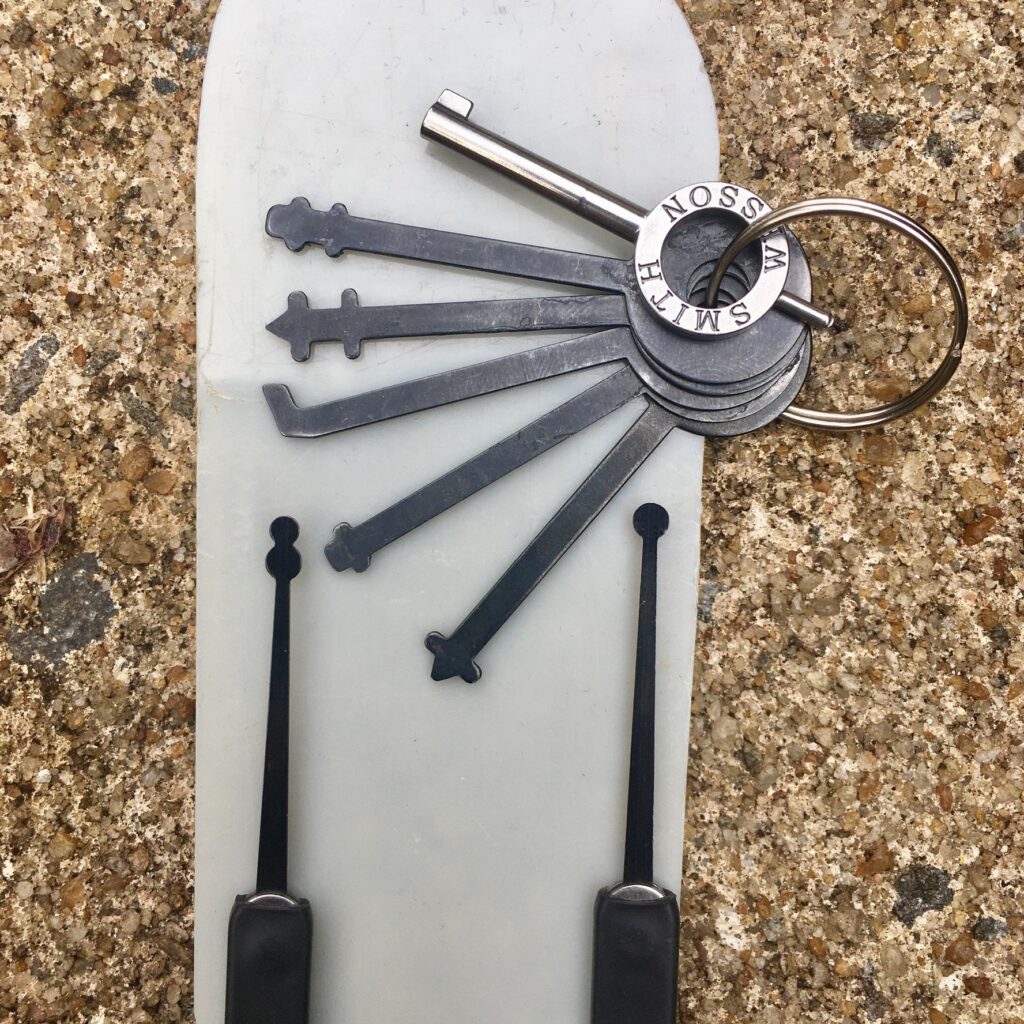 I don’t have tools to bypass everything – there are tons of bypass tools out there – but I do have some high probability tools. These are based on chances of success, penalty (in size/shape/weight) for carrying them, and likelihood of encountering that type of lock. Here’s what I got, starting from the back, then working left to right (in bottom photo): 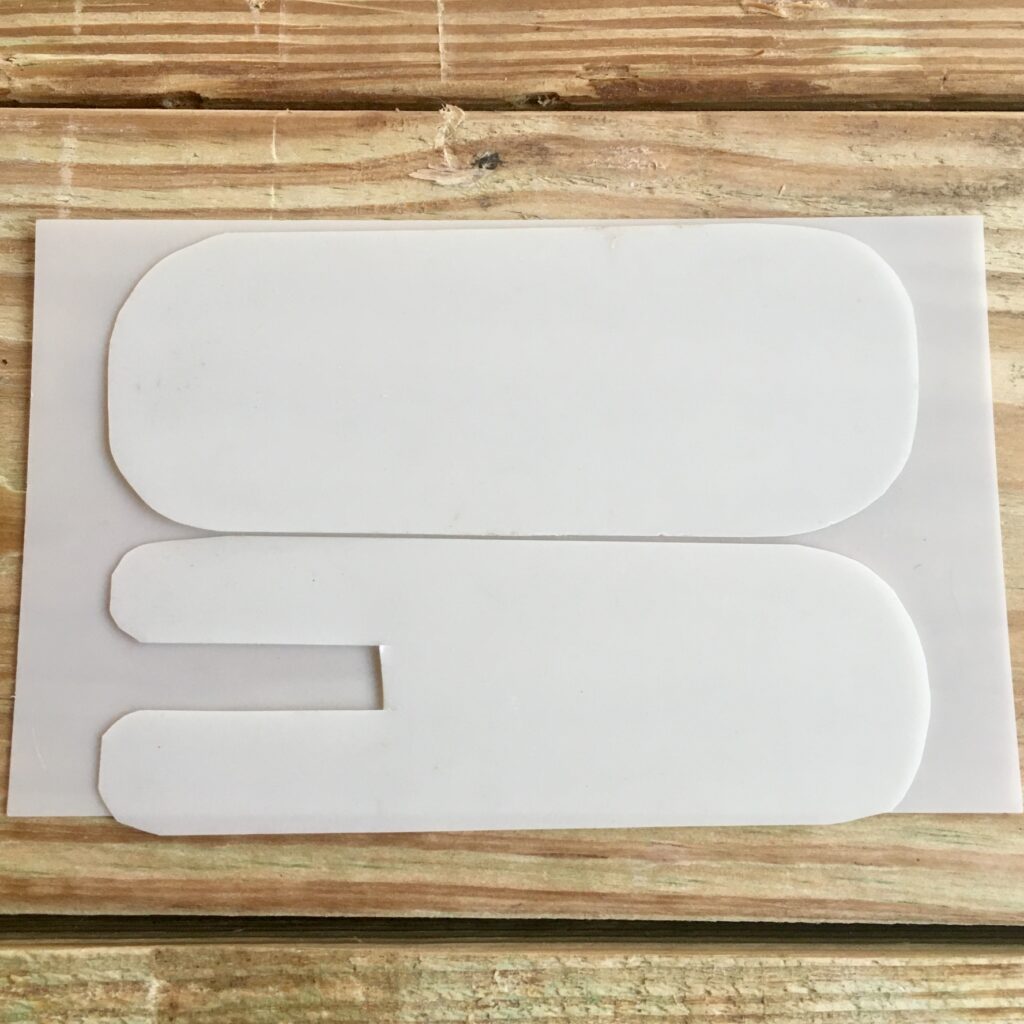 I wouldn’t be caught dead without a plug spinner if I thought I might have to pick open some door hardware. When you are picking a lock, sometimes it picks easier one way than the other (i.e. clockwise vs counter-clockwise, or vice-versa). Unfortunately, the lock will only open by turning the key in one of those two directions, not either one. If you pick it open in the wrong direction (by mistake or because it’s faster/easier), a plug spinner will spin it quickly back the other way so quickly that the pins won’t reset.

This isn’t something you see in locksport kits but it is crucial for a functional, generalist lockpicking kit. The one pictured is a Peterson which I love. Most of its parts are replaceable, and unlike a lot of plug spinners, it’s small and flat. At $55-50 it’s expensive, but I also like the Rytan plug spinner which is closer to $25, when you can find it. It and still has a nice, compact form-factor but if you break it you’re buying another.

And then I’m left with just a couple, miscellaneous tools to round out the generalist lockpicking kit. 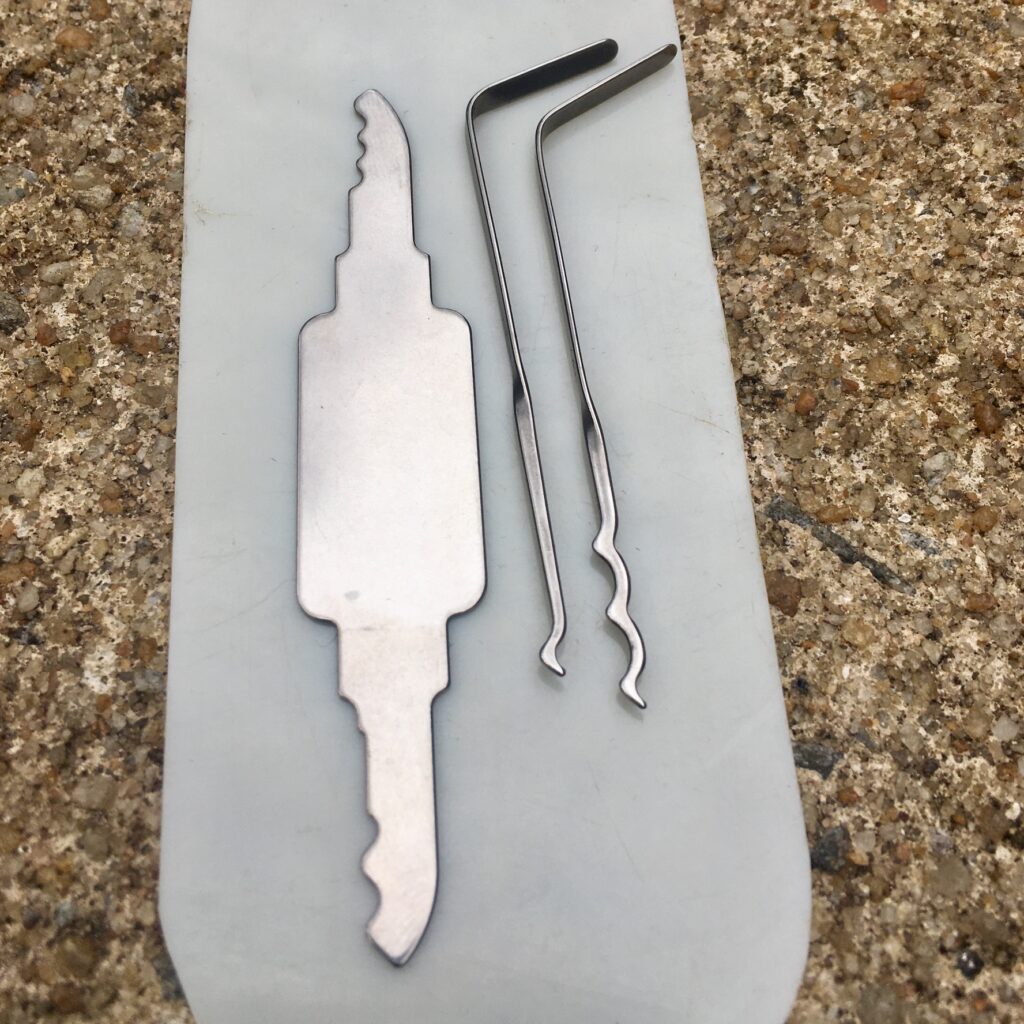 Again, none of these tools mean anything if you don’t know how to use them. If you don’t know how to use something I mentioned in this article, don’t run out and buy it. Master what you have and/or identify needs that your current equipment doesn’t meet. Honestly, I have some redundancy in here that I could weed out, too, but this case is still about the size of my phone, but just a touch thicker.

1 thought on “My Generalist Lockpicking Kit”