I have dry practiced every day this year and I dry practiced over 320 days last year. The vast majority of that practice has been with my carry gun. This necessitates a lot of loading and unloading of my carry gun, and some wear and tear on my carry ammo. This is how I manage ammo rotation with a heavy dry practice regimen.

There are a couple of concerns with loading and unloading cartridges more than a few times. First, the bullet can set pushed back into the case. “Bullet setback” can cause the bullet compress itself against the powder charge in the case. This can create a dangerous spike in pressure when the round is fired. I think is probably not super common in practice, but it is possible.

Second, repeatedly loading a cartridge can cause a breakdown into the primer, leading to the “loudest sound in a gunfight.” The slamming of the round forward, repeatedly, can cause the volatile compounds in primer to break up and/or be driven out of the primer. I have no idea how many times it takes to do this, but it’s probably quite a few. Still, we’re dealing with life support equipment, so tracking it is a good idea. 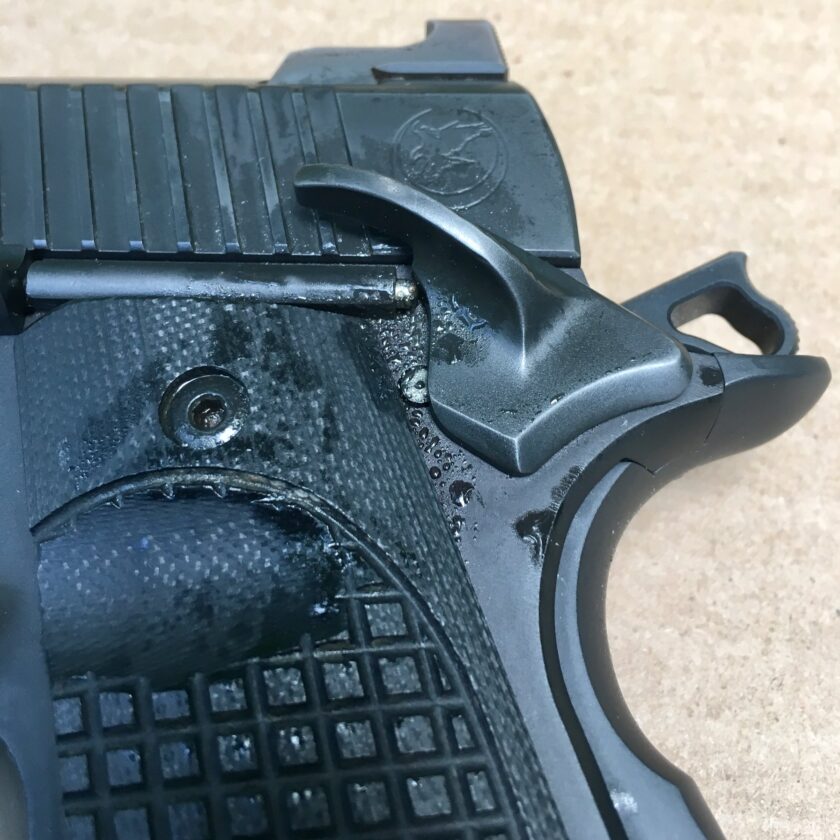 How to Rotate Ammo

People are all over the map about when to rotate your ammo out. Some people just rotate ammo out every year or six months. Some recommend swapping out rounds after they’ve been chambered as few as two times. Personally I think that’s a little overkill.  If I looked hard enough I’m sure I’d find someone saying they never chamber a round more than once. I think that’s a lot overkill.

Since I’ve been practicing on the daily for over a year and a quarter, I’ve developed a system. This system is intended to be as efficient as possible – i.e. not rotate more frequently than necessary – and allow me to easily track the age of my carry ammo. Here’s what I do:

Every Sunday I take the round out of the chamber, and the top round off of the magazine. All week long these are the two that have gotten cycled in and out of the chamber. At one dry practice session a day that means one of them got chambered three times and one four times. I could just discard them and drop two new rounds in on top, but that doesn’t really help me track the other rounds in my carry magazines. So, I mark the back of each cartridge with a red Sharpie. I unload my mag by hand, and put the two red-backed rounds at the bottom of the mag. 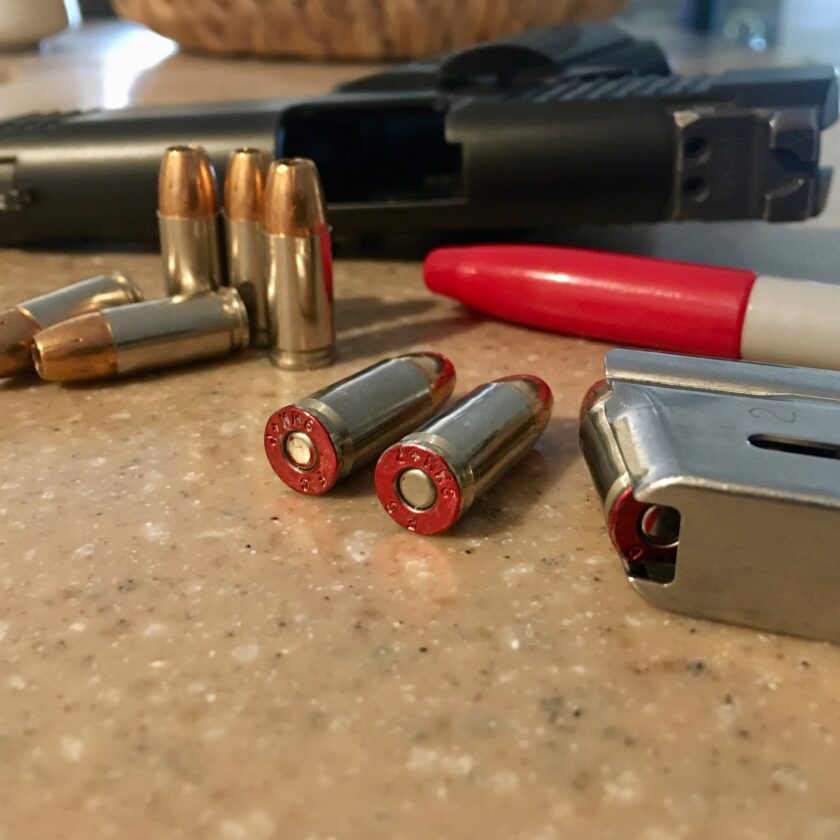 Next week I will do the same thing, except this time I will have two fewer rounds to unload because two of them are already red. Once I get to the point where eight (of my nine carried rounds) are red, I’ll unload them and move them to the spare mag, and the clean ammo from the spare mag will come over to the gun mag. Now, perfect world would dictate not carrying these rounds at all, but honestly, they’re still perfectly good. I’ve measured them and the length difference is within the variation for brand-new cartridges, so I’m not concerned about the rounds having been chambered a few times.

When all the rounds are red, I’ll swap the entire load out for new ammo. I carry eighteen rounds on my person: 8 in the magazine, 1 in the chamber, and a spare 9-round magazine.  At two rounds per week this means that I cycle through the whole loadout every nine weeks (two months, give or take). Regardless of what your magazine capacity is, the end result is the same. You’ll go through two rounds per week. That totals up to 104 rounds per year, a little over two boxes. You’ll pay a decent amount of money for that (especially now, if you didn’t plan well) but again, this is life-support equipment. 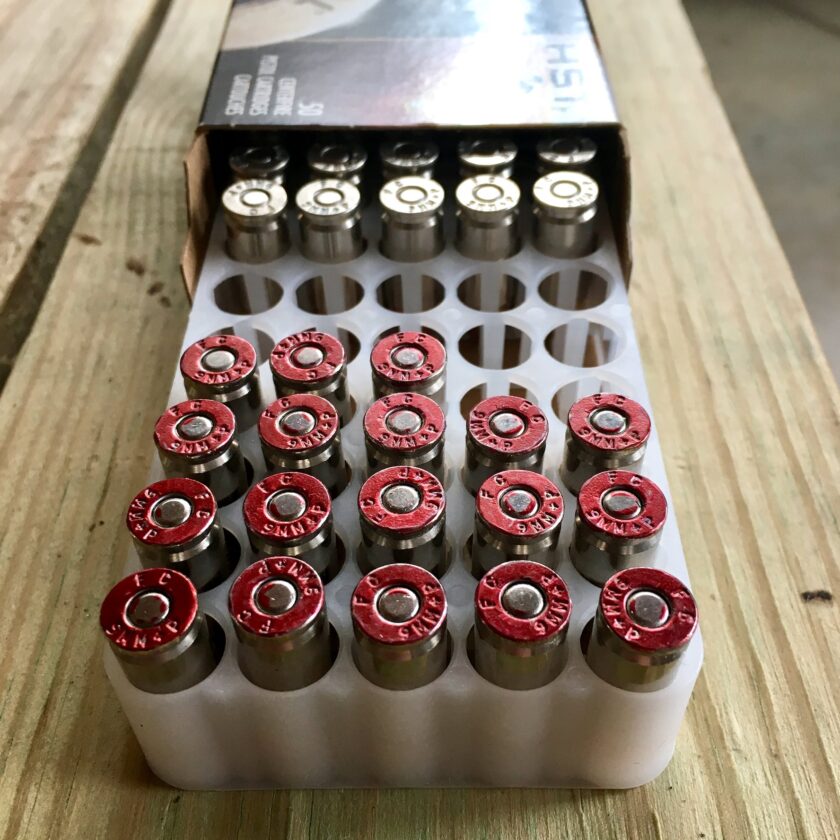 And you get to re-purpose that ammo when you’re done – it’s not just thrown away. Normally, when it’s about that time, I’ll head to the range and shoot those two mags, off my belt, exactly as I carry them. So far, so good – I’ve yet to have a malfunction with my carry load. If I can’t get to the range I’ll just empty them right back into the box. They’re very easy to distinguish from my new defensive loads, again because of the red Sharpie on the back.

No matter what system you use, use something. Make sure your carry ammo gets swapped out with fresh ammo every few months. Make sure a single round isn’t getting chambered dozens of times.

Edited to add: if you don’t like my system, check out Sunshine_Shooter’s. It’s admittedly much better for those with less regimented dry practice schedules and I really dig it.

2 thoughts on “Ammo Rotation with a Heavy Dry Practice Regimen” 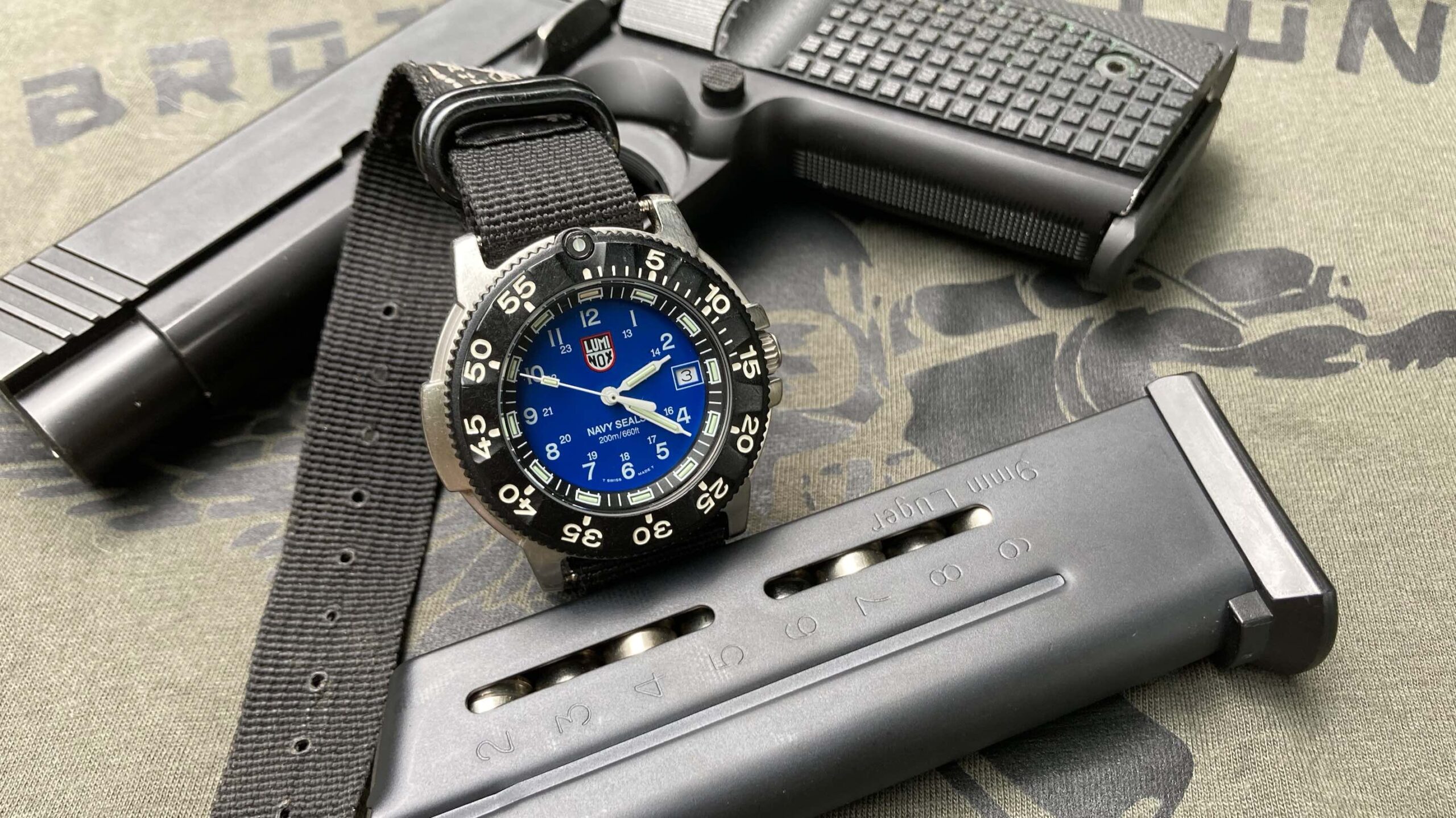 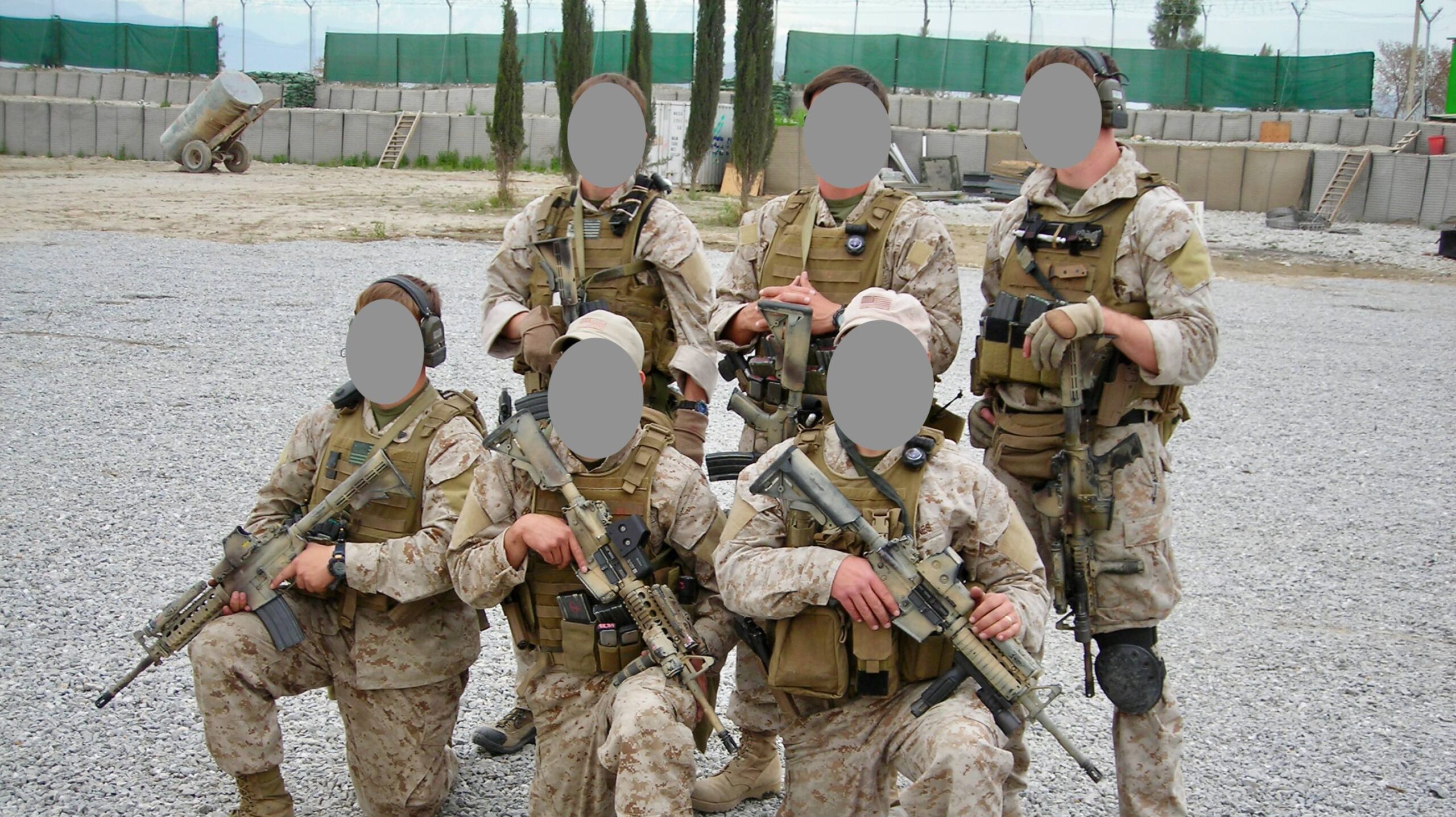 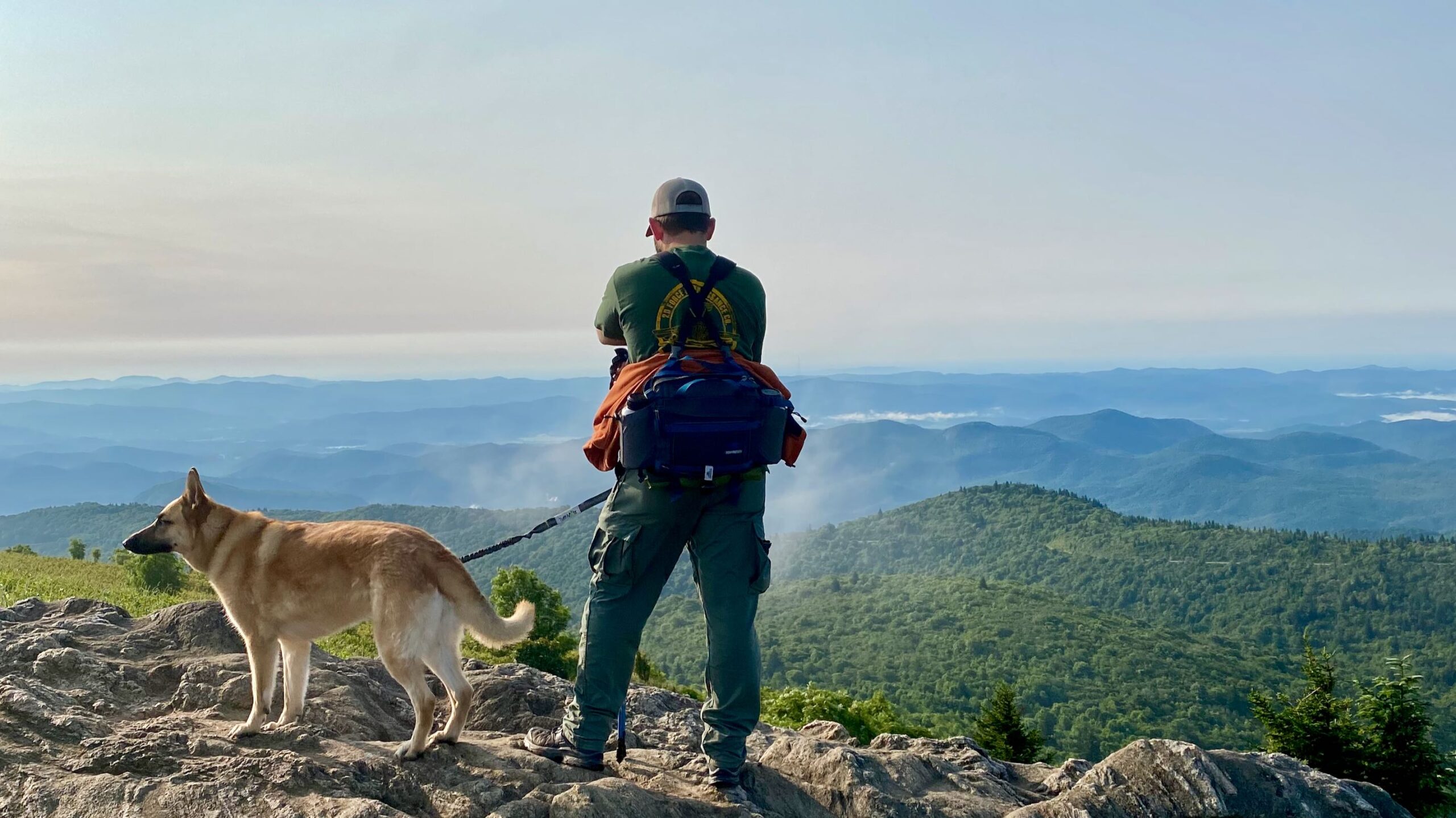