Today I’m going to post on some common key anatomy and nomenclature. I understand that this isn’t incredibly riveting information to most of you. For those of you with an interest in locks and lock defeat, however, this is very important groundwork. This post should serve as a useful reference for some of those future posts, as well as posts on securing your locks from various defeats.

Understanding keys is pretty important. They can tell you a lot about a lock. I know a few guys who have gotten into lockpicking and immediately began throwing away the keys to their practice locks. This is stupid in my opinion. There is a TON to be learned from the study of keys. Let’s look at some of the nomenclature of keys. 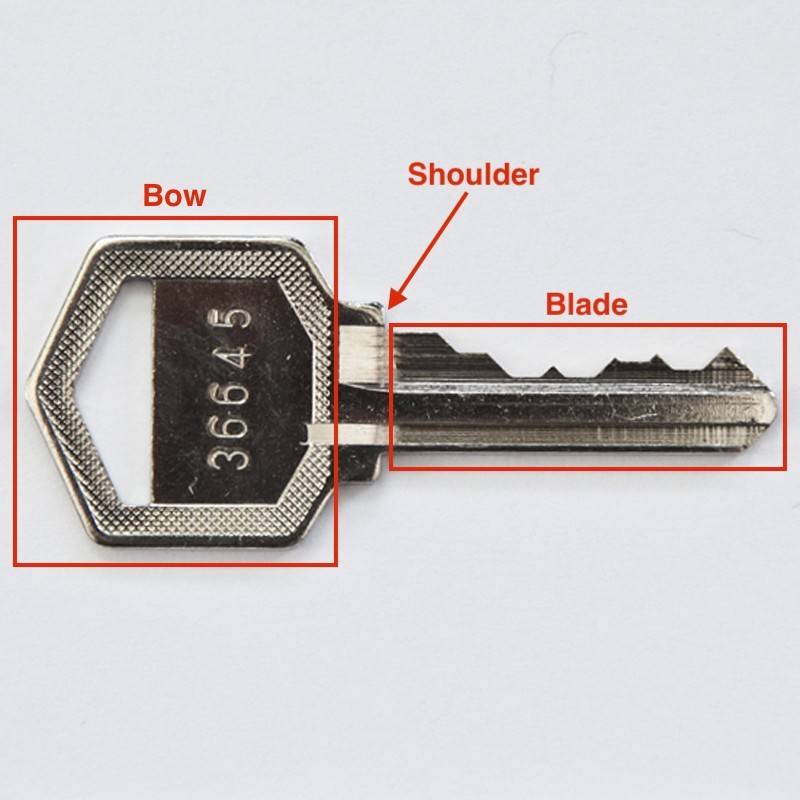 Bow: The bow (pronounced like “bow and arrow,” not “bow of the ship”) of the key is the “handle” portion of the key. The bow potentially contains a wealth of information. Sometimes a bow will be stamped or embossed with a code or the key profile. Almost always the very shape of the bow provides some information. It usually indicates the manufacturer of the lock.

Blade: The blade of the key is the portion that goes into the keyway. It contains the “bitting” which interacts with the lock’s tumblers.

Shoulder: The shoulder doesn’t seem very important but it is. The shoulder controls the depth to which you can insert the key into the lock. This ensures that the pins are all lined up with the correct cut on the key blade If the key went further in, pins would not sit flat in the cut beds, they would begin to ride up the backslope of the cut.

Cut Beds: The portions of the key blade where tumblers rest when the key is properly inserted into the lock.

Some keys lack a shoulder. Keys lacking a shoulder are “tip stop” keys, meaning their depth is arrested when the tip comes in contact with the back of the lock.  The Mul-T-Lock key below lacks a shoulder and is tip-stopped. 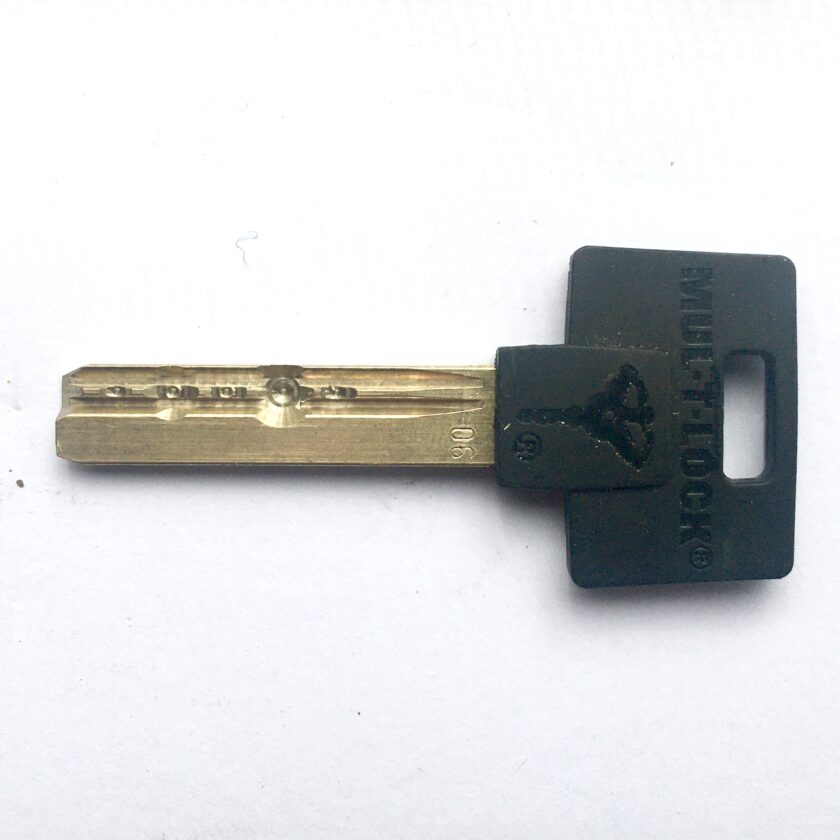 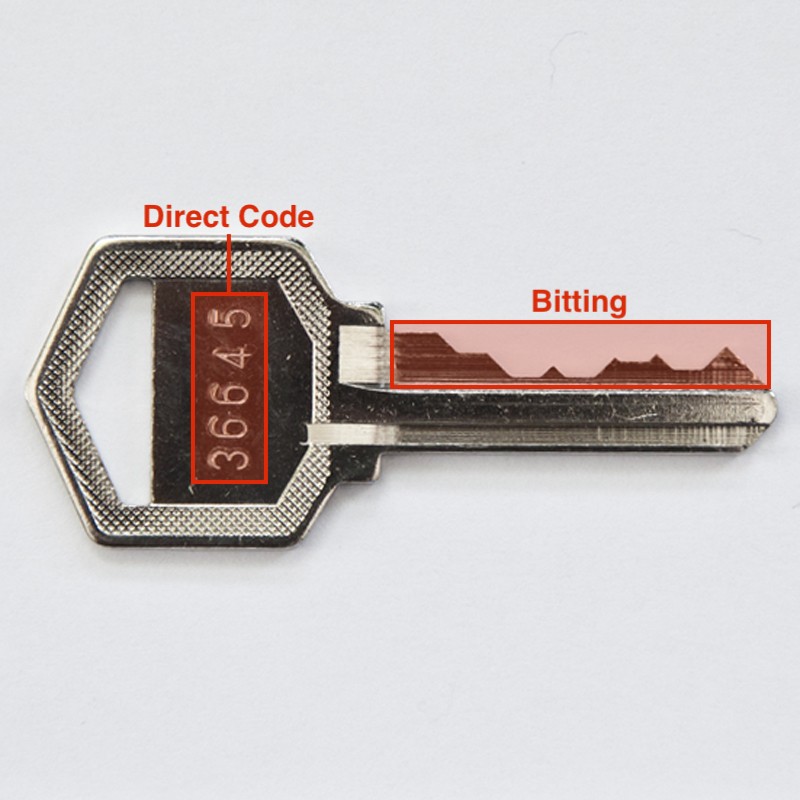 Bitting: “Bitting” or “bitted area” refers to the actual cuts on a key. Keys can be single-bitted, meaning cut only on one side like the example above, or double-bitted. The key below is double-bitted, or cut on both sides.

Convenience key: a key that can be put into a lock without regard to orientation, i.e. there is no way to put the key in “upside down.” The key above is a convenience key, as is (most likely) your car key, if your car still has a mechanical key. Your house key probably is not a convenience key.

Codes fall into one of two types – direct and indirect. A direct code has a direct, mechanical relationship to the cuts on the key. An indirect code does not, and merely serves as a reference number to look up the code in a database. The code below is an indirect code. 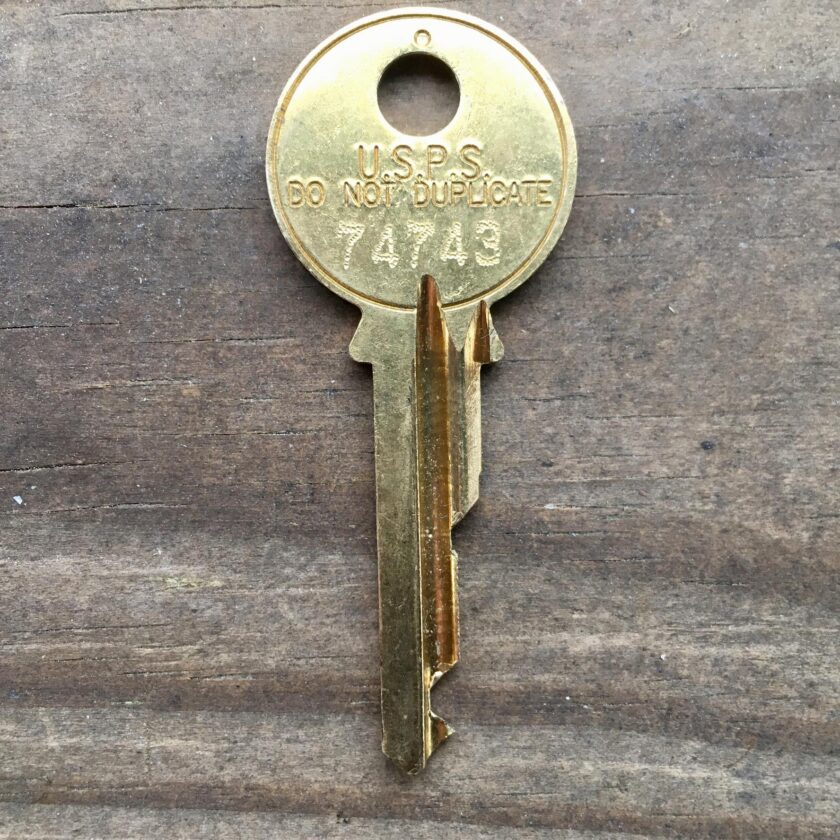 Sometimes it may not be so obvious. The two keys below are good examples; one is a direct code and one is not. Let’s look at the clues that help us decide if a code is direct or indirect. 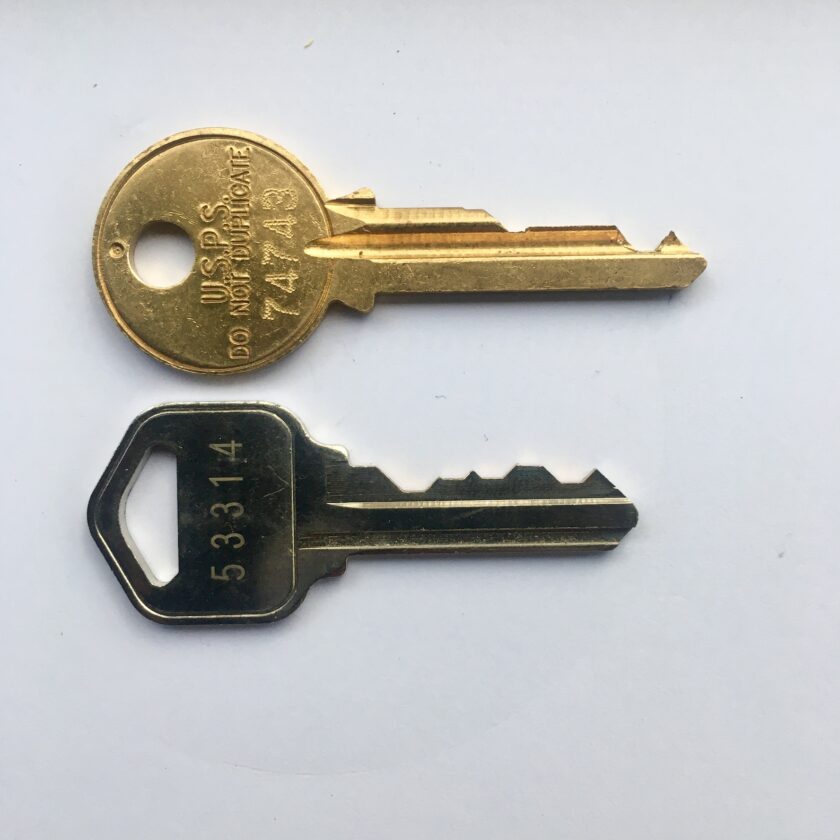 First, do the numbers make sense? On the bottom key, is the “5” in the code (presumed to be the cut closest to the bow) deeper than what we assume to be a “3”? Yes. Since there are two “3”s in the code, are there two cuts, side-by-side, that are identical in depth. Yes. Does everything else make sense, i.e. is the “1” shallower than everything else, and is the “4” deeper than the “3,” but not as deep as the “5”? Yes, yes, yes. We have a direct code, folks.

Now let’s look at that top key. First, do the numbers even make sense? The first digit is a “7” which we presume to be a deep depth, and we assume it to be close to the bow.  Is this true? No. Okay, so maybe their code numbers are backwards, with larger numbers representing shallower cuts (it is rare but happens). Let’s assume 7 is very shallow – does this work? Yes. The next number is a 4, which should be significantly deeper than a 7; is that reflected on the key blade? Nope.

Let’s also look at duplicate numbers. There are two “7”s and two “4”s. This means we should have two sets of two cuts on the bitting that are the same depth. Do we have them? There do appear to be two cuts that are the same depth, but they are adjacent each other, not separated by another cut.  At this point I am ready to rule out this being a direct code.

OK, there is one last thing we can try just to be completely satisfied that this is not a direct code. We can also start at the tip; it’s possible some keying systems record their codes from tip-to-bow instead of the much more common bow-to-tip for shoulder-stopped keys.