With ammunition at record-high cost and record-low availability, hitting the range might not be an option for many of you. Articles abound about how to continue firearms practice during the shortage, most involving some sort of dry practice. It seems like everyone is on the bandwagon and dry practice is no longer just for weirdos like these guys. Some exciting new tools are available to make dry practice more productive and engaging; one of the most interesting is the Mantis Blackbeard.

Full Disclosure: Last year I reviewed the MantisX system, and I was provided with a Mantis Blackbeard for this review. This is not a paid review. I didn’t let anyone at Mantis see my review before publication. Other than sending a broken unit back for replacement I had no other communication with Mantis prior to this review.

The Mantis Blackbeard is an auto-resetting trigger system for your ARs. It allows you to dry practice many rounds at a time, at realistic speeds, without pausing to manually reset the trigger. According to Mantis’ literature the Blackbeard will function as fast as 10 rounds per second, though I doubt my finger moves quite that fast. Point being, it’s very hard to outrun the Blackbeard.

The Blackbeard consists of two parts: a replacement, drop-in bolt carrier unit and a magazine. Both are plastic, and both are bright red for instant identification. The Blackbeard system cycles your trigger, allowing you to dry practice without having to rack the charging handle. How does the Mantis Blackbeard cycle the trigger? I’ll be honest: I have no clue. There is a plastic pistol that seems to interface with the hammer…but beyond that I have no idea and I gave up trying to figure it out because…it just works. 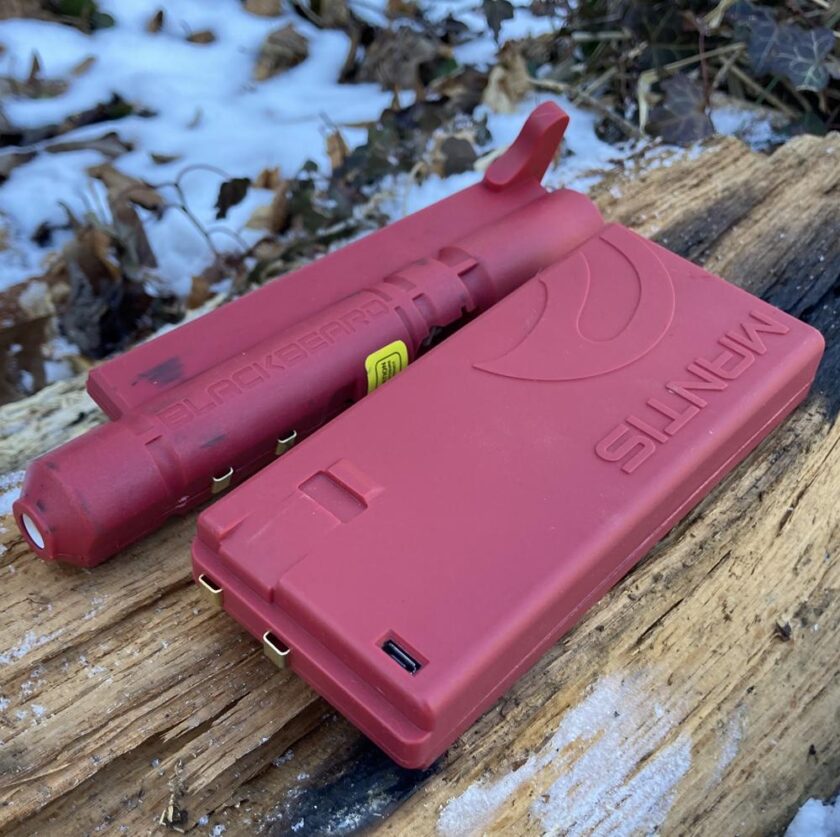 The Blackbeard is also available with and without a laser. The laser is embedded in the bolt carrier portion of the unit and shoots down the bore. It is easily adjustable through your rifle’s ejection port and is illuminated for a split second after you take a shot. Personally I think the laser is a pretty big value-add, especially at only a $20 upcharge for red ($50 for green or infrared). The unit I was provided shipped with a green laser. 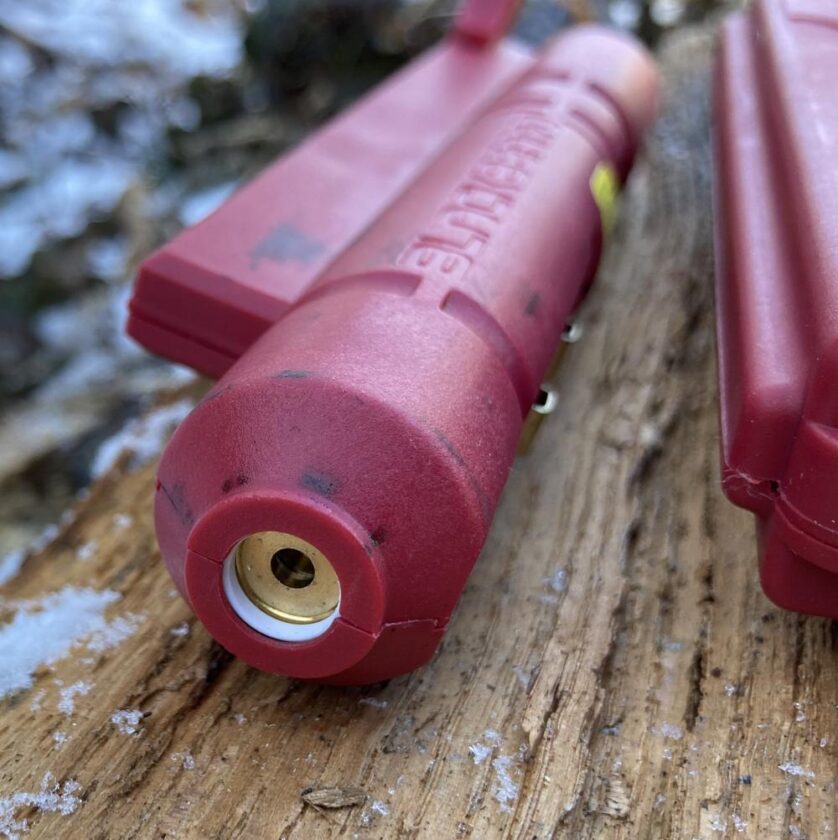 The second part of the Mantis Blackbeard, the red, plastic magazine, houses the unit’s battery. The battery charges with a micro-USB port. It takes several hours to completely charge, but once charge lasts a long time – a battery should be able to make it through several decent dry practice sessions. The unit ships with its own micro-USB cable but I found myself using a longer cord I had lying around.

Let’s take a look at using the Blackbeard. 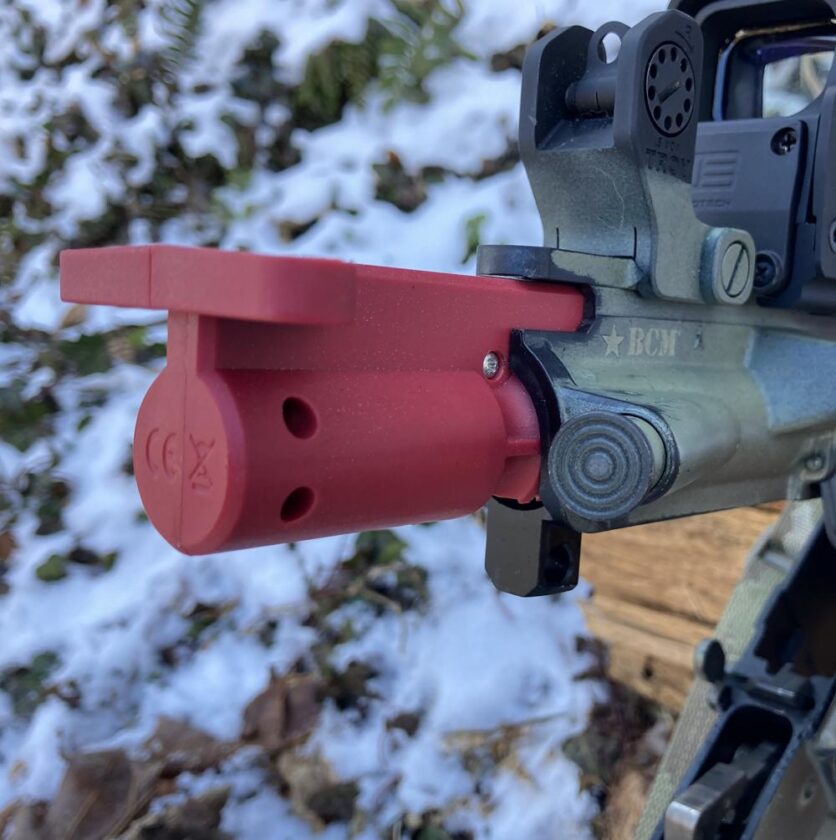 Once the bolt carrier assembly is in, close up the receiver and insert the magazine into the mag well. I would caution against slamming the magazine in. I actually received two Blackbeard units, and I’ll talk more about that in just a bit. For now just trust me – don’t slam that magazine in. Push it in firmly until it locks. The magazine contains the unit’s battery, and has to make intimate “charge to target contact” with the contacts on the carrier group. When the magazine seats you may hear some some cycling of the system (to ensure you’re gun’s hammer is back) and the system is ready to go.

At this point if you have a laser you will wish to zero it. I had no issue zeroing the laser at all. The adjustment screws are available through the ejection port, and the laser can be put into an “always on” mode for zeroing. Now you’re ready to get to work. 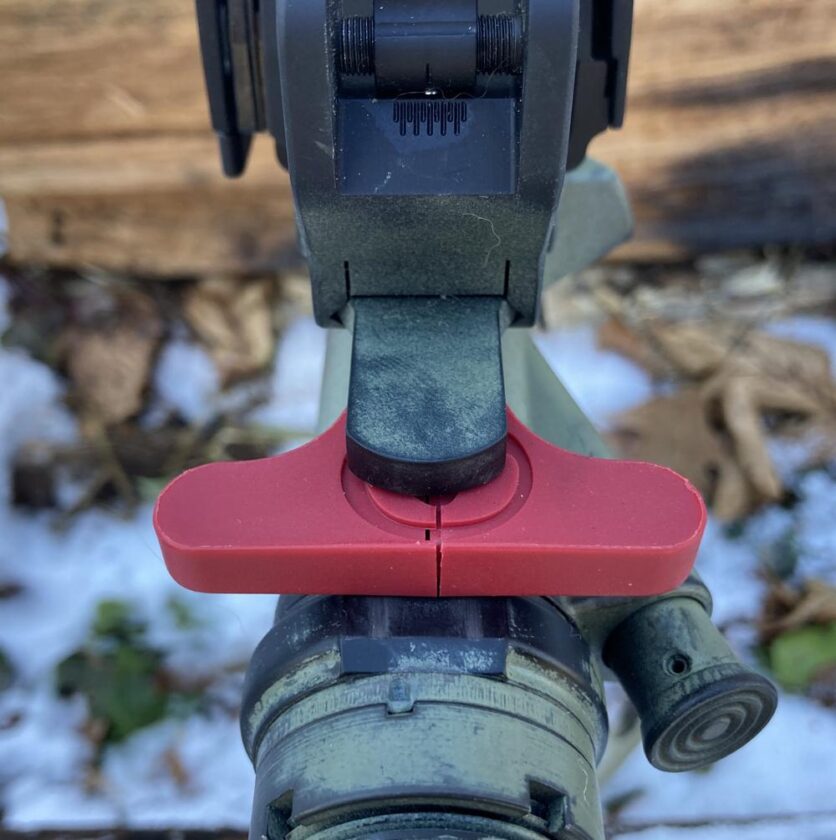 Even though I did (and do) most of my AR dry practice with the Blackbeard at closer ranges I regulated the laser for 25 yards. This let me work barrel/sight relation (or mechanical offset, if you prefer) with every press of the trigger and actually see where the shot would have impacted. I mostly spent my time working “up” drills. To vary this theme a bit I practiced with irons sights, my EOTech, and using my weapon-mounted light quite a bit, as well. 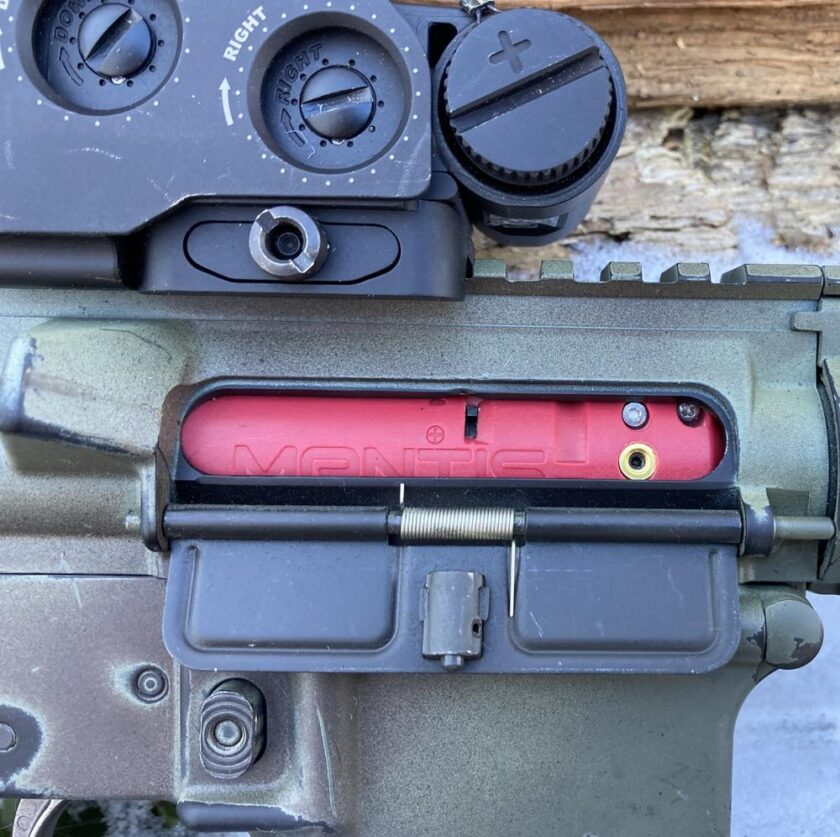 Even though I have extolled the virtues of dry practice ad nauseum, I’d like to briefly hit it again. I did several range sessions in the past few months with my AR. Prior to each one I spent 20-30 minutes dry practicing with the Mantis Blackbeard. I found that my sessions – which are somewhat infrequent these days, due as much to demands on my time as the cost of ammo – were massively more productive than when I didn’t use the Blackbeard beforehand.

Of note for your urban dwellers: the Blackbeard makes very little noise. I have dealt with the noise issue of racking slides before, and it can be an issue. There is a bit of a “pew, pew, pew” sound – sort of an electromechanical, servo-sounding whir on each shot. It is quiet enough that I would have no problem using this unit even in the most densely populated of apartment buildings. As I said it’s quiet, and it is highly doubtful anyone would recognize it for what it is. 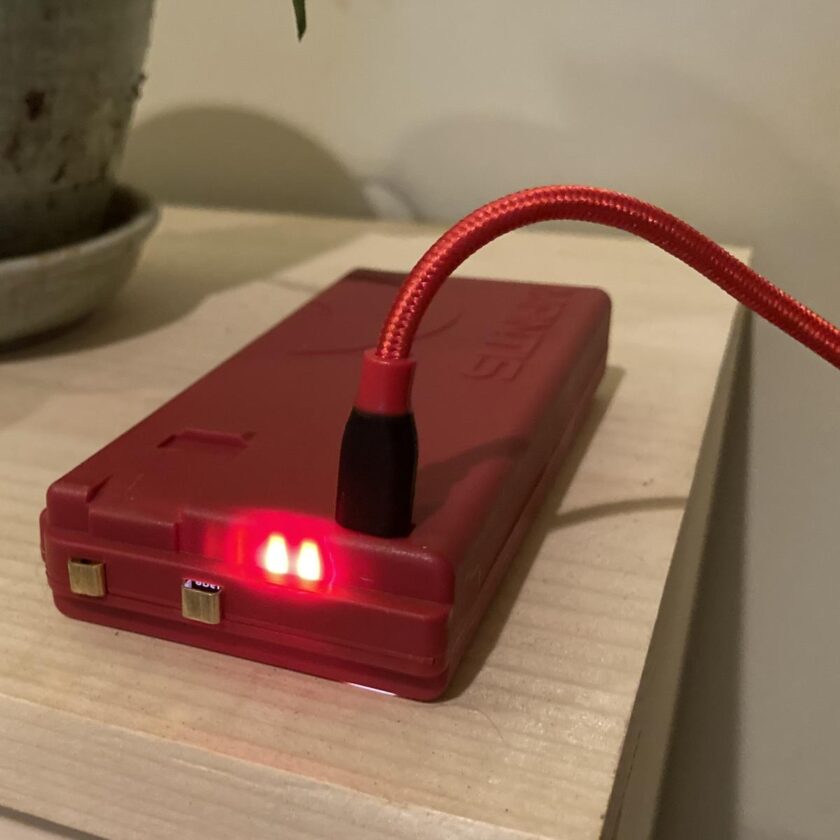 I have to admit that the Mantis Blackbeard made carbine dry practice way more interesting and – dare I say it? – fun! It is certainly less tedious than firing a dry “round” and then having a dead trigger, and allows you to work a broader set of skills. You may recall that I wasn’t in love with the CoolFire system – while neat it was very complicated. The Mantis Blackbeard on the other hand seems relatively simple, low-impact, and without the need for expensive consumables. I have really enjoyed using it. But would I recommend buying one?

The Mantis Blackbeard costs $199 (no laser), $219 (red laser), and $249 (green or IR laser). Though certainly cheaper than a case of ammo, that’s a good deal of coin. I think the capability is worth it to the user who will get out there and make it worth the money by using it a lot. But there’s where I have some reservation. The unit feels very cheap. The bolt in both  units I handled felt very solid, but in the one I currently have the battery rattles around inside the body of the magazine. Not exactly confidence-inspiring on a $250 product. Which brings me to the broken unit…

I sent my first sample (which was provided by Mantis) back because it failed. I’m not sure what happened but the third time I installed it my AR became a “runaway” gun. As soon as the battery contacts hit the bolt it would cycle a couple dozen times…then nothing. I’d take it out, reinsert it, same deal. Now, that was very, very early in production, and judging from reviews I’m not the only person to have this issue early on. Fortunately judging from reviews Mantis’ customer support is excellent and you should have no issue getting a replacement unit if yours dies.

The Mantis Blackbeard is a total game-changer when it comes to carbine dry practice. You can actually “run and gun” the trigger and – with a laser – get some feedback about where your shots are going. This is a very cool system that puts some novelty back into dry practice. Personally I’d like to see the quality come up to that of their MantisX system (which really is a high-quality piece of kit) before investing my own money in one. If you’ve got the money to spend, though, it’s probably worth your while. 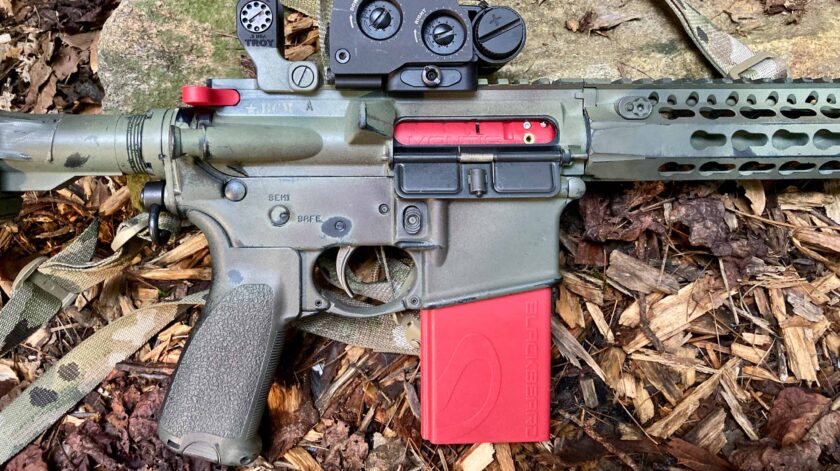