Last week I posted a video on Patreon of me shooting what I called “the Eli Drill.” This is a 40-yard pistol drill quickly developed after the Greenwood mall shooting. Since posting that video I’ve gotten several questions about long range pistol shooting. I’m no expert but I’m glad to offer a few tips that have helped me.

The Dicken drill has sparked a ton of interest in long-range pistol shooting lately. The drill mimics the actions of Mr. Dicken, the hero who stopped a mass shooter at the Greenwood Mall in Indiana. It consists of firing 10 shots in a time limit of 15 seconds at 40 yards, with an accuracy standard of at least 8 hits anywhere on a man-sized target. Here is some video of me shooting the Dicken Drill (which I called the “Eli Drill”) that I posted on Patreon last week.

Not satisfied I went back a couple days later and shot this same drill at 2.5x the distance: 100 yards. I failed by the speed standards of the original drill, being unable to make 8 of 10 hits in 15 seconds. Still, I think I did OK considering the distance. Hopefully I did well enough that you’ll trust a little advice I’d offer on long range pistol shooting.

Today I offer you a few tips that really help me when shooting at distance. I’m not an expert on long range pistol shooting, but it is a skill I’m pretty competent in. I hope to offer a few tips that can help improve your skill. I also really recommend you try out Lucky Gunner’s article on shooting better at 25 yards.

Get Good at Close Range Shooting

First, I simply mean the ability to shoot very tight groups. Can you clean the Dot Torture drill at 3 yards? Five? Seven? If not you probably need to work on basic marksmanship fundamentals of stance, grip, sight alignment, sight picture, and trigger management. If you can only shoot an 8″ group at 10 yards, that’s a 16″ group at 20 yards, and a 40″ group at 50 yards. Sixteen inches is about the width of a silhouette target, and 40″ is not much better than pointing in the general direction of the target. 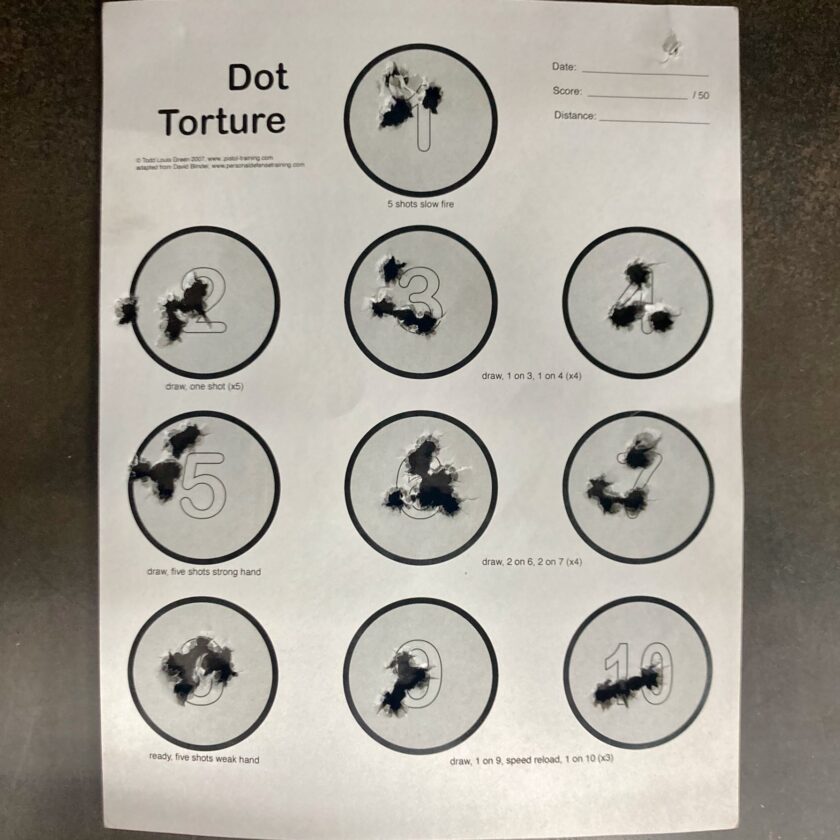 Developing that skill takes a lot of time, however. Fortunately you can develop much of it through dry practice.

To be good at long range pistol shooting you should be unconsciously competent. This means that you can perform the task of shooting without really thinking about it. This frees up mental bandwidth for stuff you need to really focus on. I find that when shooting at long range you will devote a lot of your attention to focusing on your sight picture. This won’t leave you with the mental capacity to also focus hard on trigger control and grip and everything else – those things should just happen.

You will achieve unconscious competence through hours and hours and hours of repetition spaced out over time. No one becomes a martial arts expert in a five-day class, or several two-day weekend classes. Shooting is no different. It requires hundreds of hours of disciplined study to reach unconscious competence. I have two documented years of (almost) daily dry practice following hundreds of hours of professional training and tens of thousands of rounds on the range. I don’t say that to brag or discourage you; I say that to encourage you to seek training, dry practice, and do hard, designed practice sessions.

To do this focus your vision on the front sight. You should be able to see ever line and scratch and imperfection on that sight blade. The rear sight will be slightly blurry, and the target will be very fuzzy. That’s OK – let the target be fuzzy. Now super-impose that crystal clear front sight over the fuzzy target. Maintain this front-sight focus throughout the trigger stroke, until the shot breaks.

A common mistake I made when I started shooting pistols at 50-100 yards was to assume I needed a high holdover. I find I still want to pull the gun up much higher than it needs to be for the first shot or two. With a 9mm your bullet will probably hit between 6″ and 12″ lower than you’re used to at 100 yards. With a .45 ACP…well, I don’t really know but if you carry a .40 or .45 or .38  or whatever, the best way to find out is to get out and test it. Hell, if you carry a 9mm you need to get out and test it; your barrel length and ammo choices and other factors might make it different than my experience would indicate.

One thing I see people doing when shooting at distance is slowing down their draw stroke. The pistol will come out and up to the eye-target line super, super slowly. Don’t do that. Draw as fast as you would at three yards: as if your life depended on it. This buys you time once the gun is out. Don’t waste time slowly pulling the gun from the holster – get out, get it in front of you, and use that time to align your sights. 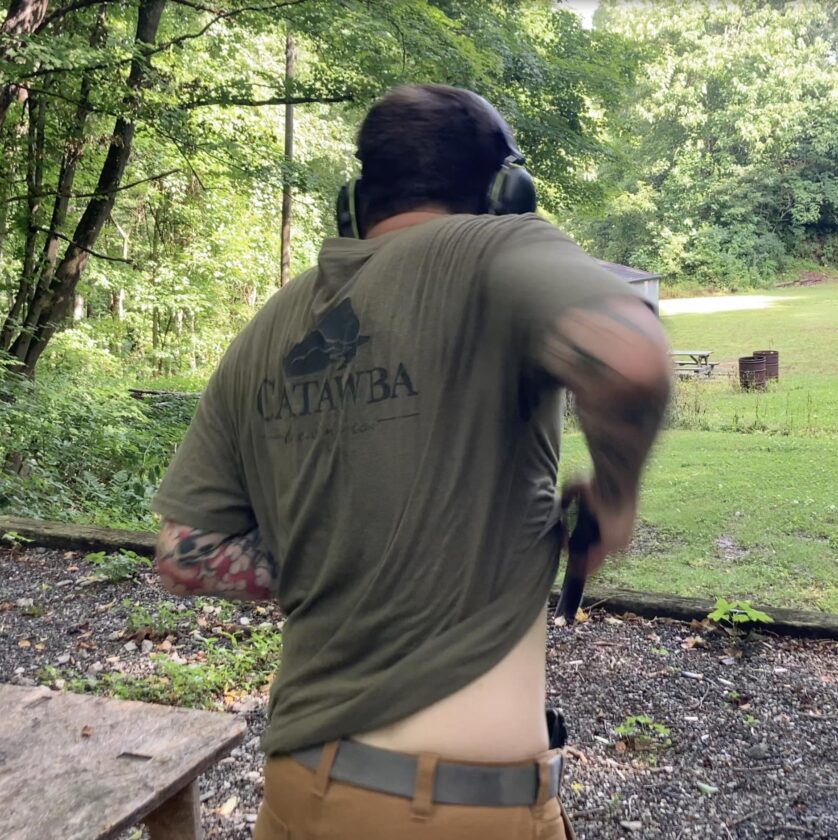 This is especially true on timed drills/stages…and if someone is shooting at you. Being slow out of the holster doesn’t make you more accurate, it only consumes precious time. If you’ll notice in the video my gun was up within about a second…but I took about two seconds to align my sights before the first shot. Move fast, shoot slow.

There’s really no substitute for this one. If you want to be good at long range pistol shooting, you have to get out and shoot pistols at long distances. I’ve heard someone say if you want it all you have to do is be willing to work your ass off to get it. That’s true here. If you want to be good at far-shooting, work at far-shooting. After you’ve become pretty good at close-range shooting, of course. If you can’t hit a 8″ circle at 15 yards, you’re probably not going to hit it at 75. 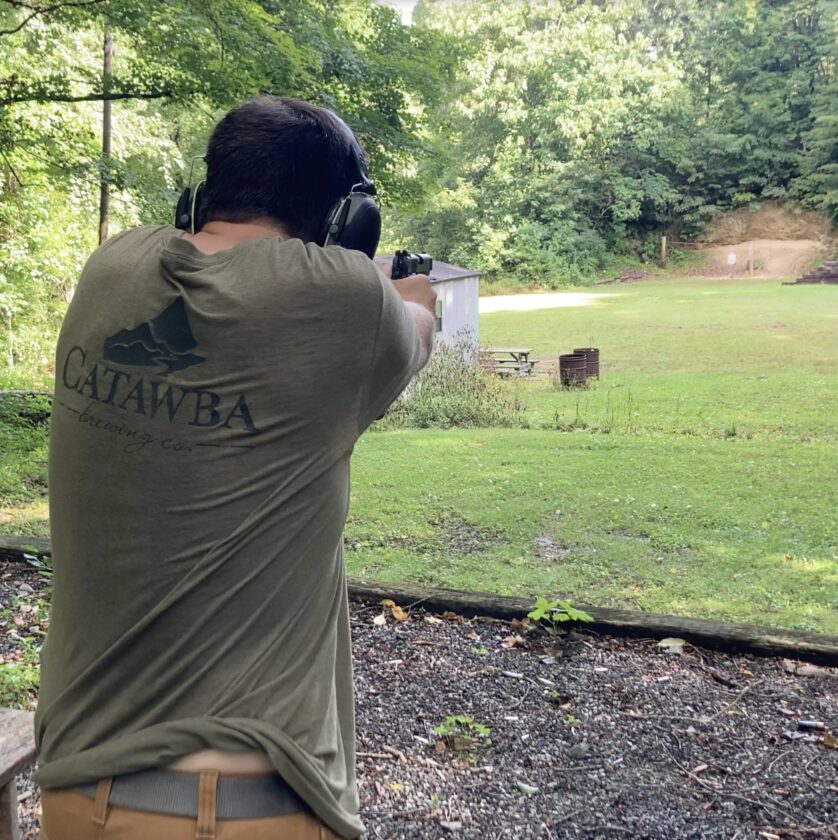 Admittedly it may be hard to find a range that supports long range pistol shooting. Regardless, shoot as far as you can. Most ranges support at least 25 yard. If so, start spending a lot of time way out there at the 25. A couple drills you can shoot at the 25 are the Defoor Performance Hat Qual and my favorite, the 700 Aggregate, aka The Humbler. I hope to have videos of both of these drills soon.

Again, I’m not just bragging about my own ability. I really hope this helps you build or improve your long-distance pistol shooting skills. You aren’t likely to need this skill…but if you can shoot well from far, you can probably do really good close in. 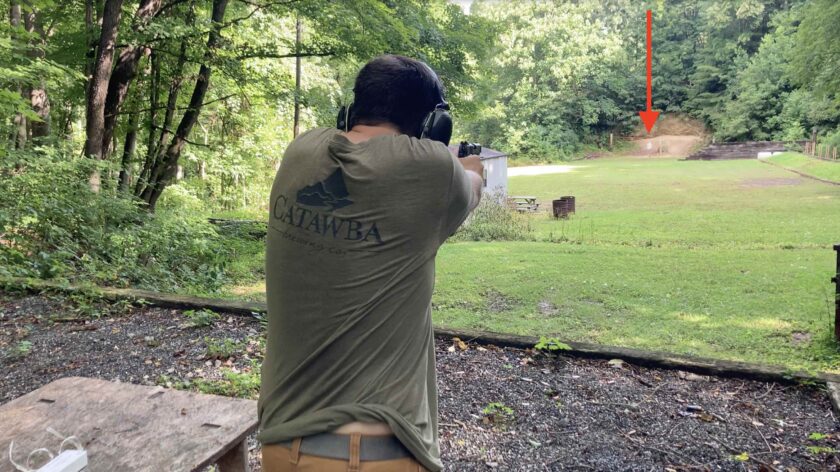