The Holster as Administrative Safety Adjunct

I have written extensively about the benefits of a holster. Since beginning work with the Sig P365XL I’ve discovered another one: a good, high-quality holster is an excellent administrative safety adjunct. Let me explain.

I am a 1911 guy. I am used to multiple, redundant safeties on a pistol. When holstering I am used to disengaging the thumb safety, pulling my palm back to disengage the grip safety, AND controlling the hammer with my thumb. The striker-fired Sig lacks all of these features. I have found that a good holster works well as a reasonable stand-in, though, at least for administrative gun-handling. 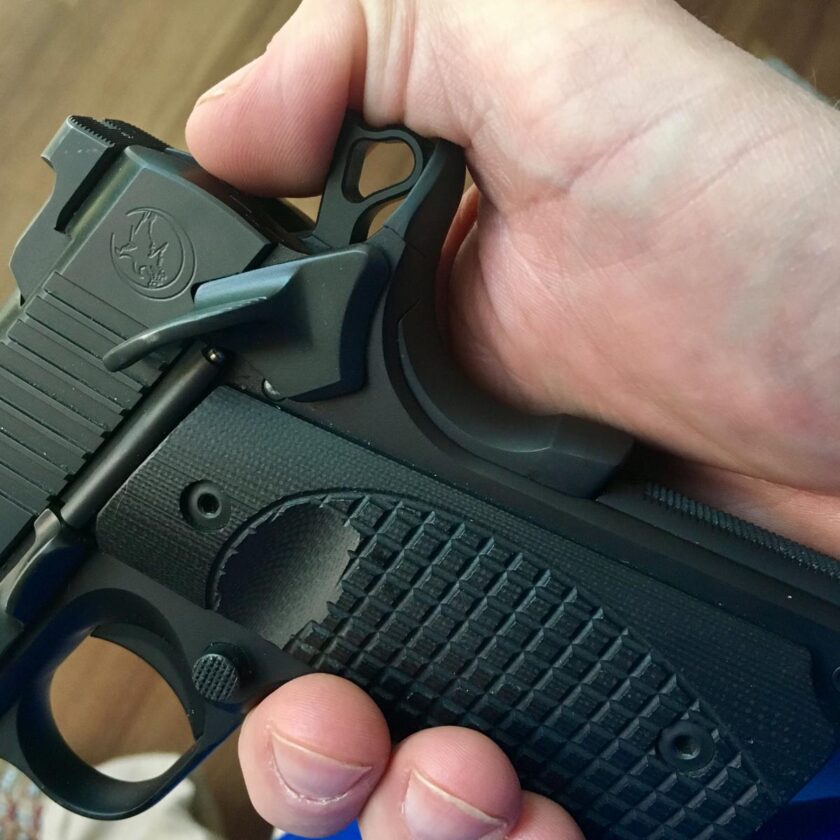 To be clear, this doesn’t negate the need for safe gun-handling. It merely increases my safety margins a bit. I’m not saying you can throw a gun in a holster and have a license to behave irresponsibly.

I fully realize that striker-fired guns do have safety mechanisms. The Glock crowd doesn’t have to point out that, “actually a Glock has three safeties…” I understand that to be the case. I also understand that none of these safeties prevent an object from depressing the trigger rearward, while the 1911’s safeties do prevent exactly such a thing.

It occurred to me recently that a holster actually functions as a pretty good administrative safety adjunct. It protects the gun’s trigger in a number of scenarios.

There are various occasions when I need to remove my pistol for administrative reasons. Instead of un-holstering the gun, I simply remove the whole holster. This ensures that the trigger remains covered, reducing the likelihood I’ll inadvertently pull it. This also means that I put the entire holster back in my waistband. Again, the trigger is covered making it nearly impossible for it to be pulled by a stray piece of clothing. 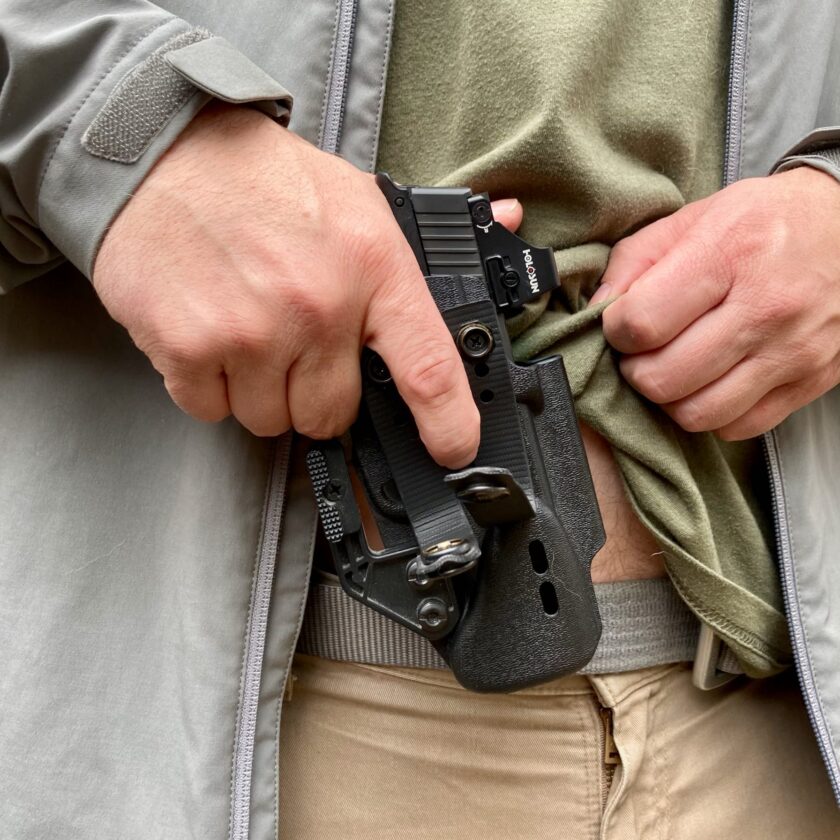 Going to the bathroom for a “sit-down head-call” is an occasion in which I would have un-holstered my 1911, leaving the holster attached to my belt. I was comfortable with the safety considering the 1911s multiple, redundant manual safeties. With the Sig I remove the entire gun/holster unit, and replace it at the end of the bathroom break. 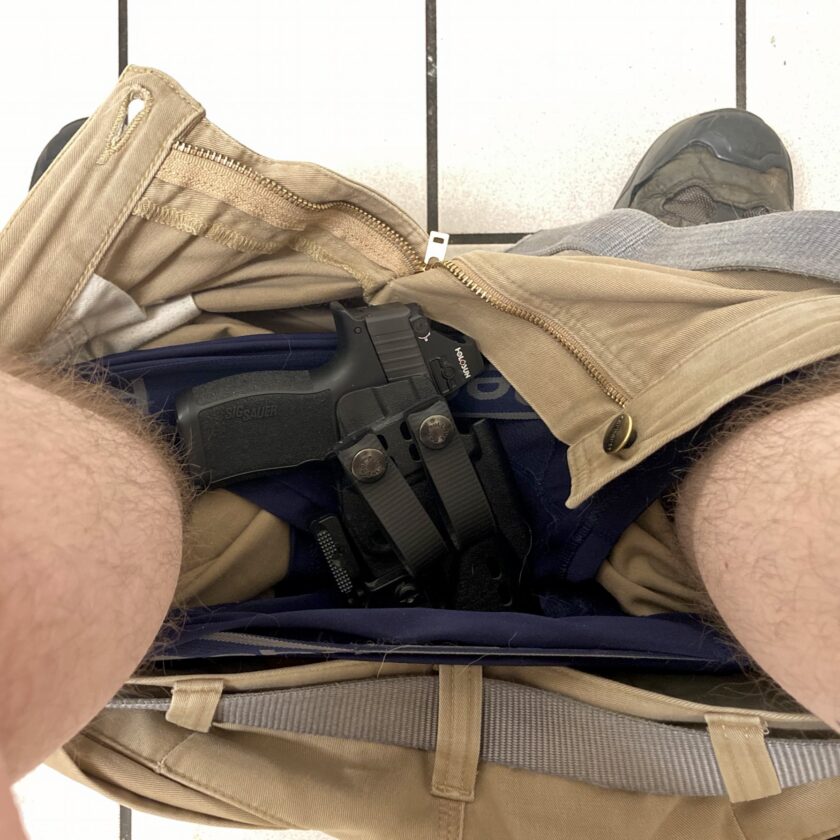 I still have to holster pretty frequently; I do practice regularly, after all. This simply reduces the number of holstering motions I have to make, increasing my safety margin a tiny bit each time. 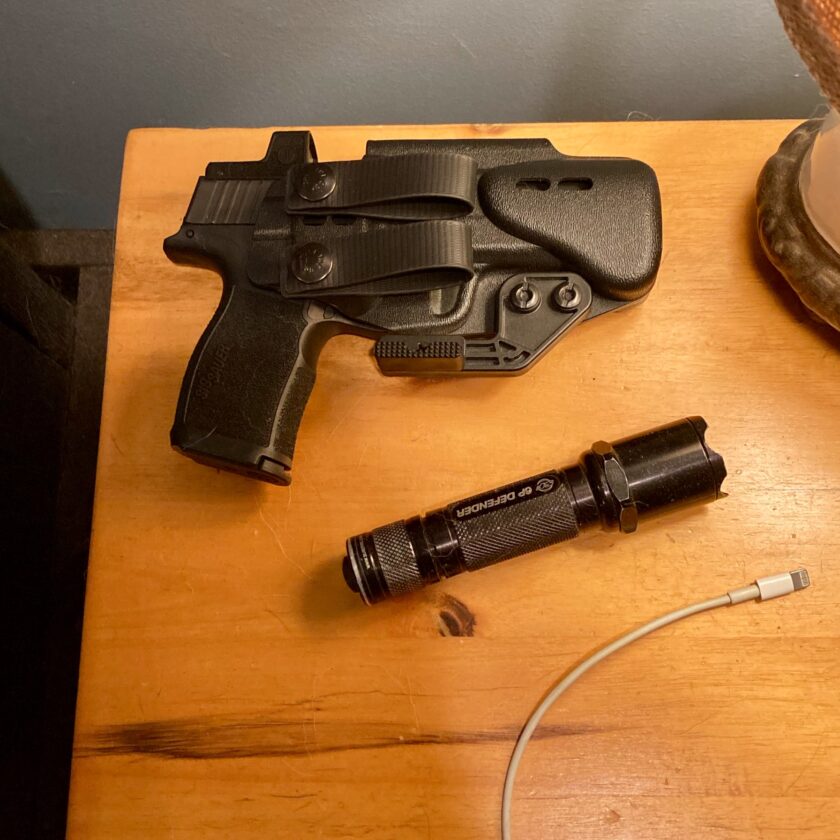 But not the Sig. All it takes is a finger inside the trigger guard to make the gun go “bang.” I could accidentally contact the gun in my sleep if it’s left on the nightstand – not an ideal situation. Also, being awakened abruptly I could grasp the gun incorrectly, depressing the trigger in the process. The most dangerous time for this is in the morning when I’m gathering my things (phone, watch, and pistol) – in the dark my hand could land in the wrong area on the grip causing a negligent discharge.

Even when I store my pistol in the nightstand drawer at night (which I typically do) the holster still provides some additional safety. It prevents my finger from entering the trigger guard when I’m reaching in for the gun. 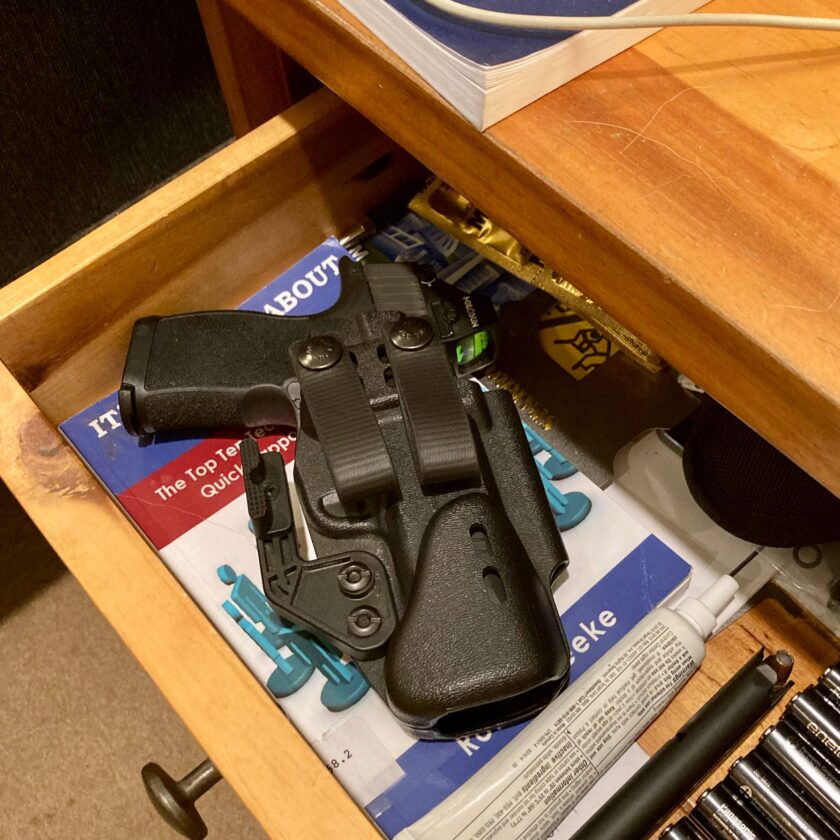 This still permits me to keep a ready gun close at hand. Shucking the holster off the gun would take – at most – a second. If I’ve just woken up in the middle of the night I probably need several times that amount of time just to regain my wits to handle a gun safely, so nothing is lost.

Administrative holstering and overnight “nightstand” storage are the two most common ways in which a holster functions as an administrative safety. I can think of a couple more. These are sort of outlier scenarios – I condone neither “car carry” or off-body carry as carry methodologies. Occasionally, however, you may have to store your gun in a car or bag/pack. Make sure you’re doing so with the gun in a holster.

Your car is not a holster. You should carry the gun on your body when in the car – there are plenty of good reasons for this including accessibility to you, denying accessibility to unauthorized users (like your kids), and making sure the gun doesn’t go flying in an accident.

However, I occasionally have to leave my gun in my car. When I run into the post office, for instance, it is legally prohibited to carry a gun into the building. I can choose to ignore the law at my own legal peril. Another option is to leave my gun at home. This means I’ll be unarmed for the entire trip, an especially distasteful option if the post office is one stop among several errands I’m out running.

A third option is to discretely stow my gun while I run into the post office and re-arm myself at the conclusion of my business. This is the tack I normally take. It’s not ideal. Sometimes, though, you’re in that situation where leaving the gun in the center console for five minutes is the best of a bunch of bad options. Taking the whole gun/holster combo off reduces the odds that I’ll contact the trigger while removing the gun, stowing it, retrieving it, and holstering it.

This isn’t a class on “car carry” but couple quick caveats: don’t leave the gun in the car if there are unauthorized users – i.e. your kids – in the car. Also, make sure you lock your doors. And re-holster the gun as soon as you are back in the car.

Sometimes I also store my gun in a backpack. I’m not going to go into specifics here, but I can’t carry a gun on my body at work. It’s incredibly impractical. Additionally I would lose my job and my credential as a paramedic if I was caught. I do, however, wish to have a firearm closer to me than my house. This lets me put the gun on if I stop for something on the way home. Sometimes this means keeping it in a backpack. 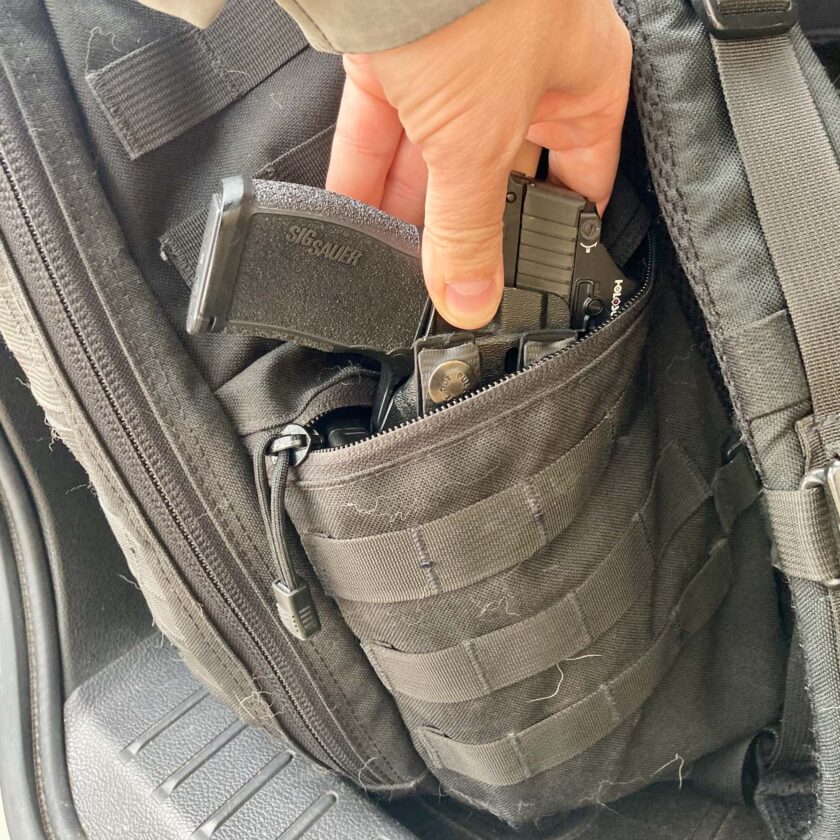 I know quite a few other folks out there carry in backpacks. I’d resist the urge if you have any other option…but I also know that sometimes other options don’t exist. If you do carry in a backpack, purse, or other bag, put the gun in a properly fitting holster, and put it in a pouch or compartment BY ITSELF! This will lessen the likelihood that something will come in contact with the trigger, or otherwise foul the gun. Ideally it should also a compartment where the gun can’t move around much, further lowering the chances of it coming out of the holster.

A high-quality holster comes with a number of amazing benefits. It holds the gun securely and presents it consistently. A good holster helps conceal the gun, protects it from gun-grab attempts, and makes the gun comfortable to carry. Importantly, a good holster also protects the gun’s trigger, both when the gun is on your body and when it’s not.

To reiterate, this article isn’t condoning car carry or off-body carry. There are times when some sub-optimal storage situation might be required. If you have to use one of these methods, make sure the gun is in a correctly-fitting holster that protects the trigger. 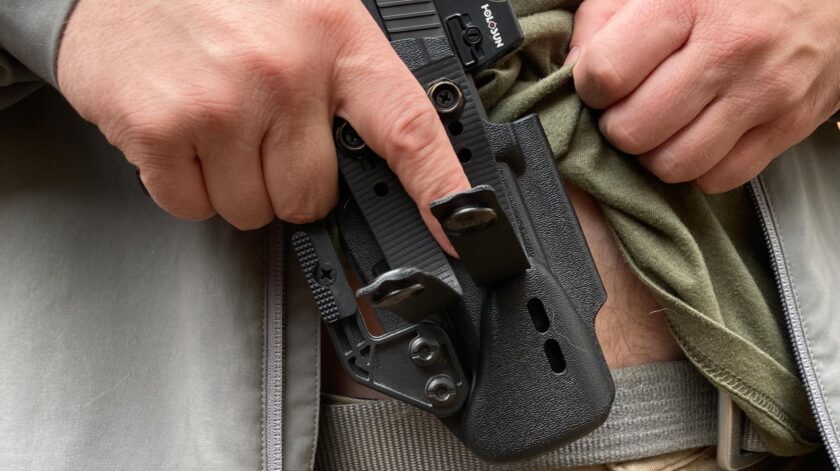