I have recently been down a rabbit hole of reading survival-related books. The wilderness survival class I taught a couple weeks ago prompted this reading track and I’m so glad it did. It got me back into a couple books that I have long loved, and introduced me to a few new ones. Here are my favorite wilderness survival books.

The books in this article cover several elements of survival. First, I offer you a book on survival mindset; it is also one of my favorite books, period. Next, there is a modern how-to manual which I judge to be extremely reliable. There is a tale of surviving a nearly unimaginable event and the limits to which human endurance can be pushed. And finally there is a “bad example” book…you’ll understand when you get there. I hope you get something out of it!

Deep Survival: Who Lives, Who Dies, and Why by Laurence Gonzales. Deep Survival is one of my bar-none favorite books on survival. Gonzales goes over a number of stories, what went wrong, and what went right. The lessons are absolutely fascinating, like how experience can work against us sometimes. If our only experience of a sport is a positive one we can build a mental model of that activity that doesn’t include the possibility for disaster.

For example, if every hike you go on ends successfully – with a happy tiredness, a drive home, a cold beer and a hot shower – you have no reference for negative outcomes. Your brain tends to overlook the bad because it’s never happened before. That’s how climbers can make bad decisions like tying to each other with no static anchor (what one ranger calls a “suicide pact”), and how all of us can ignore signs that should make us pack it in for the day.

Gonzales also talks quite a bit about how things go right, and how to optimize your chances of things going right. His “rules for adventure” are a great example of steps you can take to increase your survivability. They are:

Deep Survival is MUST READ material for anyone interested in surviving any sort of adverse event from plane crash to gunfight to being lost in the woods.

As a huge fan of the genre from childhood, I have consumed a number of “how-to” books on survival. Some of the recent works are much better than older volumes. We’ve come a long way in the technology to support survival, and the science of survival has come a long way. I have two books that are my absolute favorites. I’ll save one for the next installment. Today I want to recommend:

98.6: The Art of Keeping Your Ass Alive by Cody Lundin. I’m not going to lie: I was kind of turned off by the title and the cover. And if that weren’t enough, I don’t like the graphic-novel style illustrations inside. If you like it I’m not mad at you – it’s just not my cup of tea. I decided to give this book a try, though, and I am so glad I did. The information was captured by a man who knows a LOT about survival and is solid gold. 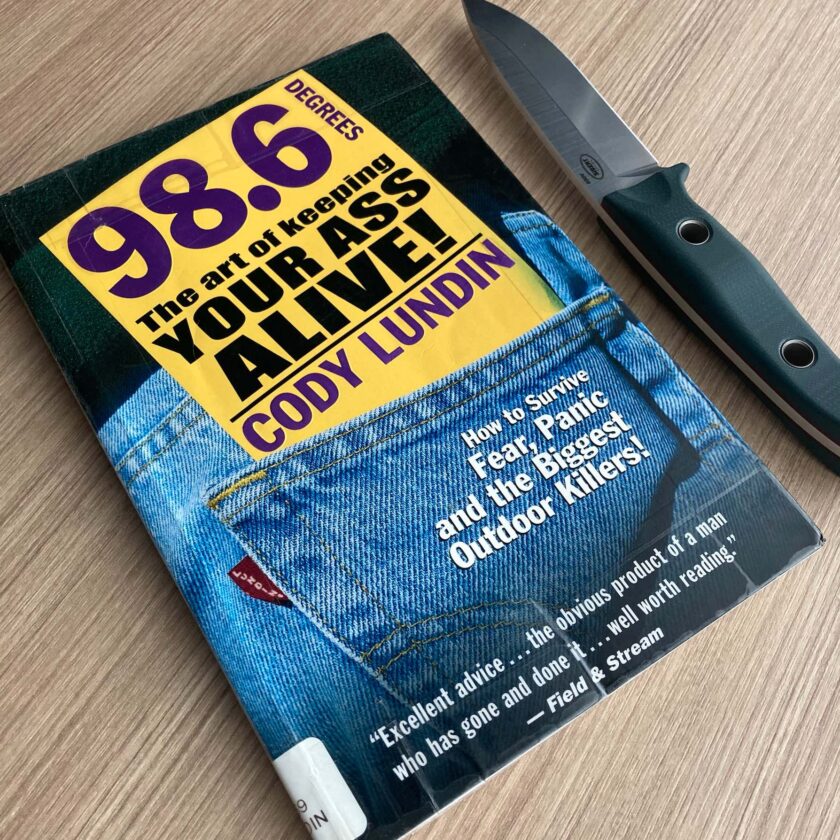 As the title would suggest, 98.6 focuses mainly thermoregulation. If you really stop and think about it, a lot of your survival priorities deal with maintaining 98.6: fire, shelter, and water are all to keep your body at a survivable temperature. This books focuses on simple, reliable skills rather than sexy, cool-guy stuff like solar stills (the construction of which probably expends more water than it produces).

Though the tone of this book is somewhat lighthearted, it is completely realistic about the difficulty of wilderness survival. If you only have one book on wilderness survival, this one would get my vote. Though I judged this book by it’s cover I’m glad I gave it’s content a chance; 98.6 Degrees: The Art of Keeping Your Ass Alive is full of high-quality survival information.

Between a Rock and a Hard Place by Aron Ralston. If you’re looking for a harrowing story of survival against all odds you’d be hard pressed to find a better text on the subject than Between a Rock and a Hard Place. Aaron Ralston is an avid and very serious outdoorsman. He was canyoneering in a very narrow canyon in Utah when a rock fell and pinned his arm. The rock was too heavy to move and Aron was forced to make a very difficult decision: he ultimately amputated his own arm.

Between a Rock and a Hard Place details Aron’s most well-known experience, but also catalogs plenty other adventures. The titular episode wasn’t Aron’s first brush with death, and chapters alternate back and forth from Aron’s “present” predicament and previous outdoor achievements. Aron had almost drowned in the Colorado River, been stalked by a bear as he post-holed through hip-deep snow, and bagged Colorado’s “Fourteeners” in winter.

It doesn’t have to be fun to be fun.
– Mark Twight, American Alpinist quoted in Between a Rock and a Hard Place

I’m not going to give too much more away about the book, but I will say this: reading it right after Deep Survival was instructive. First, Aron’s lack of preparedness stood out starkly. He didn’t let anyone know where he was and he had very, very minimal equipment with him. What shown through even more brightly – at least to me – was the traits Gonzales identified as common to survivors. Two immediately come to mind: Aron never lost his sense of humor, and he was still able to appreciate the beauty of his surroudings.

Between a Rock and a Hard Place is a look at situation few of us can even imagine. It provides deep insight into the mind of a survivor and the torment that surviving can mean. Though not a story of “traditional” wilderness survival it is certainly worth your time.

When I worked as a paramilitary contractor I had a buddy with loads of great one-liners and quips. One his best was, “at least you aren’t completely useless. You can still serve as a bad example†.” Bradford Angier’s How to Stay Alive in the Woods is a good example of a bad example. I have no doubt that Mr. Angier is an experienced outdoorsman, and most of the information contained in the book is factual and accurate, but I have two problems with it.

I do not, for a minute, suppose my ways are the best ways, but at least it may be helpful to know the other fellow’s points.
~ Col. Townsend Whelen, quoted in How to Stay Alive in the Woods

First is the attitude that wilderness survival is as easy as choosing to “live off the country.” The full subtitle reads, “A complete guide to food, shelter, water, and self-preservation that makes starvation in the wilderness nearly impossible” [emphasis added]. I feel like that was the attitude I had as  a teenager – wilderness survival, or “living off the land” would be an adventure, possibly even preferable to living among the trappings of civilization. Today I’ll feast on trout and blueberries and rose-hip tea; tomorrow I’ll fill my belly with a snared rabbit or handily-felled grouse (stewed with wild onions, of course), steep some spruce needles, and a have a hatful of raspberries for dessert. How to Stay Alive reflects this boyish sense of adventure and lack of seriousness with chapter titles like, “Every Necessity is Free” and “No Dishes to Wash.” Bully!

Reality is a bit different. Sustaining oneself with what one forages is very, very difficult. One of my favorite survival shows, Alone, is a vivid example of this. Seasoned survival practitioners who go unaided (but with considerable equipment) into the wild. All go hungry and lose tens of pounds. Some have to be forced to withdraw to avoid permanent bodily harm from starvation. Very few are worried about foraging seasonings for their stews.

My second problem with the book is is Mr. Angier’s survival priorities, or lack thereof. Couched only implicitly as a priority by its positioning in the book, the first section immediately dives into food collection and continues this way for eight chapters, only finally getting around to covering water on page 89.

Why do I point this out? I don’t mean to criticize this book simply for the sake of criticizing something. I think Mr. Angier meant well in writing How to Stay Alive, and I think it reflects the times a bit, too. It’s beautifully written but dangerously cavalier. If you go into a survival situation believing, “wild food is free for the taking, fire for the lighting, clothes for the making, and shelter for the satisfaction of building” you probably aren’t mentally prepared for harsh realities of survival.

A “Part II” is definitely coming. There are plenty more books I want to include, and some I haven’t read yet, but I didn’t want to delay publication on this any longer. Stay tuned! 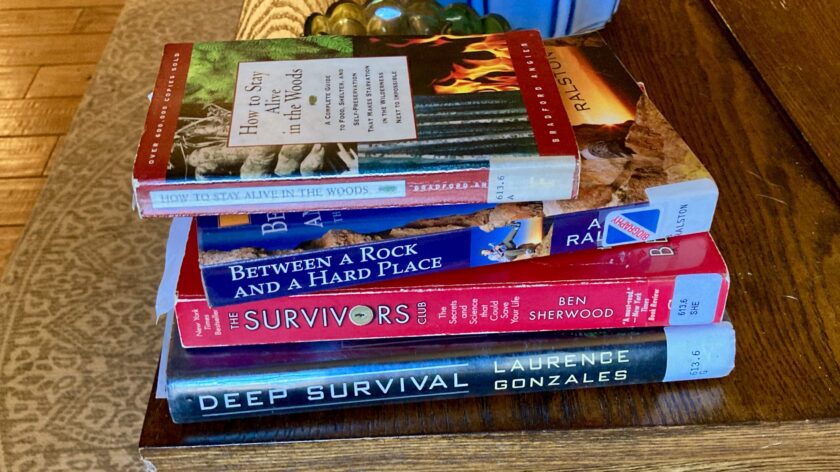 †Another was in response to our team leader, during an especially bumpy helicopter flight saying, “at least you’re here. I won’t die alone.” The response: “Everyone dies alone.”