A few weeks ago I wrote an article discussing the nomenclature of a key. Today I am going to discuss some basic lock nomenclature, and look at various lock form-factors. In future posts discussing protection measures for your locks (and possibly some defeats) it is important to have a reference for various nomenclatures used.

Let’s begin with the basic pin-tumbler mechanism. This is by far the most common lock mechanism in the world. For those of you who are unfamiliar with how this mechanism works, here is a quick overview. The pin-tumbler lock is so named for the pins that keep the cylinder plug from turning unless the correct key is inserted.

The image below depicts a locked pin tumbler lock with no key inserted. The blue pins are called top pins or driver pins. The red pins are called bottom pins or key pins. A combination of one spring and its corresponding top and bottom pin is called a pin stack. This lock has five pin stacks.

The image below depicts a lock with the correct key inserted. Note that all of the red pins are lifted to the correct height to allow the cylinder to turn freely. When the pins are raised to the correct height they are said to create a shear line, a negative space where nothing is blocking the cylinder from turning. A couple more bits of nomenclature: in this image the blue top pins are now in a portion of the lock called the bible. The bible is where the top pins and springs are retained with the correct key is inserted.

Below is a pin tumbler lock with the incorrect key inserted. Note that some cuts are too deep, allowing the blue top pins to drop too far, blocking the shear line. Some cuts are too shallow, forcing the red bottom pins up into the bible and again, blocking the shear line. This is what makes your key’s bitting operate your lock, but not your neighbors’.

Let’s introduce a couple new pieces of terminology here. The yellow portion of the lock containing the key and most of the bottom pins is called the cylinder plug. As illustrated in the previous photo, this is what turns to open the lock. The back of the cylinder plug is typically affixed to something that operates a deadbolt or other locking device, like a tailpiece or cam.

Now let’s look at some actual door hardware. The image below depicts a lock cylinder. Note the upper pin chambers in the cylinder shell, which make up the bible. There is a corresponding lower pin chamber in the cylinder plug. They are not visible in the photo below because of the angle of this photo. 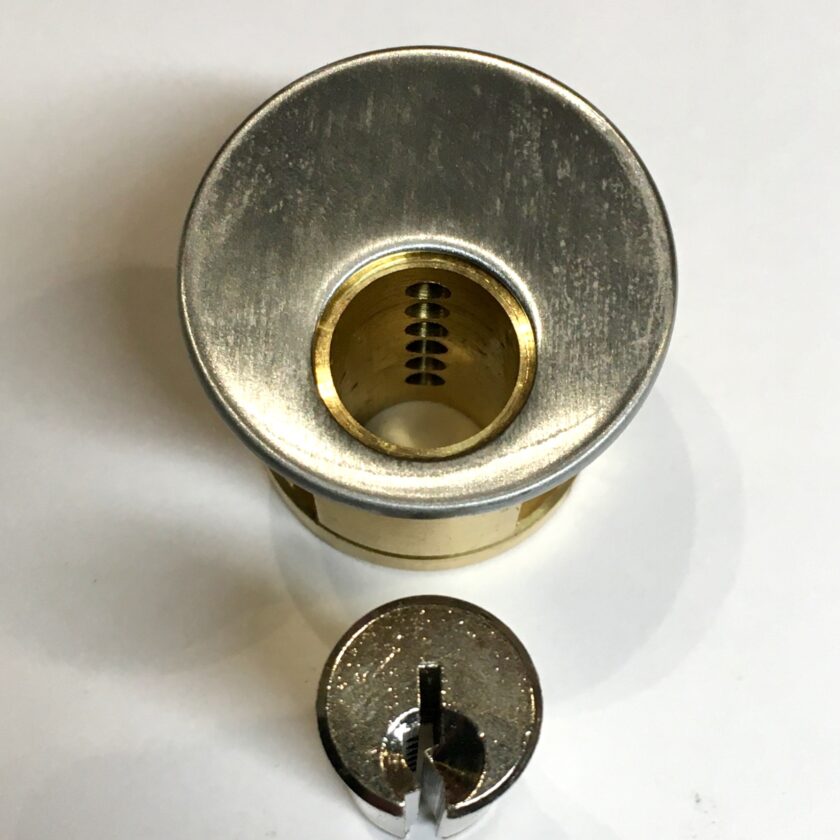 As we go through the following door hardware, keep in mind that the basic pin-tumbler mechanism described above remains consistent throughout. It is really important to be able to identify the underlying mechanism in spite of varying form factors.

This is a key-in-knob (KIK) cylinder, sometimes pronounced by locksmiths as a “kick,” for what are probably pretty obvious reasons. Key-in-knob cylinders contain the same pin-tumbler mechanism we saw in the illustrations above. The rectangular top portion is the bible and the rounded lower portion houses the cylinder. KIKs are found in door knobs, levers, and just as often as not, deadbolts. A very small handful of padlocks also accept KIKs to allow them to be compatible with one’s door locks. 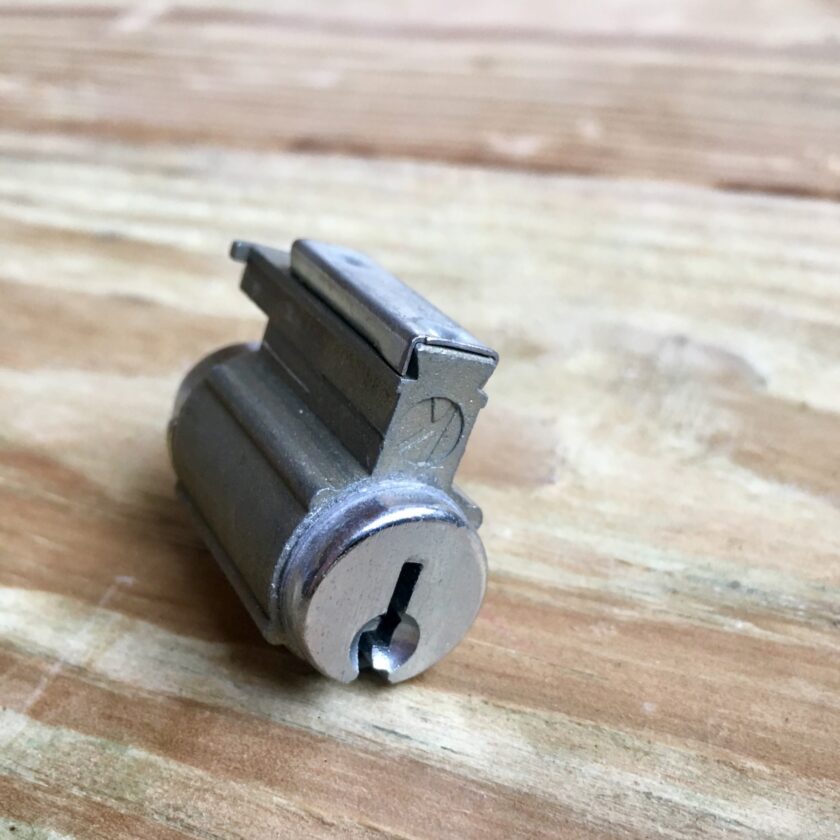 If you look carefully below you can see that the deadbolt in the photo has a KIK inside it. 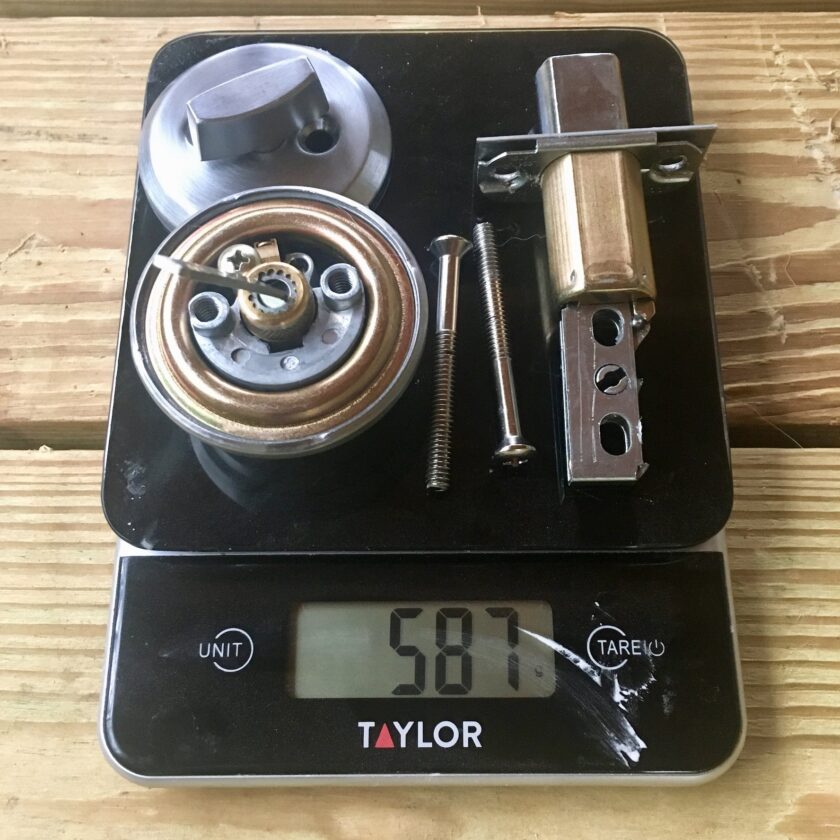 Below is a deadbolt cylinder. This is very similar to a key-in-knob cylinder as it contains the pin stacks, bible, and cylinder, but has a bit more material. These are commonly encountered in deadbolts instead of KIKs but functionally serve the same purpose. Note the flat metal piece protruding from the rear (visible in the background). This is called the tailpiece and is the part that actually interacts with the deadbolt to extend or retract it. 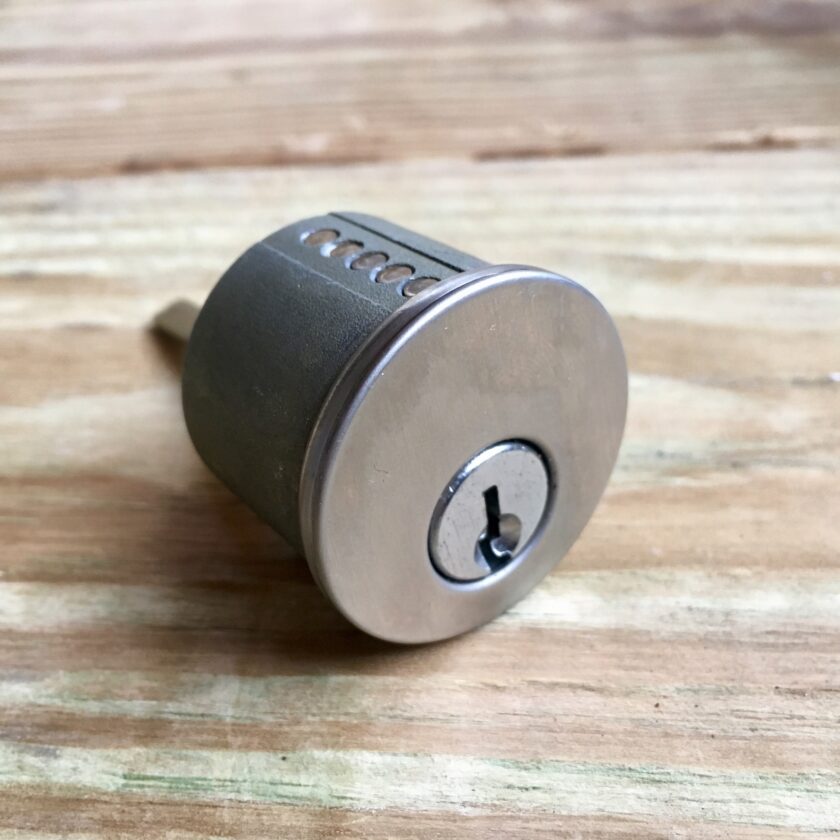 The lock below is a mortise cylinder. This fact is evident by the threats on the body of the lock. This cylinder is literally designed to be screwed into a lock that is mortised into the edge of the door. 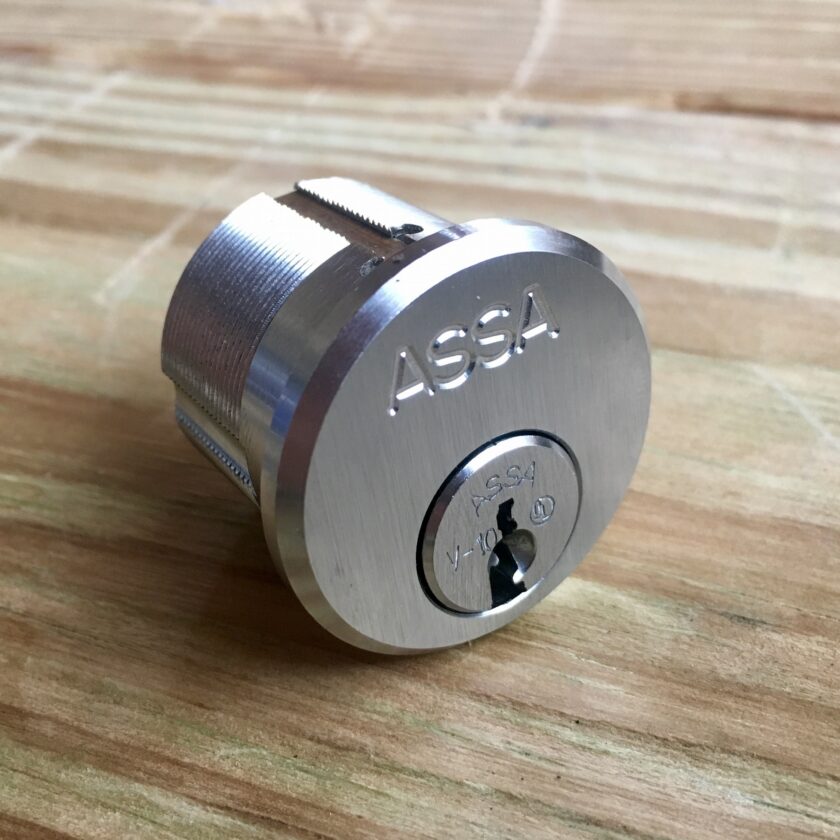 You will also encounter mortise cylinders on “narrow stile aluminum/glass” doors. These are the glass exterior doors we are all used to seeing at almost any commercial building. 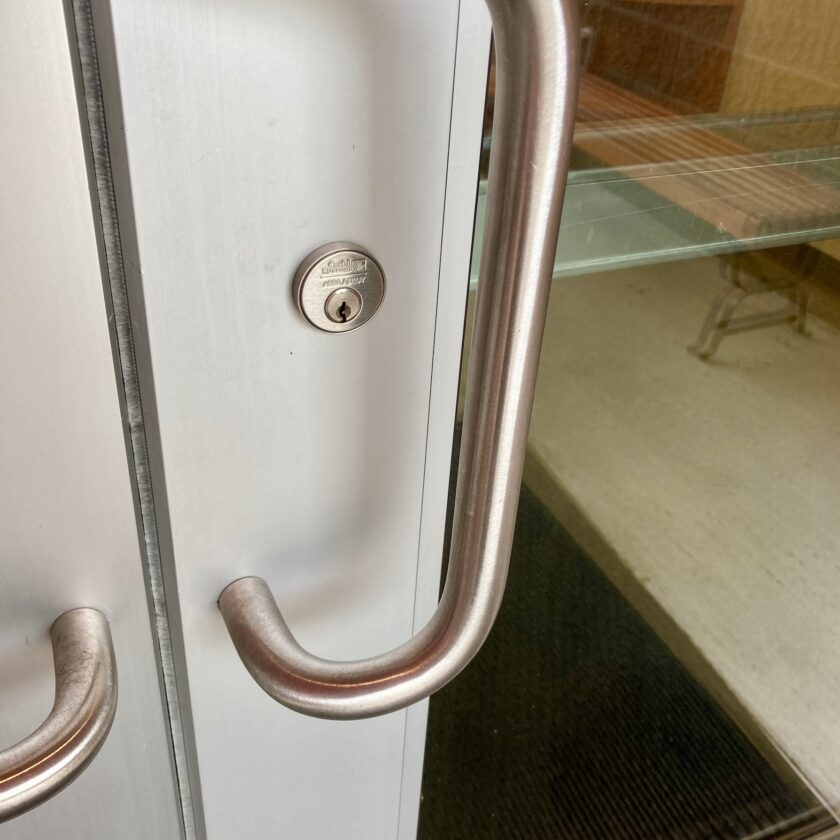 If you ever visit a large institution like hospital, school or college, or government office building you are almost guaranteed to see mortise locks on heavy, wooden doors.

Below you can see the back of a mortise cylinder lock along with several cams. These cams are interchangeable to work with various manufacturers’ locks. This article does a good job of showing how these cams interact with the latch mechanism. The “blank” cam currently installed on the lock is non-functional and was just put on there by me to allow me to use the lock for training and demonstration purposes. Also note the screw holes on the back of this cylinder. As with most very high-end locks, this one can also be used as a rim cylinder (see below). 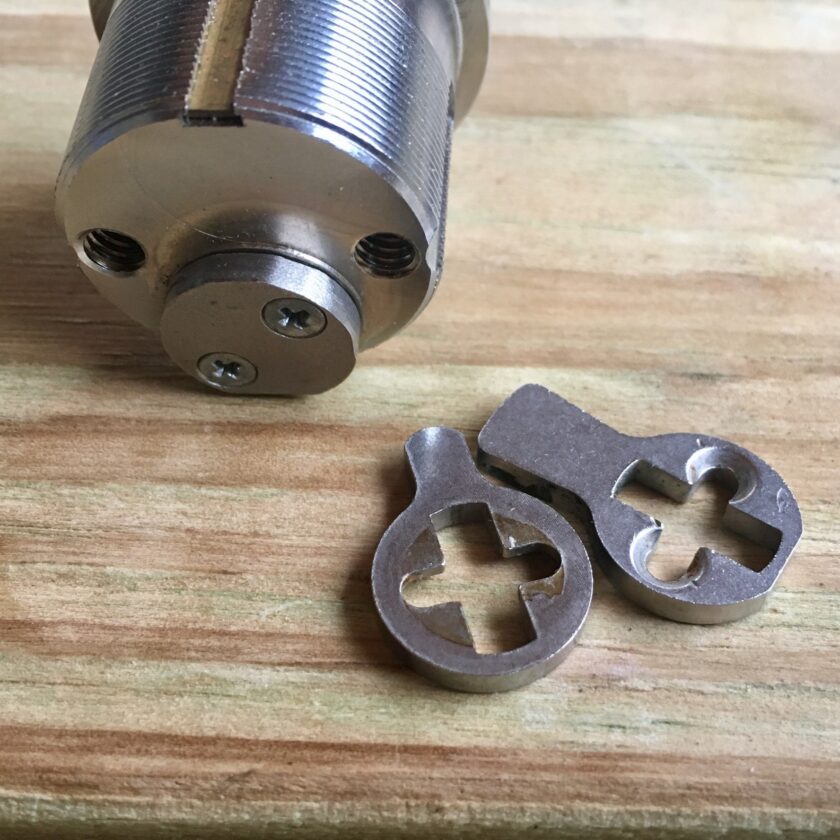 The rim cylinder is fairly popular for residential applications. They are used for night latches (auxiliary door locks, see photo below), garage door locks, and, in commercial settings, for exit devices like crash bars. The rim cylinder is mounted to the rim (the edge) of a door by drilling a hole through it, inserting the lock cylinder, and securing it from the back with a mounting plate and screws. 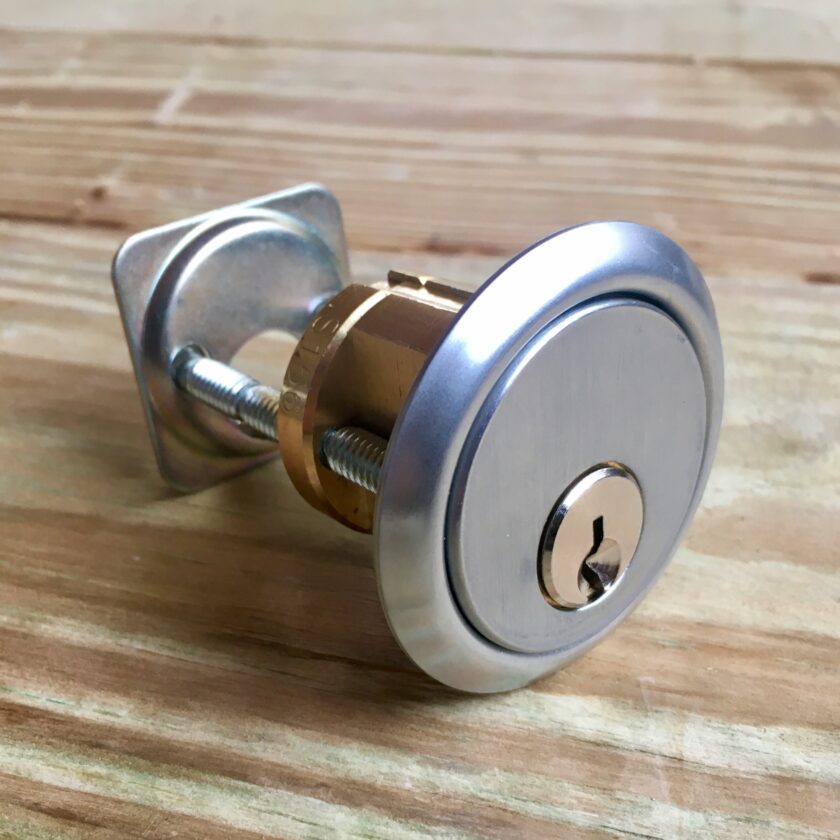 The photo below depicts an installed rim cylinder from the exterior of the door. The lock cylinder sits fairly flat against the door. 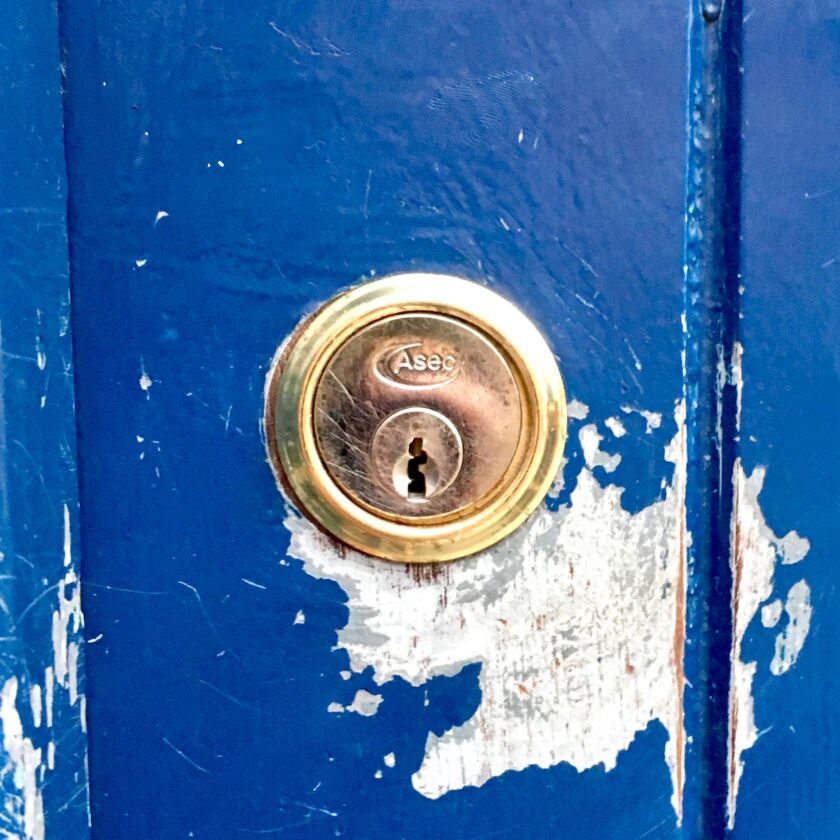 A tailpiece protrudes through the mounting plate and interacts with the latching mechanism. As you can see, the cylinder plug is directly linked to the tailpiece, meaning when you turn your key, you turn the tailpiece, which opens the lock. 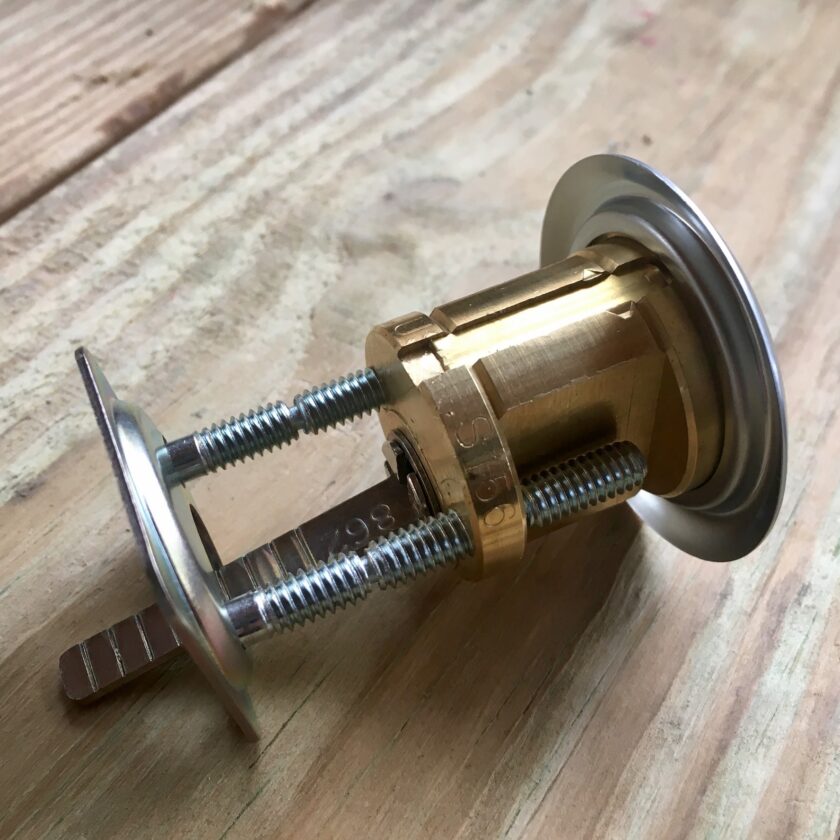 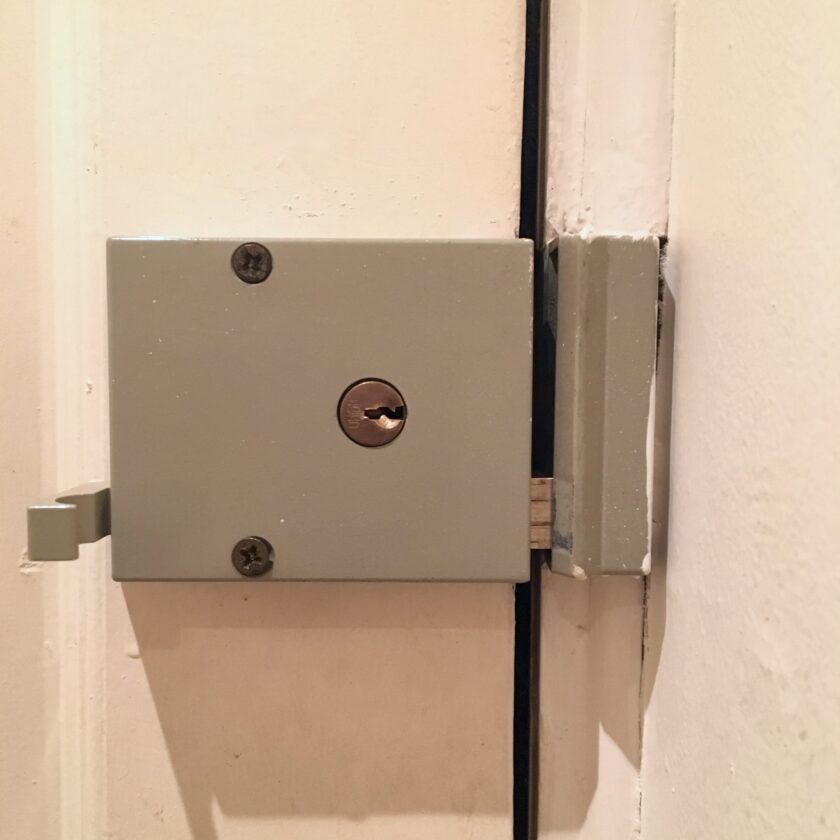 Below is another, classic night latch example. These were found in NYC in a coffee shop bathroom and this photo is borrowed from Lock Safari: NYC. Note how they attach to the surface (rim) of the door. 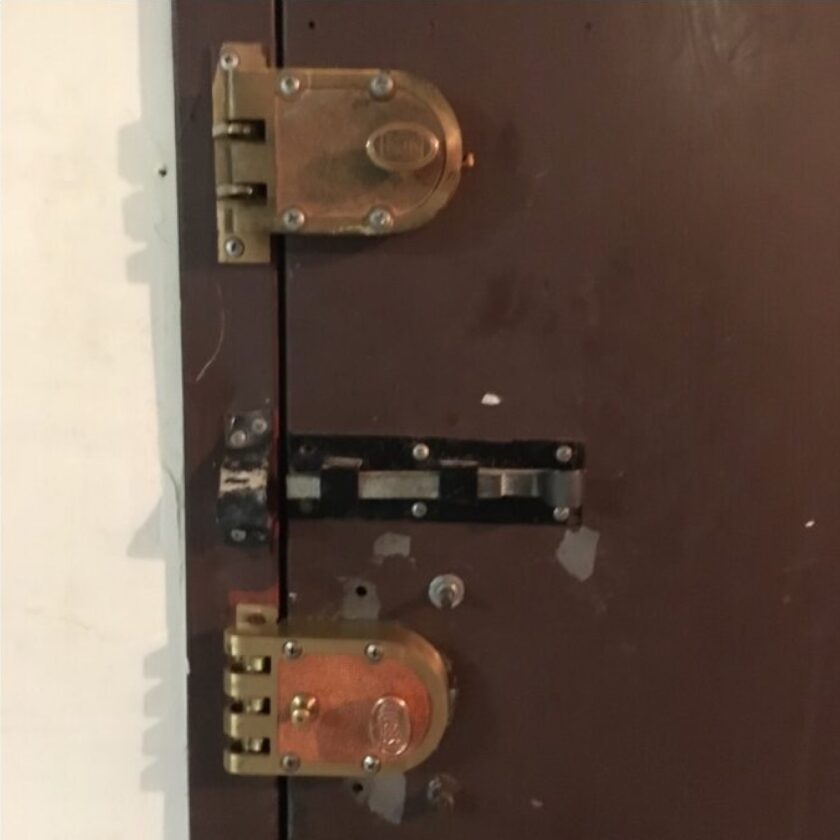 Key-in-knob cylinders, mortise cylinders, and rim cyinders are extremely popular in North America. The same cannot be said for the rest of the world. In much of the world the Euro Profile lock is dominant. The photo below depicts a Euro profile on the right and a Euro oval on the left. 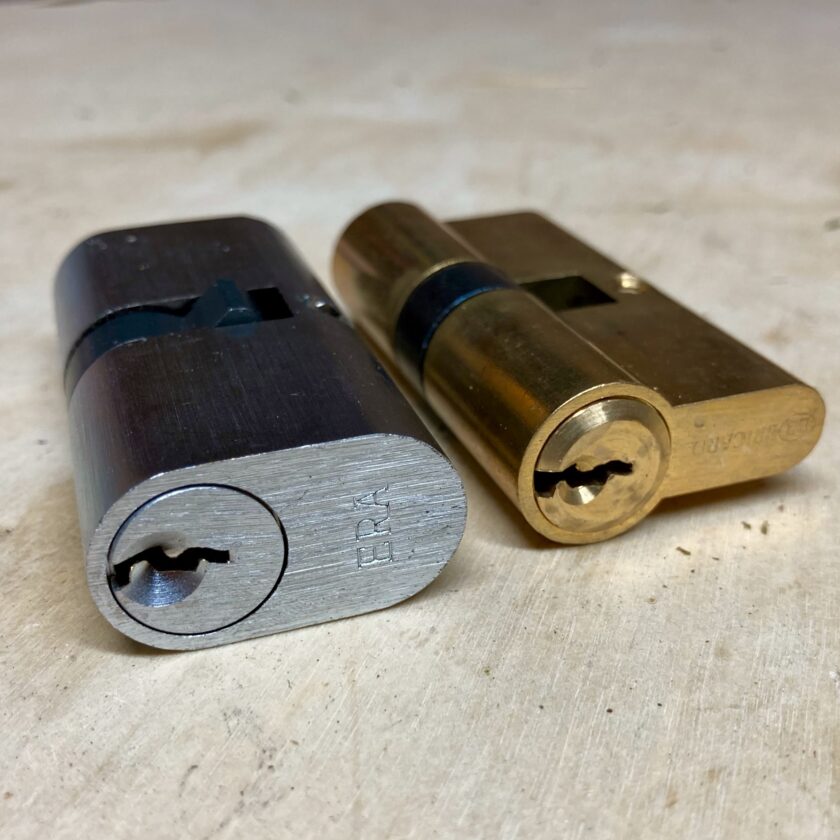 The door below has both a Euro profile (top) and a Euro oval installed. The Euro oval is generally more robust and considered to be more secure against forced entry. Note how far the Euro profile protrudes from the rim of the door; this makes it vulnerable to tools that can break it. 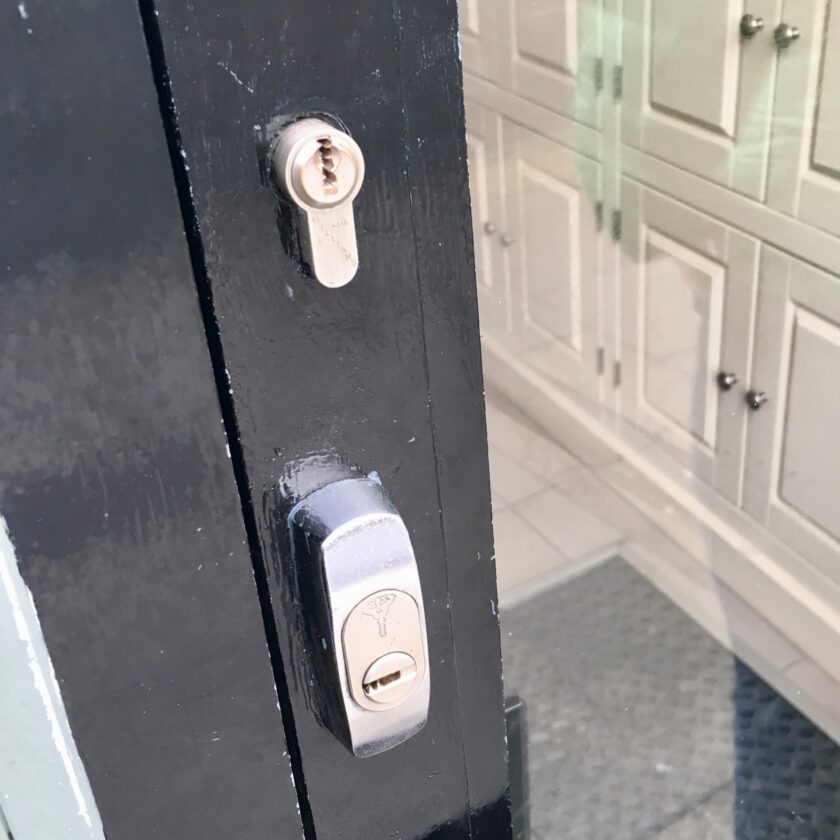 OK, this one is just for fun, and an oddball of the lock world: the mogul cylinder. A mogul cylinder is simply a vastly outsized mortise cylinder used for high security applications. Mostly they are used in the detention world (i.e. jails). The photo below depicts a mogul cylinder from my lock library, alongside a standard-sized rim cylinder. 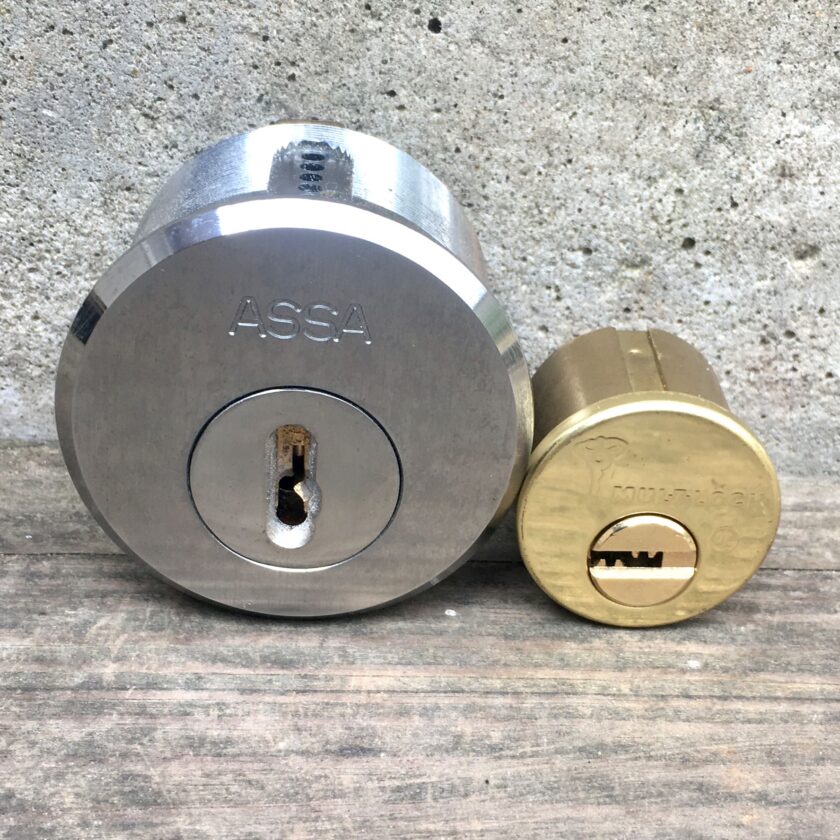 All of the components inside the lock (pins, springs, etc.) are standard size – just the exterior is oversized. Note that this is a high-security ASSA lock. Also note the HUGE, free-spinning, anti-drill plate in from of the actual lock cylinder. This is a very interesting lock and again – a true oddball in my library.

Stay tuned. I know this isn’t the most exciting material, but I promise it is going somewhere. If you are truly interested in lock defeat and in improving your own security, an understanding of how locks work (and what things are called) is imperative. I’ll be back soon with more interesting stuff.