A Brief Introduction to Rechargeable Batteries

I decided to adopt rechargeable AA batteries only recently. I admit that I’ve always having sort of a bias against rechargeables. After having worked with them for a few months I’ve gained a whole new perspective and confidence and in them. Let’s talk about why.

I was skeptical about rechargeable batteries because…well, I don’t actually remember why. I’ve always had this notion that they aren’t “as good” as non-rechargeable batteries. But I noticed a few things. First, I thought about my iPhone. I’ve had my iPhone for over four years. Despite getting drained and charged a minimum of almost 1,500 times (that’s once a day for four years, and an estimate that errs strongly on the low side), the battery still works just fine. Battery technology really has come a long way in the last decade.

As another anecdotal example, I noticed a friend’s vaping apparatus as he changed the batteries one day. Immediately I realized his batteries are 14500s – a rechargeable AA that runs on a higher voltage (thank you to the individual who corrected me on that). A lot of the flashlights I reviewed last year will run on AAs or 14500s, with 14500s offering much brighter outputs. I asked him how long his batteries last before no longer accepting a charge. He has been vaping for two years on the same two batteries and trust me – they get a workout.

Finally, in 2019 I got really serious about selecting an EDC flashlight and began my search in earnest. I began scouring the internet for everything I could learn about compact flashlights. One thing I began to realize is that a ton of reviewers on YouTube reviewing flashlights used rechargeable batteries. Most of these guys are way, way more in the weeds than I am. If the experts are all using and recommending rechargeables, that’s probably a clue.

So, I went out and ordered a simple set of Eneloop Pro batteries and a charger. They have completely changed my outlook on the purchase, use, and storage of batteries. I’m going to give you my best arguments for at least checking out rechargeable batteries. But first I’m going to talk quickly about Eneloop batteries. Eneloop batteries are widely regarded as some of the best rechargeable AA batteries available. They also make AAAs, and the charger I have will charge either AA or AAA. This article will focus on the AA version.

Lithium batteries are outstanding. They outperform alkalines in almost every meaningful way. I still use a number of lithium batteries and I will talk about that more at the end of the article. Lithium batteries hold more power, provide a near-constant output until they are dead. Importantly, they don’t leak.

Rechargeable Ni-MH batteries offer of the benefits of a lithium battery but you don’t have to throw them away after you use them. Batteries from Eneloop are some of the most highly recommended rechargeables on the market. The Eneloop comes in two versions: the standard Eneloop (with white wrapper) and Eneloop Pro (with black wrapper). The standard eneloops offer more charges (up to 2,100 vs 500) while the Eneloop Pros offer greater capacity (2,550 mAH vs 2,000). 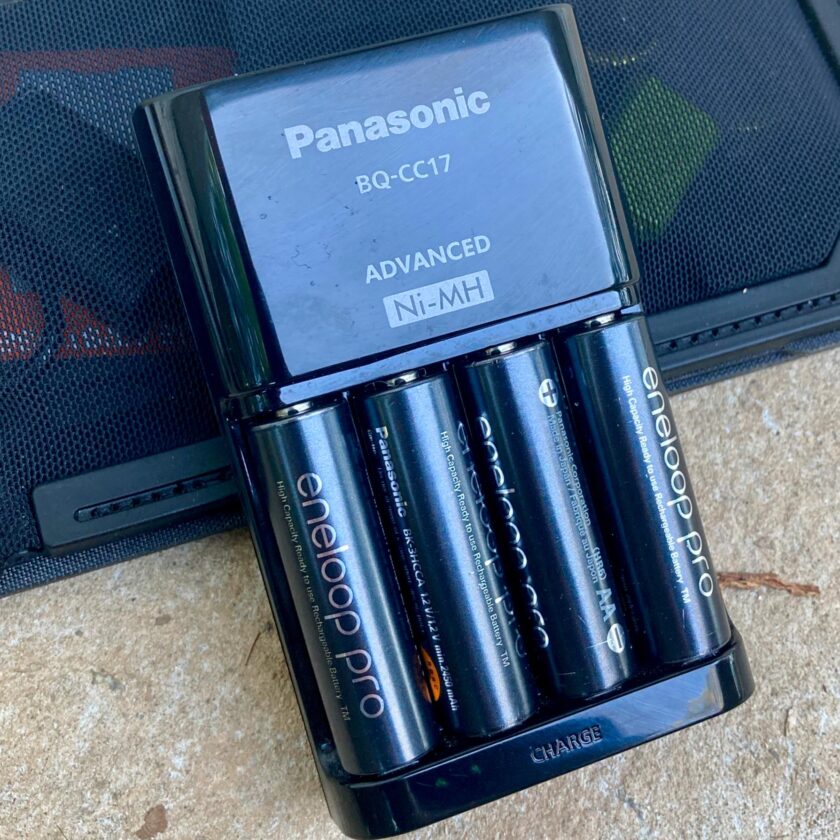 Let’s look at the best reasons I can offer you for considering some rechargeable batteries.

In the self-defense community there is a strong contingent of people with “precious” gear. These are guys – and I used to be one of them – who carry knives day-in and day-out, but never use them. Why? Because they are saving their blade for some emergency. Their knife is too precious to actually be used. I also know guys who carry flashlights that can’t be used because – again, you guessed it – it’s being “saved” for some undefined emergency.

Even though I have subscribed to this philosophy in the past, I never liked it. It’s inelegant to carry a tool that you can’t (or more accurately, won’t) use. There is a cost for carrying that tool, so you should at least get the benefit out of it, as well. I like to actually use my equipment. Why? I do understand where those guys are coming from, though. You’d hate to pull out your light in a dark alley, only to find you’d used the last bit of battery looking under the couch for your keys. 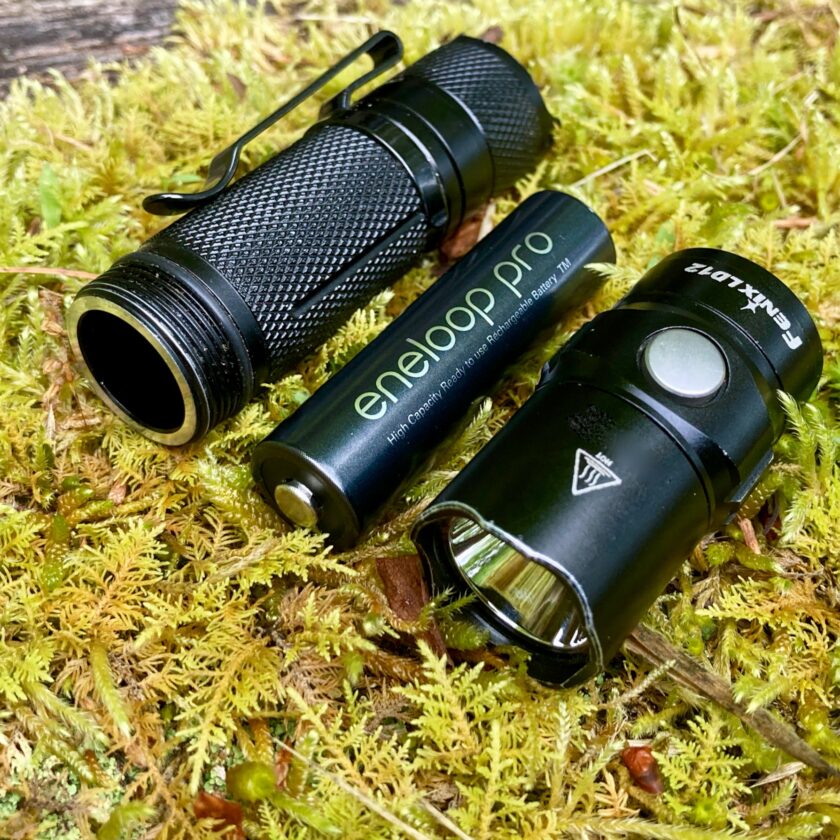 The alternative to this is swapping out your battery much more frequently than is actually necessary. I’ve also been this dude – they guy that loaded a brand-new lithium battery into his light based on really vague decisions. “Well, I feel like I might have used my light a lot this month…” What I really ended up doing was throwing out a lot of batteries that probably had a lot of life left in them.

Now I use my light all I want. Earlier this year I spent two weeks dry practicing with my light. I used my EDC light, and I practiced in the dark. That’s ten minutes of light use times fourteen days, divided by zero worries of having a dead battery when I walked out the door. Why? Because every Sunday I put a brand-new battery in my flashlight. Every Monday morning I start the week knowing I have a battery that will easily last all week. And if I have a really, really long day of flashligh use for some reason? I just grab a fresh battery and throw that on the charger – too easy.

This is a huge benefit of rechargeable batteries. If you are stockpiling batteries, you are limited to the exact number of batteries that you own. That’s not the worst thing, but your supply is absolutely finite, unless you have spent thousands of dollars on batteries. With an investment of a couple hundred bucks in rechargeable batteries and a way to charge them via solar you can stretch your battery usage much, much further. 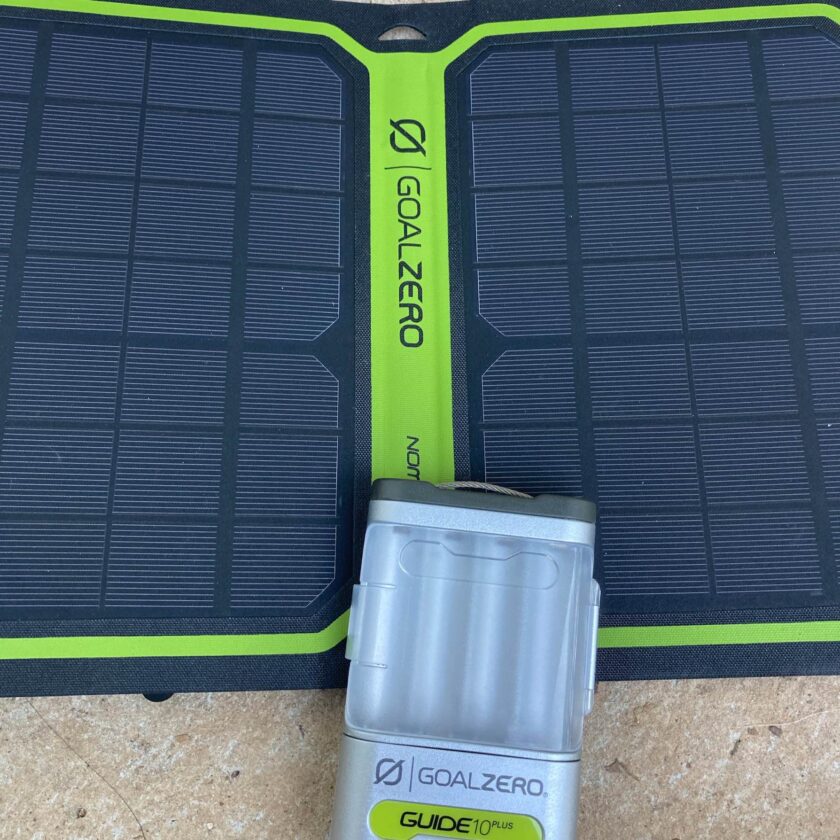 We used an REI dividend to order a GoalZero Nomad 7 solar panel and AA charger. Under current conditions I use exactly three batteries per week: two in my toothbrush, one in my flashlight. During emergency conditions I would drop the toothbrush for a conventional model, but we would power other lights with batteries, so overall consumption would probably go up somewhat. But we should easily be able to charge 8-12 batteries per week based on my early tests. Obviously we would do everything possible to reduce demand on batteries, like using oil lamps where safe. We are also in the early planning stages of a much larger solar system.

I hate to be the recycling-police, but I loathe throwing batteries away. Especially where I live, where I know all those heavy metals are going – albeit indirectly and roundabout – into the water I drink. I know some of you are rolling your eyes right now and that’s cool. Even if you don’t care about that, care about this: in a grid down, you are your own garbage collector and trash dump. I absolutely, 100% do not want to dispose of batteries on my own property, nor do I want a bunch of old batteries sitting around off-gassing in my garage. Rechargeable batteries reduce waste in a dramatic way. 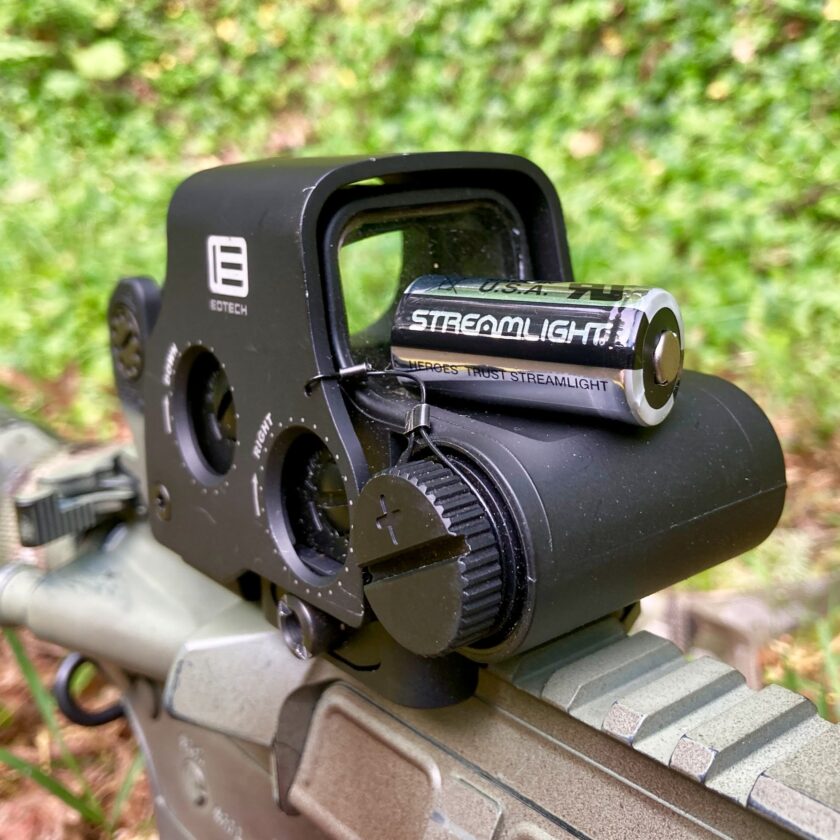 Secondly, I’ve yet to delve into rechargeable CR123 batteries. I have these on hand for a few select items: my EOTech, and WMLs for my pistol, carbine, and shotgun. Since I put these in the battery case, close it, and don’t see it for six months I prefer the confidence I have in leak-proof lithium batteries. Maybe I’ll get there with rechargeables one of these days, but I’m not there yet. Though…I should acquire some rechargeable CR123s for the ability to power sights and lights via solar power during a long-term emergency. If you don’t have a few spare CR123s on hand, you should fix that immediately. A couple dozen should power your sights and lights for several years, and maybe a decade if used sparingly.

Finally, since I had a lot of lithium AAs stockpiled, I’m certainly not going to throw them out. The shelf life on Energizer lithiums is 20 years, so they aren’t a bad prep to have. However, I can now shelve what I have and know I’ll have them, and I don’t need to constantly worry about replacing them. They’ll come in really handy when my rechargeables stop functioning, as barter items or – more likely – “good will” give-out items, and items to take care of less-prepared friends and family.

Adopting rechargeable batteries has absolutely made me better prepared. I have a fresh battery in my flashlight every week regardless of use and I’m not throwing away expensive batteries that still have life in them. I also now have a grid-down battery supply that vastly exceeds my stockpile of lithium, non-rechargeable batteries. Rechargeable batteries are expensive and do require some up-front investment but in my opinion are absolutely worth it. If you aren’t ready to make the switch entirely, pick up a small set and a charger and give them a try.