I told you guys several months ago that I would be replacing the M&P Shield that I was, at the time, carrying. I also told you I’d give a look at the gun I was considering as a replacement. Today I will come through on that and give you a quick look at the Nighthawk Custom Carry 1911. Before I get into the specifics of the gun, let me explain why I chose to the give the old super-centenarian a go.

Aviators acknowledge a concept known as Primacy of Learning. This concept posits that the a pilot’s first air frame will ingrain habits that will last forever. A pilot in a second (or third, or fourth) aircraft will reach for the place the radio sat in his first platform, or steal mistaken glances at where the altimeter tape “should” be – even years later. A friend, pilot, and fellow gun guy explained this to me. We had been talking about a similar phenomenon I observe in relation to the 1911. Every time I pick up a pistol – any pistol – my right thumb extends high in preparation to lower onto the comfortable curvature of an extended 1911 thumb safety. 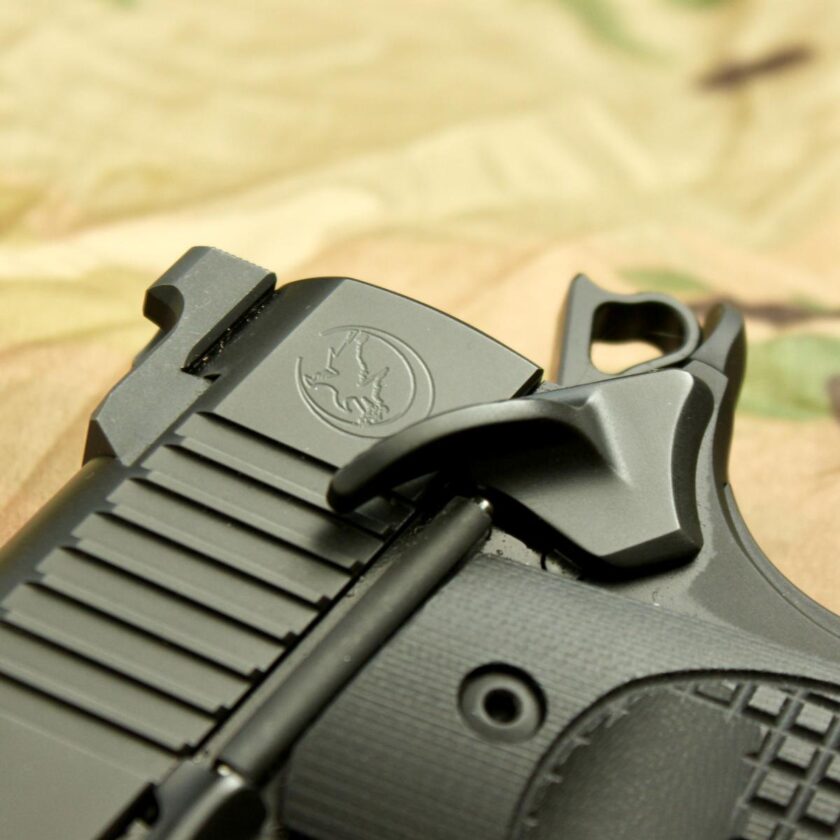 I had almost zero experience with handguns when I joined the military. My time in the “big Marine Corps” did precious little to correct this. It wasn’t until I attended a 10-week close quarters battle course with my Force Reconnaissance platoon that I really got acquainted with pistols. Over the remainder of my career I spent hundreds of hours on the range under expert instruction and supervision, and probably fired in excess of 100,000 .45 ACP rounds. There was a pervasive competitive vibe between individuals and teams, and individuals were constantly being evaluated. There was also the pressure of failure: failing a weekly pistol qual meant you had to wear an empty holster in the shoot house that week. Failing the course meant you probably didn’t deploy.

All of this training was done with the MEU(SOC) .45 – a M1911A1 that was hand-built by the Marine Corps’ Precision Weapons Shop. Because I carried a 1911 at work, I also carried a 1911 in my personal life. I believe that because this was my first real experience with any handgun, and because it was so intense, it impacted me more deeply than it otherwise might have. It created some deep grooves in me that have never gone away. Though I can shoot well with just about anything, nothing feels quite as good to my hand as the slender grip frame of the old 1911.

There are some reasons I have resisted the 1911 ever since leaving the military. It’s certainly not a perfect platform. The 1911 is a notoriously finicky eater. The first question you are likely to get if you show up to a shooting class with a 1911 is, “is that thing gonna run?” Though I’ve been lucky and have had the privilege to run incredibly reliable 1911s, I’ve also owned and shot plenty that didn’t run. You can buy a Glock or M&P and virtually guarantee it will work. You can’t do the same with a 1911. 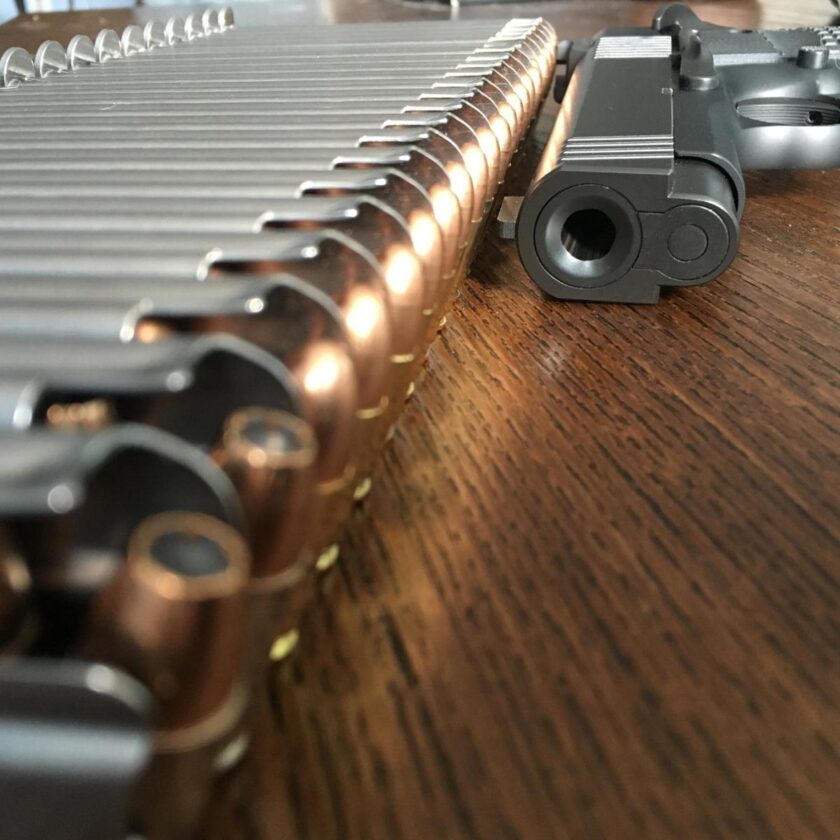 Two factors that exacerbate the reliability problem are size and caliber. The 1911’s reliability becomes more of a crap-shoot when it is scaled down to smaller commander and officer versions. Reliability becomes an even more iffy proposition when chambered in a scaled-down cartridge (i.e. 9mm). Since I can’t carry a full-size gun and I am pretty insistent on carrying a gun chambered in 9mm, I found myself in a bit of a quandary. Don’t get me wrong – plenty of manufacturers make compact 1911s, and plenty make them in 9mm. But the 1911 community can be very polarized, and determining what is and isn’t a “good” gun by reading reviews can be tough. So, I bit the proverbial bullet and ordered a Nighthawk Custom Carry, assuming that a custom, hand-built gun would have the best possible chances of being reliable.

The Nighthawk Custom Carry starts with a custom, aluminum Officer-length frame. In addition to being shorter than a standard 1911 frame, this particular frame has been thinned. This shorter grip makes concealing the gun easy; the Nighthawk’s 4.99″ height is not even 1/2″ longer than the Shield I’ve been carrying. The thinned frontstrap is checkered at 25 lines per inch. The grips are thin, “frag pattern” G-10 that feel great in the hand but don’t rub you raw when carried directly against the skin. The left grip panel has a deep relief just behind the magazine release. 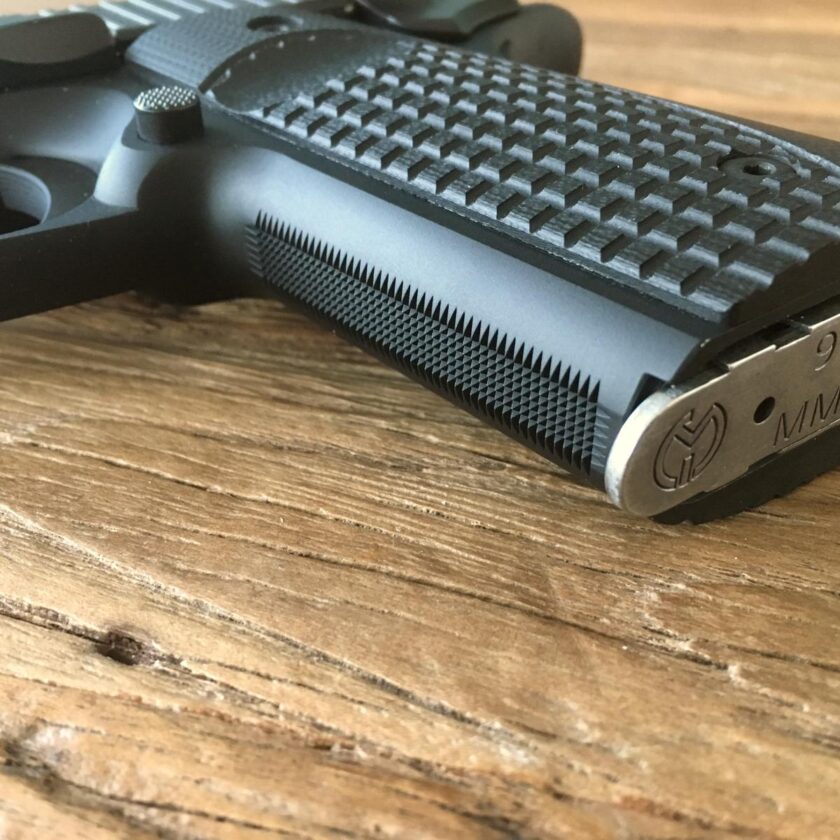 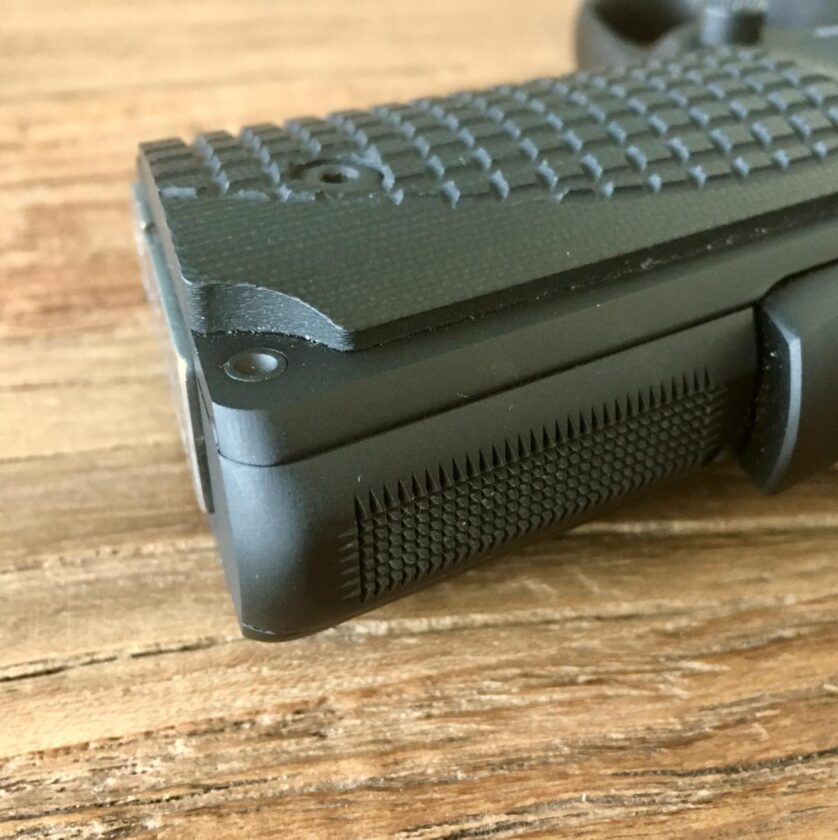 The Nighthawk Custom Carry accommodates a single stack, eight-round magazine. The gun shipped with two magazines, and I ordered a few more. So far I’ve had no magazine-related malfunctions and am pleased with their performance.

The trigger on the Nighthawk Custom Carry is a short, solid variant. Though this part is typically uncoated stainless, I opted to have the trigger (and barrel) blacked out with the same Nitride finish that covers the rest of the gun. This trigger is the tightest fitting 1911 trigger I have ever seen. There is zero play whatsoever in its fitment. The trigger pull is extremely crisp, as one would expect. Unfortunately I have yet to be able to put a trigger pull gauge on it. 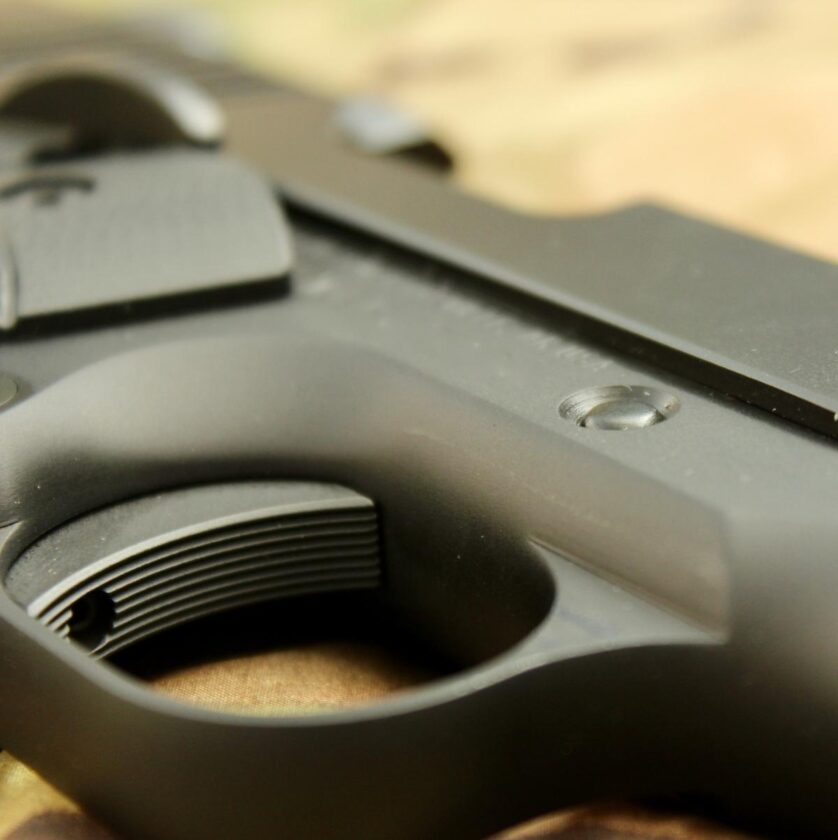 I opted to have an ambidextrous safety added to this gun. I don’t know that this is strictly necessary, but I do enough weak-hand-only shooting to make it desirable. Operation of the safety is extremely positive with good tactile feedback. The shape of the lever is really what sets this one apart; I’ve owned a number of 1911s, and some ambi safeties have a tendency to pinch the web of my firing hand between the safety and the grip panel. This one is as good as any I’ve ever seen. 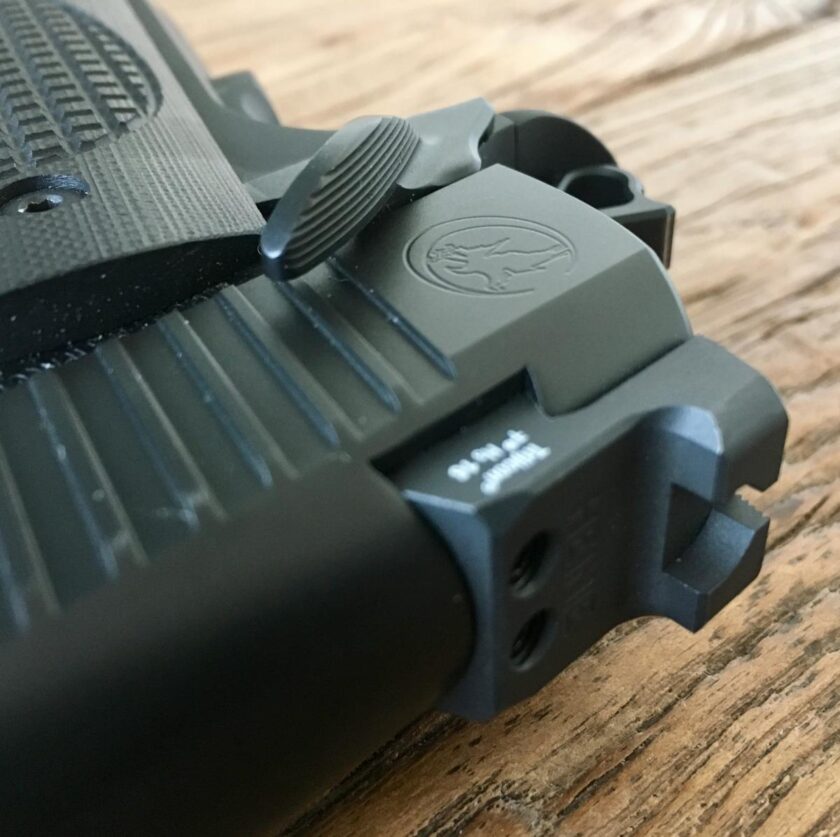 The slide release is also enlarged, but not overly so, and is gently curved. As shown in a previous photo, its pin is cut flush with the frame, and sits in a beveled hole. This touch is both good looking, and prevents a malfunction I’ve seen a couple of times: accidentally pushing the pin (and the slide stop) out enough to interfere with the gun’s operation. 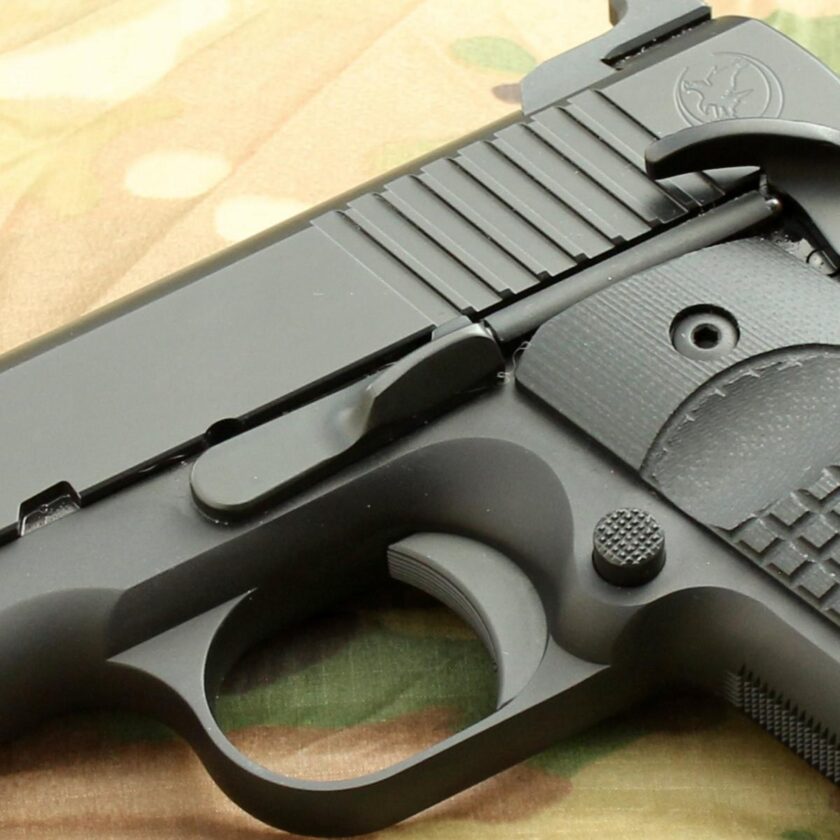 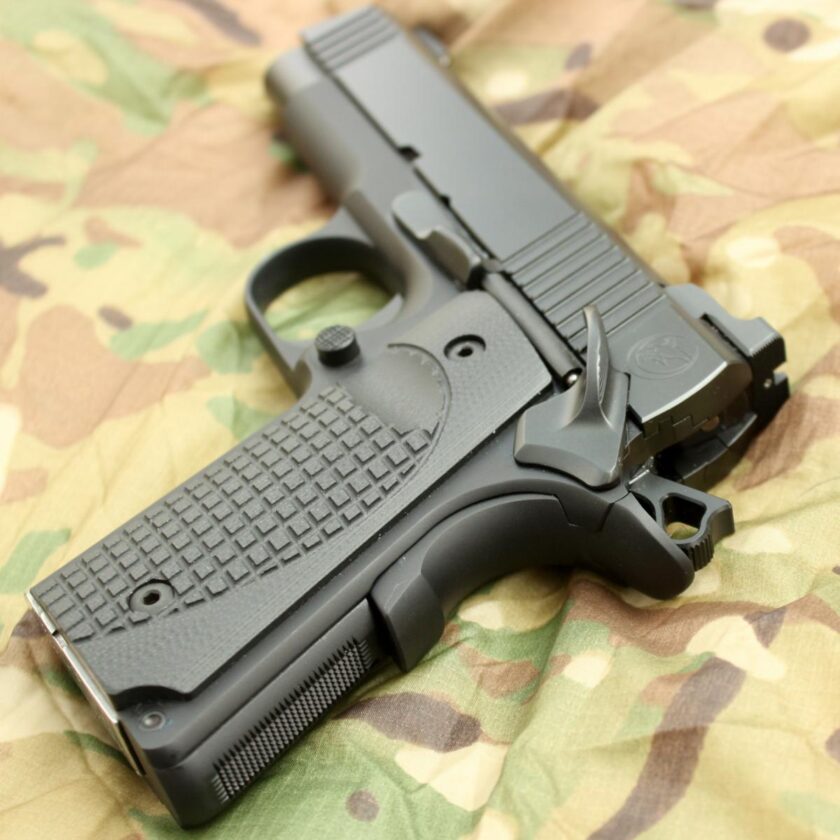 The barrel on this model is a custom length from Nighthawk. Standard commander-length barrels are 4.25″ and most officer models come with a barrel around 3.5″. The Nighthawk Custom Carry deviates from convention by splitting the difference with a 3.8″ bull barrel. This additional length doesn’t really make the gun harder to carry, but it does contribute to a more balanced overall appearance. The barrel is fluted, as is the barrel hood, and is semi-crowned to sit flush with the slide. The barrel is mated to a full-length guide rod and Nighthawk’s proprietary “bow tie” plug. 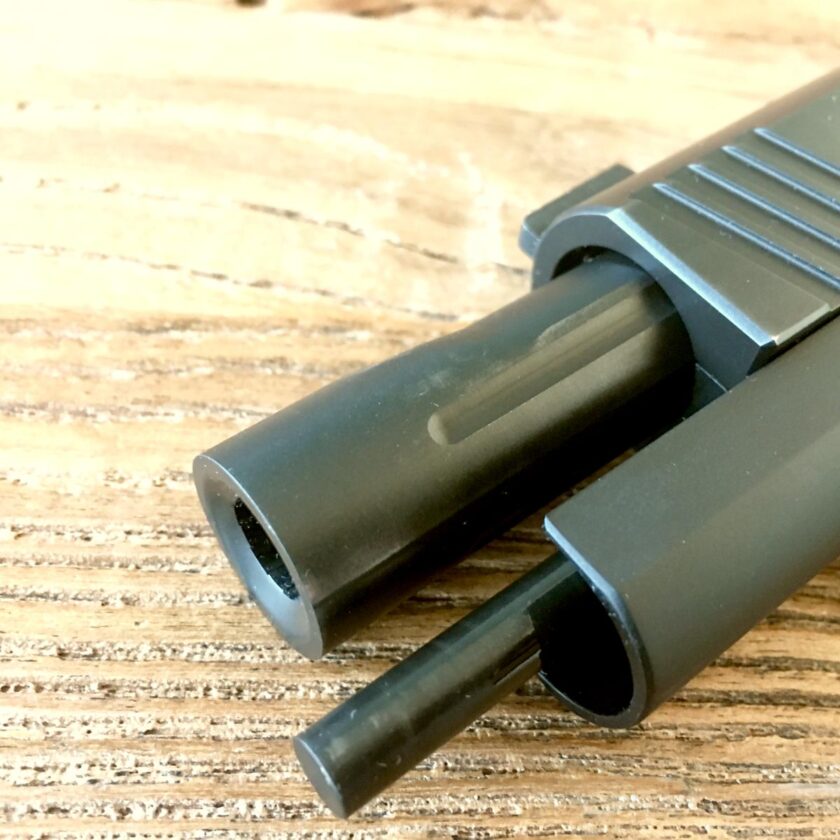 The slide on this gun features coarse rear cocking serrations. Though not offered as a catalog option, Nighthawk was also willing to customize my gun by adding forward cocking serrations, as well. The long flats of the slide are completely naked, which I really appreciate. The only branding on the gun (other than the manufacturer, listed in the normal 1911 location above the right grip panel) is two subdued Nighthawk logos behind the rear cocking serrations. The slide-to-frame fit on this gun is absolutely phenomenal! The slide feels like it is moving on ball bearings. Lock up is extremely tight – shaking the gun as hard as I can it makes no noise whatsoever. This is in stark contrast to many 1911s I’ve owned, which rattled like boxes of spare parts. 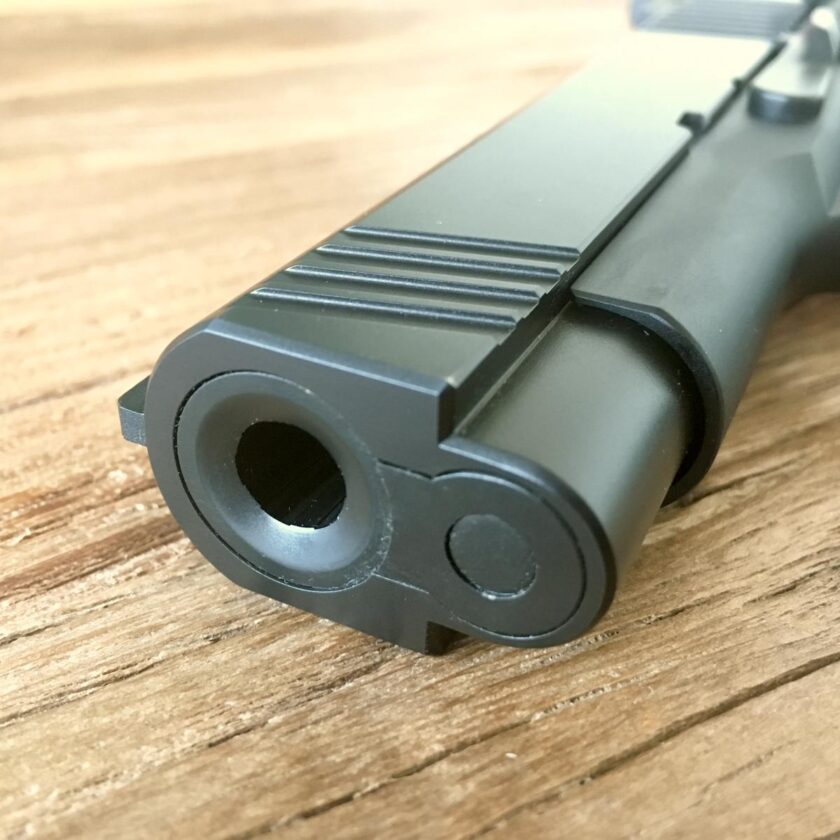 The sights on the Nighthawk Custom Carry are Heinie Straight-Eights. I greatly prefer this arrangement over the more typical 3-dot style, and really like the Heinies. The one minor change I requested here was the “ledge” style rear sight rather than the smooth, ramped rear which is standard on this model. 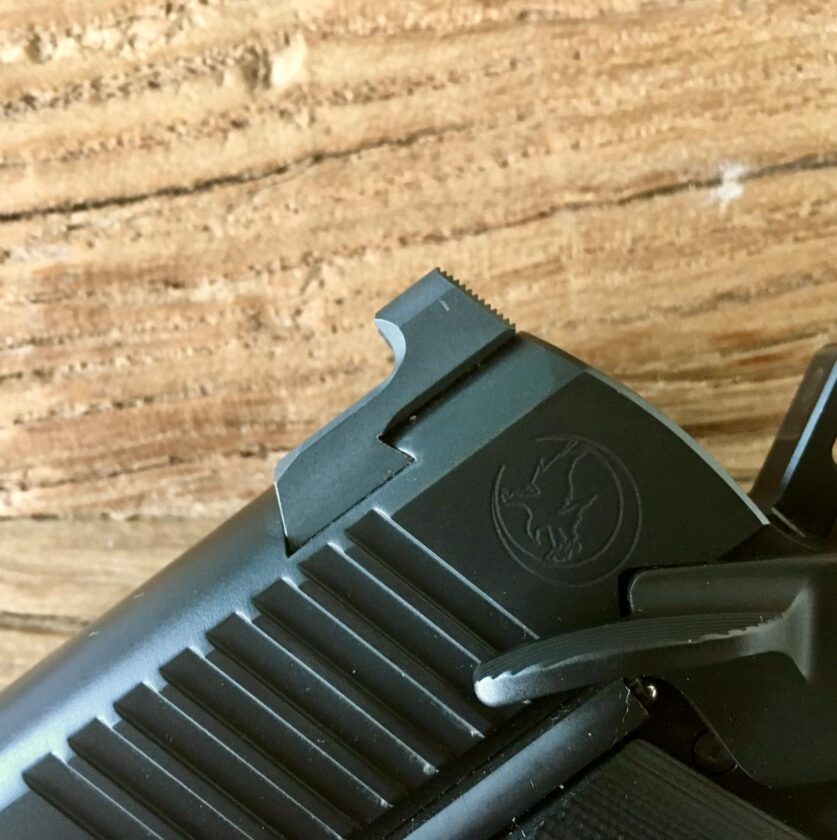 I ordered this gun many moons ago and have only had it about a month. Make no mistake – I wasted no time getting it to the range. So far I have put 750 rounds through this firearm. Seven hundred of those have been S&B 124-grain ball, and 50 have been Federal HST 124-grain +P. These first several range sessions have been conducted primarily in the interest of ascertaining the Nighthawk Custom Carry’s reliability.

I have had two malfunctions with the gun, and both occurred within the first 80 rounds, and within 15 rounds of each other. Both were failures to return completely to battery. I imagine these malfunctions are a result of the gun’s tight tolerances. Since they haven’t recurred I’m [mostly] comfortable with this, but will be more so after another few hundred more rounds, so the testing continues. 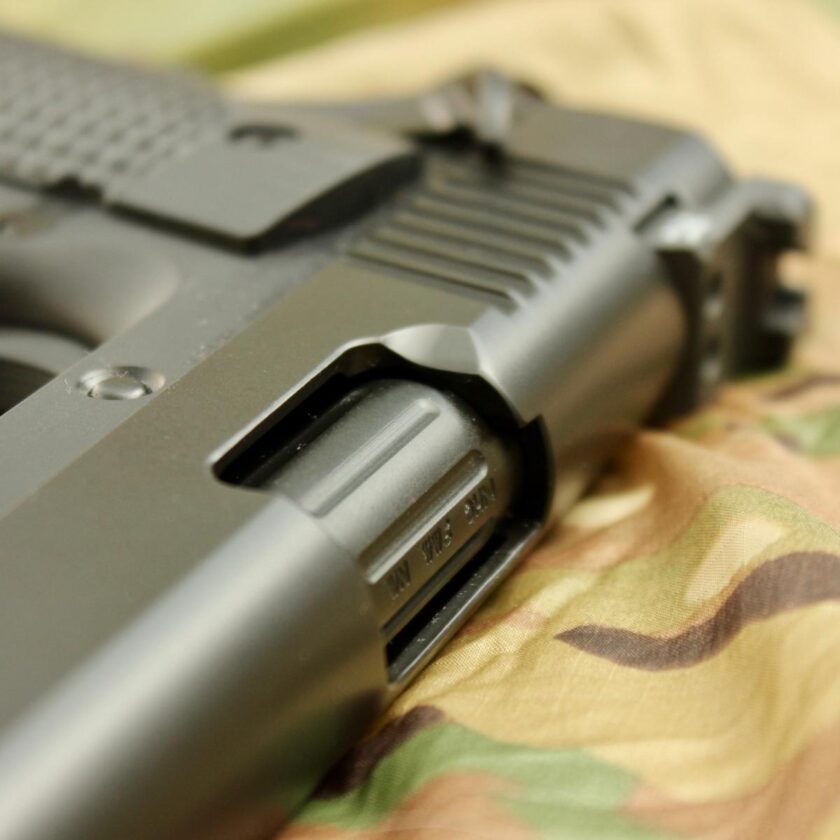 Accuracy with this gun is, well, better than me. I am consistently able to keep a full magazine within the 7-ring (the black circle) of a NRA bullseye target at 25 yards. I’m working hard to make myself worthy of this gun’s accuracy potential.

Recoil with the Nighthawk Custom Carry is, as expected, extremely manageable. At 26 ounces he gun is heavier than my Shield by about five ounces. The larger grip surface, checkered frontstrap and mainspring housing, and the G-10 grips provide ample purchase. Overall I am very happy with the gun’s range performance. 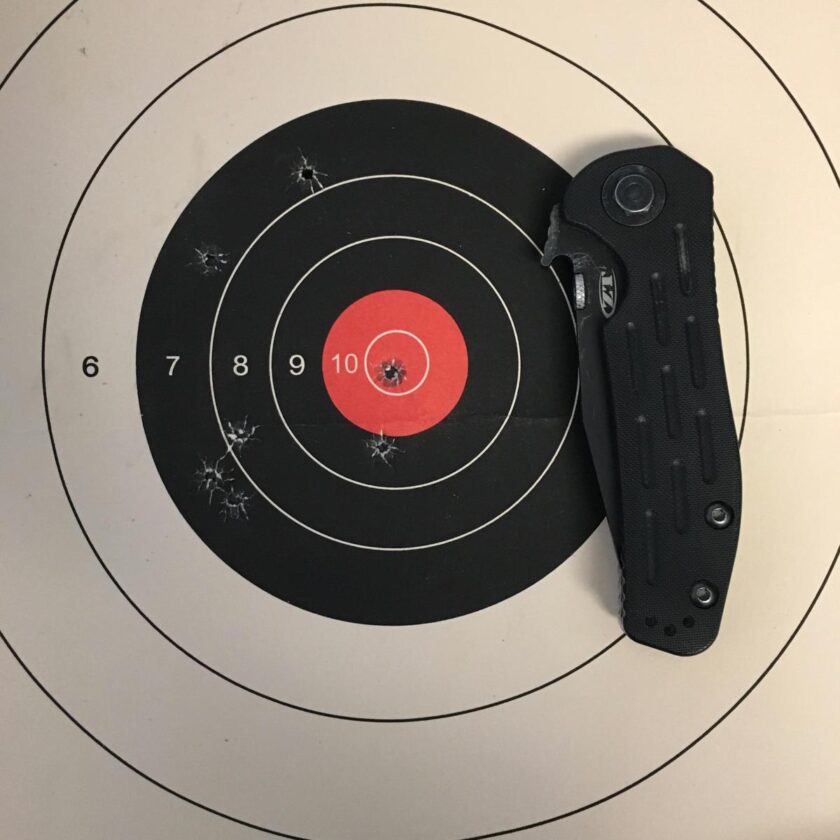 When adopting any new handgun, finding a holster can be a chore. Since I’m not carrying one of the predominant plastic handguns that get carried these days, my choices were slightly more limited. The first holster I ordered after reading many reviews was the G-Code Incog Eclipse. I purchased this rig sight unseen and regretted it. For me, the Incog Eclipse offered two carry modes:

Obviously the G-Code was unsustainable. The next holster I purchased was a massive winner, though. At the urging of my close friend and American Warrior Society co-host Rich Brown , I purchased a holster from Precision Holsters. I purchased their “Ultra Appendix” model using the American Warrior Show’s 10% discount code, “seekAWS”. 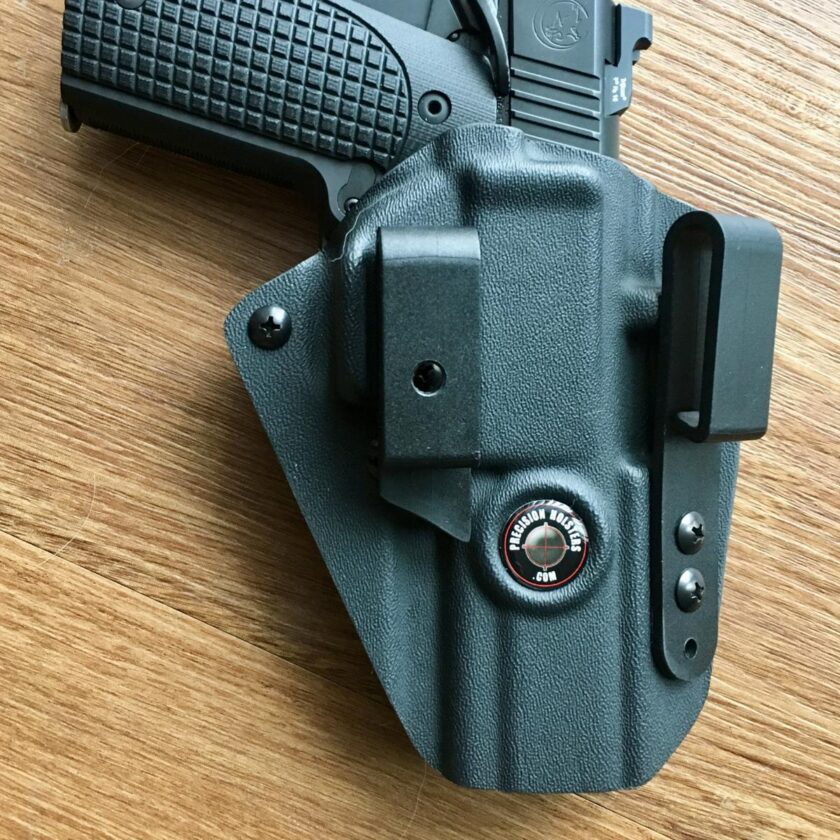 This all-Kydex holster keeps the butt of the gun tucked in and is extremely comfortable. I have been carrying steadily for two weeks with this holster and I can’t recommend it highly enough.

The other carry factor that the 1911 brings to the table (at least for me) are the various manual safeties. The thumb and grip safeties, and the ability to control the hammer help alleviate my nervousness about reholstering in the appendix position. Expect to hear more about this soon.

I know this topic will come up, so I’ll go ahead and address it. Yes, I know that I could have purchased x number of [insert firearm model here]s for the price of the Nighthawk Custom Carry. However, I ask you to consider the following: In my life I have purchased an engagement ring. That ring set me back over two times what this pistol cost. Not one person said I shouldn’t have bought it. No one told my fiance she could be perfectly engaged with a $500 ring. No one pointed out how many Glock 19s I could have bought instead. But guess what I have to show for that engagement ring now? Guess who got to sell it and financially benefited from it (hint: it wasn’t me!)? Consider this my “engagement ring” to myself! 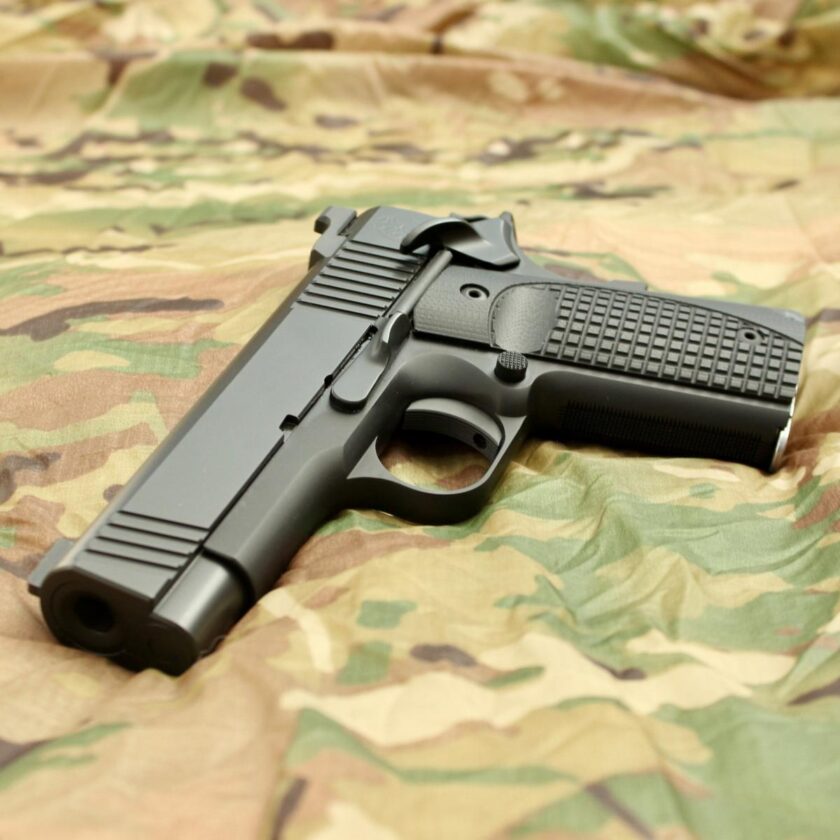 Do you need a custom firearm to be extremely well defended? Absolutely not. Is the 1911 the definitive, end-all/be-all firearm? Nope. But for a guy with a ton of 1911 experience, I am extremely pleased with the Nighthawk Custom Carry. Having a 1911 – any 1911 – back in the stable is like having an old friend back, and this one is, well, amazing. If I’m being honest, I was worried a custom gun wouldn’t live up to the hype. I was concerned that I would have an incredibly exacting eye and it would find something to be unhappy with. So far it hasn’t.