On Being a Beginner (Again)

Though this post might look like an article about archery, it’s actually about being a rank beginner at a physical skill. Though my goal in taking up the bow was to learn archery, I’ve already learned something much more important: what it’s like to be a beginner. It sucks to suck, but there are some valuable lessons here for instructors.

The Curse of Knowledge

I’ve attended a lot of shooting instruction over the years, ranging from classes just a few hours in length to courses that were five or more days long. Most instructors who cater to a paying, civilian clientele (rather than, say a “captive” LE or military audience) are generally shooting enthusiasts. They’ve been shooting for years. Good ones attended various training. Some have military and/or LE backgrounds. And that’s good; for it to be otherwise would be for the blind to lead the blind.

This creates a problem, however. Enthusiasts often (more often than we’d like to admit) suffer what is called “the curse of knowledge.” That is, they know so much about a subject they can’t imagine knowing nothing about it. They begin with assumed knowledge, believing everyone must already understand how to execute certain basic tasks and skills. They use terminology and lingo that might sound simplified to them, but is still way over the heads of their audience. Alternatively they dumb it down so much it sounds patronizing. The net result is simple: difficulty communicating. Of course this is not always the case (I have trained under some phenomenal instructors), but it takes years of experience instructing a subject to learn how to simplify something appropriately to your audience.

As one who made his living as an instructor for right around a decade I have some personal experience from which to talk about this. That’s largely because in the early days, I understood this concept very poorly…and acted accordingly. At first I didn’t teach techniques a sufficiently basic level. Once I learned to lower knowledge base, I often went too fast and left students in the dust, especially the slower ones. Only when I had corrected that behavior did I realize I had an even bigger problem: large, underlying principles that were foundational to the class weren’t clear to my students because of my failure to make them clear.

It took a couple of years of teaching my curriculum regularly to refine it to the point that was a well-oiled machine. At this point my classes, when I teach, are well-rehearsed, smooth, and scaled to my audience, and I am extremely happy with them. I update my curriculum occasionally, but my updates now are to tools and techniques that change. The principles are valid and unlikely to change substantially in the future. But that is the result of a lot of self-study, introspection, time spent honing the craft of instruction. I feel like I am an excellent instructor.

Still, there is one thing I have had been completely inability to do until recently. Until I began shooting a bow I simply could not understand what it is like to be a brand-new student in the pursuit of a physical skill. Taking up archery has taught me a little bit about archery, but it has given me a wealth of information about being a brand-new beginner. You can rest assured that information will be applied when I put the instructor hat back on.

The shooting instruction world is full of cliches. “Slow is smooth, smooth is fast,” “move fast, shoot slow,” “aim small, miss small” are a few you’re probably familiar with. Another that is more germane to this conversation is, “I’d rather have a student with zero experience because they don’t have any bad habits.” It’s very cool to instruct long enough and “wide” enough to see that in your students. It’s even cooler to take something up and recognize it in yourself.

I guess I’m not “brand-new” with a bow in the purest sense of the word. When I was a kid I got a compound bow for Christmas (think something you’d get for an 8-year old, not something designed for a 15-year old). That was one of the best Christmases ever: my dad was into bowhunting at the time and I ran around constantly, for several years, shooting that little red compound bow. Of course I had no instruction so I did what I saw my dad do. I didn’t realize it at the time, but my dad was no world-class archer. He killed a few deer but he left a lot to be desired in the technique department. There were a couple things I imitated that I still retain, decades later. 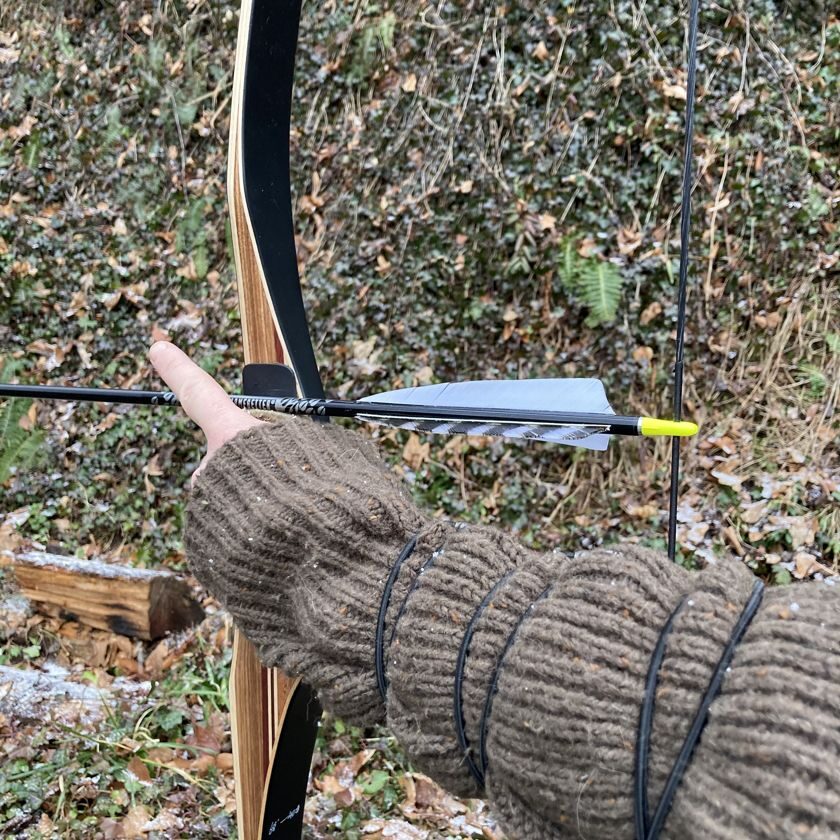 One of these is extending my index finger to keep the arrow from falling off the arrow rest. I should just trust my equipment (the arrow and the rest) to work correctly, but I had experience that I didn’t even know about working against me. Every time I draw my bow I have to remind myself to put that finger down, on the grip, where it belongs. Having the finger up serves no positive purpose. It does impact my shooting negatively, though. It affects the pad placement of my left hand, and pad placement is important to correct draw technique. It causes me to have to move my finger after the bow is drawn, imparting movement into the bow. There’s no reason to do it, and good reasons not to do it.

As soon as I saw this happening and understood it for what it was I was blown away. I finally understood that shooting axiom of “better to be new and lack bad habits” in a way that I never had before, even though I’d seen shooters (and other types of students) with bad habits. Even more importantly, I am beginning to see things from the student’s point of view rather than that of an instructor; I am beginning to understand exactly how difficult it is to break bad habits. I understand exactly how frustrating it is to know you are doing something wrong, yet catch yourself doing it over and over again. And I’m beginning to develop an appreciate for the discipline involved in breaking a bad habit.

Another lesson that archery has taught me in the past month is how difficult it can be to perform “simple” tasks. In shooting classes, for instance, I have seen instructors get frustrated at a student’s inability to do something that seems – to the experienced expert – extremely simple. A “surprise trigger break” is a good example. I have seen this style of trigger management taught quite a bit; it was taught in my military days. Gradually increasing the pressure on the trigger until it breaks seems like something that everyone should be capable of. As I’m learning it’s not quite so simple…

The analog to trigger management in the world of traditional archery is the release of the string. Releasing the string seems very simple: simply relax your fingers and let the string slide through. This is quite the mental game. Sometimes I can do it. Other times my conscious mind takes over and tries to get my fingers off the string as fast as possible, extending them quickly. When I forget everything else I’m doing with the bow and really focus on the release I can do it…sometimes. Sometimes, even when intently focused on the release I still mess it up. I still “pluck” the string. I still “actively” let go rather than passively relaxing my fingers. Even when focusing on that single, simple point of performance I still mess it up.

This is probably pretty important for the instructor to understand. Learning something that seems simple to the instructor or experienced practitioner can be very difficult and frustrating. I simply did not have this perspective until I stepped into a world about which I knew basically nothing.

Applicability For Instructors and Students

At this point you may be questioning the utility of this information in your own life. Here are some things to think about.

Instructors: as a professional instructor I will apply these lessons immediately and without hesitation. In fact, I wish I had taken up a new skill like this five years ago, just to understand what it’s like to be on the other side of the instructor. If you are an instructor, I encourage you to take up a skill that is well outside of your area of expertise. Take up a sport that requires equipment and some physical ability. Snow-skiing, fly-fishing, bowling, rock-climbing, or guitar-playing.  Then seek some introductory instruction, maybe the same amount of instruction your average student will pursue. Practice on your own or with your buddies.

This will provide a vivid demonstration of how difficult it is to be a student of a brand-new skill – that feeling of patting your head while you rub your stomach. This will enable you to better understand your students. If you work with beginners day-in and day-out, shouldn’t you have some recent perspective on what it’s like to be a beginner? I contend probably so.

Students: If I were attending an introductory class, I would want to ask the normal questions. What is the instructor’s experience, what training has the instructor received, and who has he/she trained with? But I have a new question: what are the instructor’s outside interests/hobbies/skills? If the answer is “nothing” I will probably ask a follow-on or two, including “when was the last time you were a beginner at something?”

I understand that instructor was a beginner in their craft at some point, but if it was 35 years ago they’ve probably lost a bit of perspective. I’m not saying someone who ONLY does shooting is unsuited to teaching shooting (obviously), and I’m not saying an outside hobby or interest is absolutely necessary, But if given a choice I’d take an instructor who knows what it’s like to be a student. As a beginner I guarantee I’ll be asking future archery instructors, “when was the last time you were a beginner at something?”