Poisonous Plants of the Southern Appalachians

Water hemlock is absolutely fascinating to me, precisely because of its danger. It is easily one of the most poisonous plants of the Southern Appalachians. For that matter it’s one of the deadliest plants in all of North America. 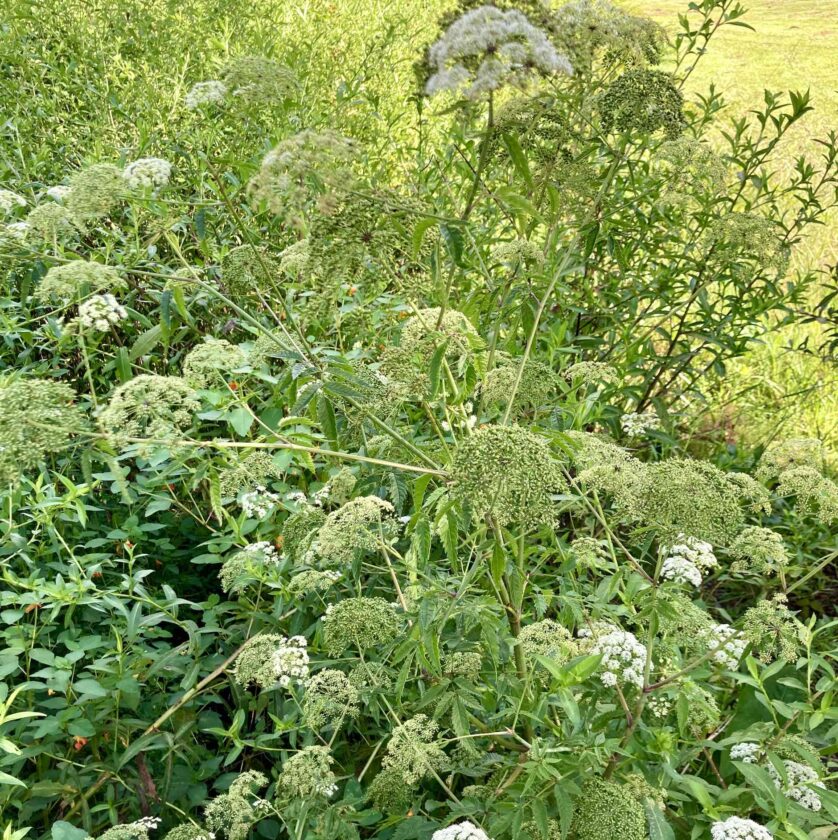 This particular plant grows along side a popular walking path around a small lake. Some of its branches push through the pickets of a small foot bridge. Hundreds of adults, kids, and pets brush past this plant every day without knowing what it is or the danger it presents. 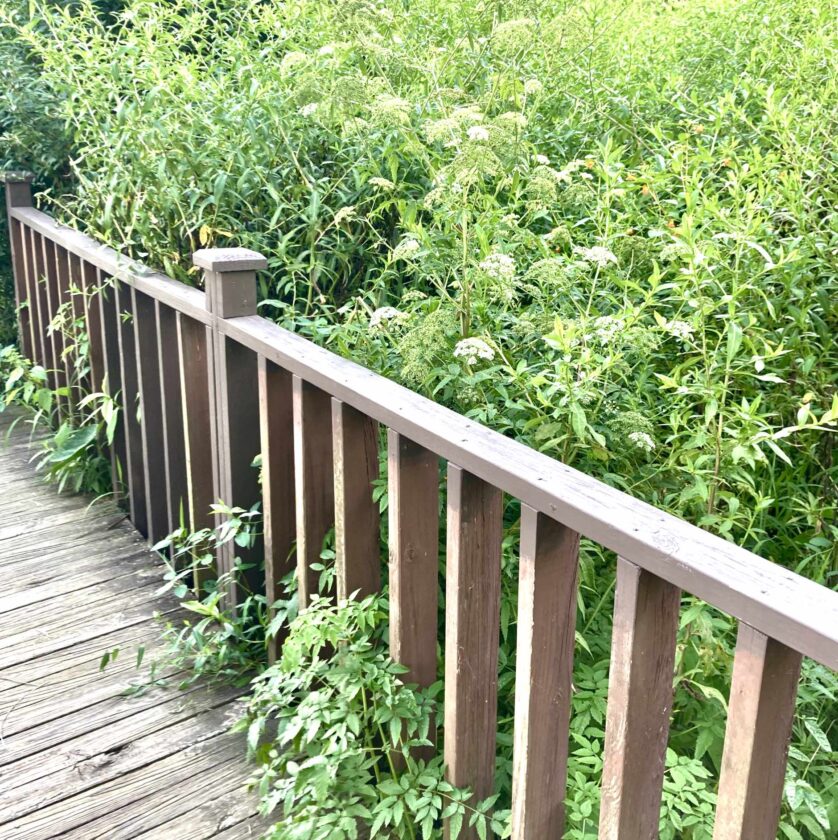 Ingesting even a small amount of water hemlock can be fatal. The cicutoxin in this plant causes seizures, which result in overheating, ventricular tachycardia, and death within as little as an hour. It sounds like a very unpleasant death. There is no antidote, only supportive care. 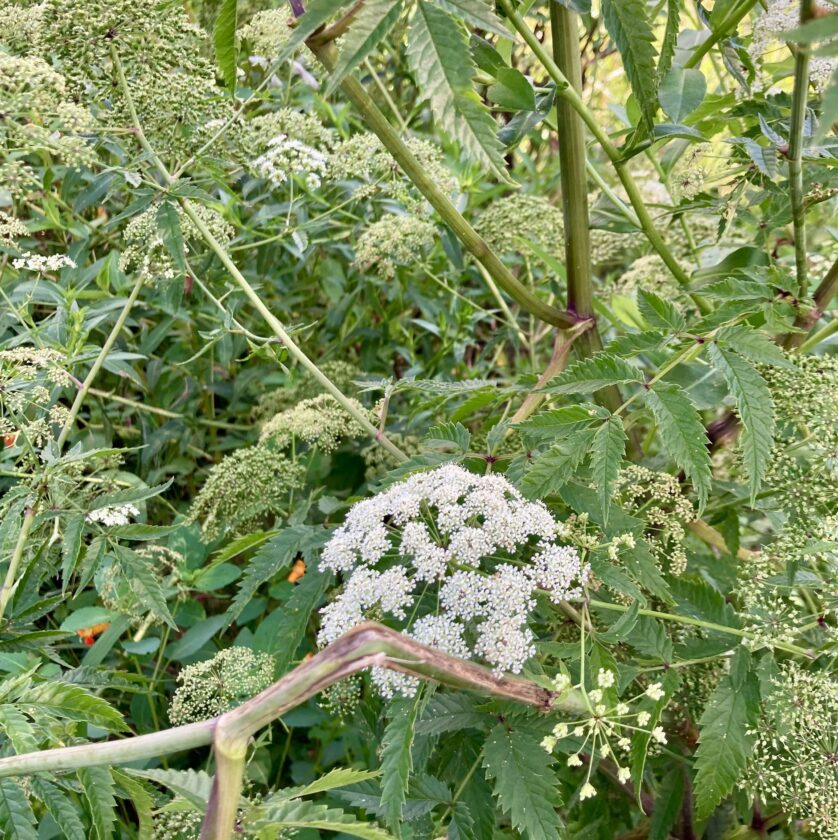 I find it a little strange that we are OK with this exquisitely deadly plant growing where children play, yet my house and property could be seized under Federal Asset Forfeiture laws if I were caught growing even a single marijuana plant. 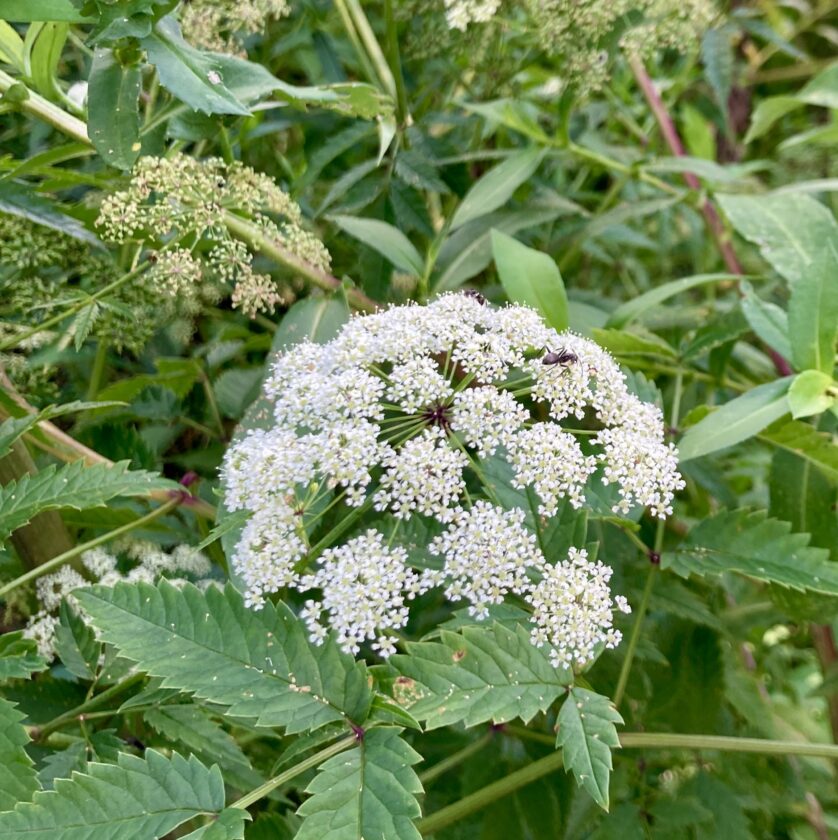 Water Hemlock is sometimes confused with certain wild edibles. Water hemlock looks somewhat similar to wild parsnips and wild carrots, which makes them (the wild parsnips and carrots) dicey food sources unless you are very, very skilled and attentive. The consequences of mid-identification are grave. 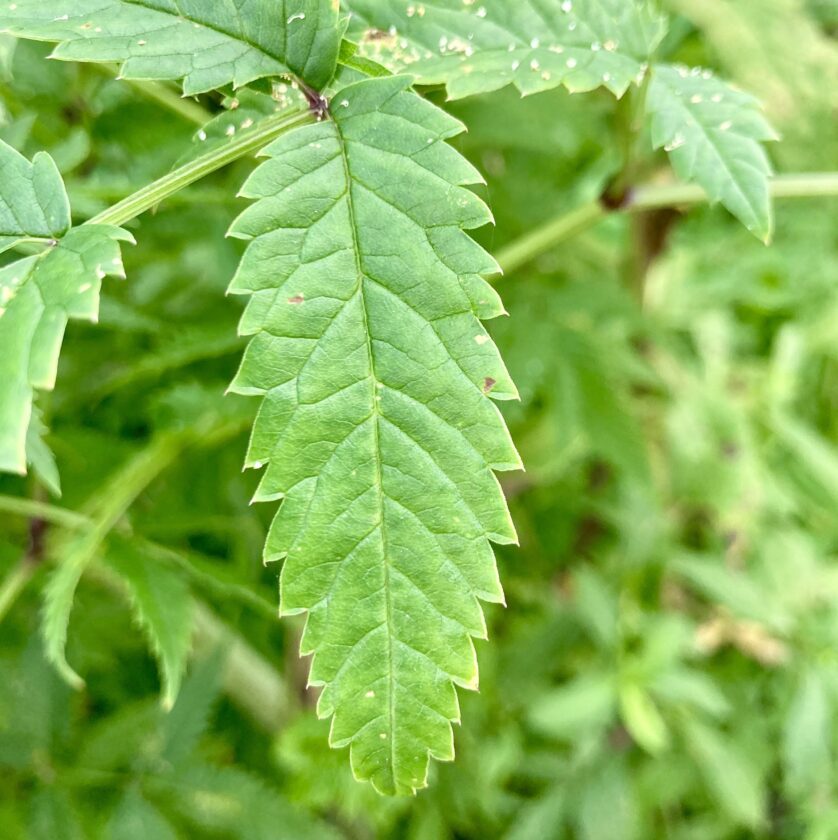 A key indicator of this plant is leaf veins that go to the valley the between the tips of serrations, rather than to the tips of each serration. All parts of this plant are poisonous. In fact, you want to avoid touching it because sap on your hands can enter your body through your eyes or mucous membranes of the nose or mouth. 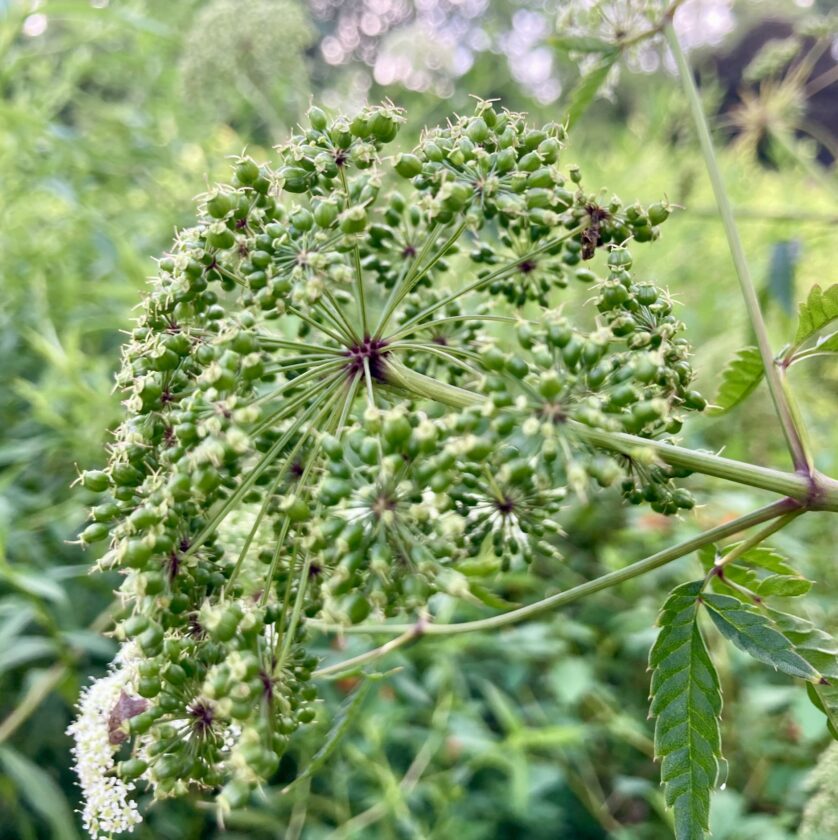 Pokeweed grows absolutely everywhere! It is probably the most common of the poisonous plants of the Southern Appalachians. You can find it growing in the wild, on roadsides, in my yard, and I even recently saw it growing on a patio at a brewery in town. 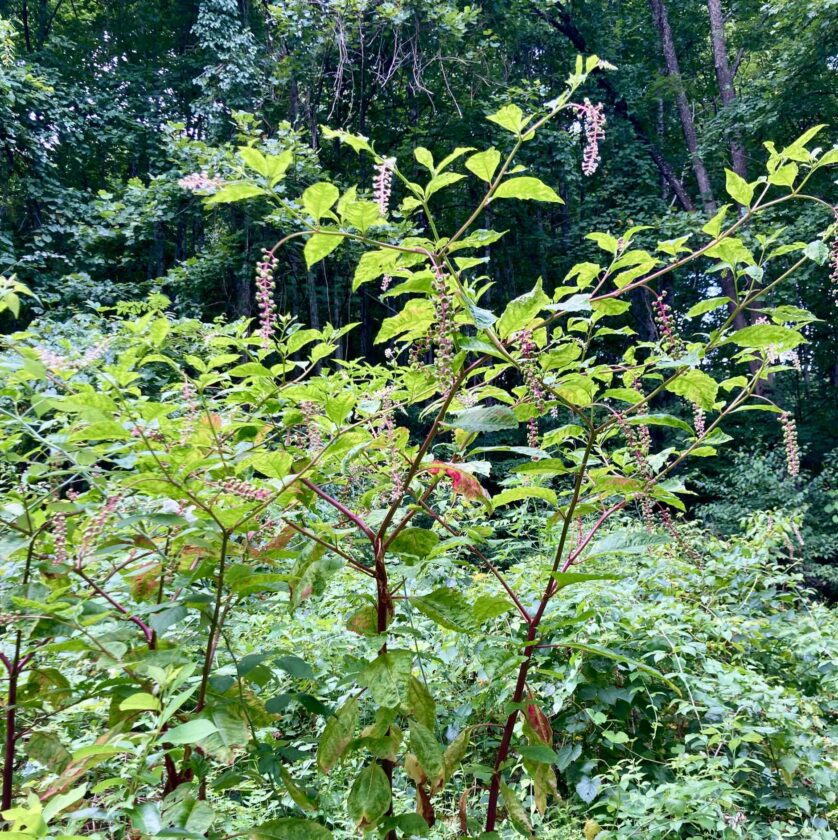 Pokeweed is prolific, the plants are large, and it produces prodigious bunches of beautiful, purple berries. I’m sure these berries are appealing to children; I’m honestly surprised many more people per year aren’t poisoned by pokeweed. I’ll attribute it to people spending very little time outdoors. 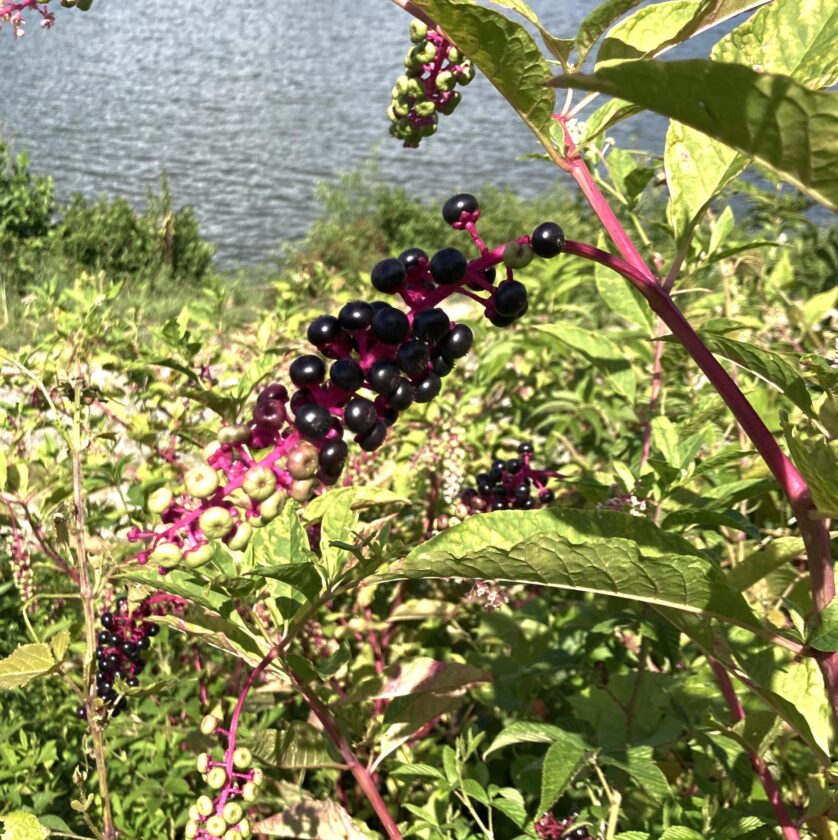 All parts of this plant are poisonous, but the roots, leaves, and stems contain the heaviest concentration of toxins. Symptoms of pokeweed poisoning include seizures, tachycardia, hypotension, dyspnea, and bloody diarrhea. 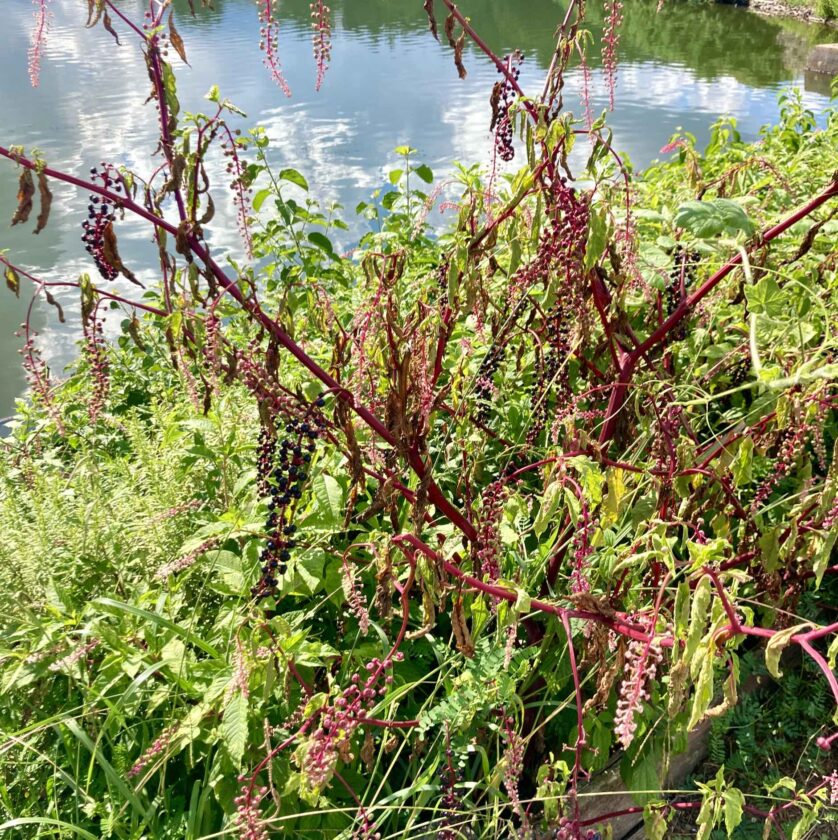 Although known to be poisonous, this plant has still been utilized as a food source by poor Southerners. I vividly remember my grandfather talking about eating “poke sallet.” The young leaves can, apparently, be rendered edible by boiling them three times and discarding the water each time. It’s difficult to imagine how poor you’d have to be to use a poisonous plant as part of your diet. Dolly Parton famously reminisces about painting her lips with pokeberry juice when her mother wouldn’t let her have lipstick. That said I would strongly advise against attempting to ingest any part of the pokeweed plant. 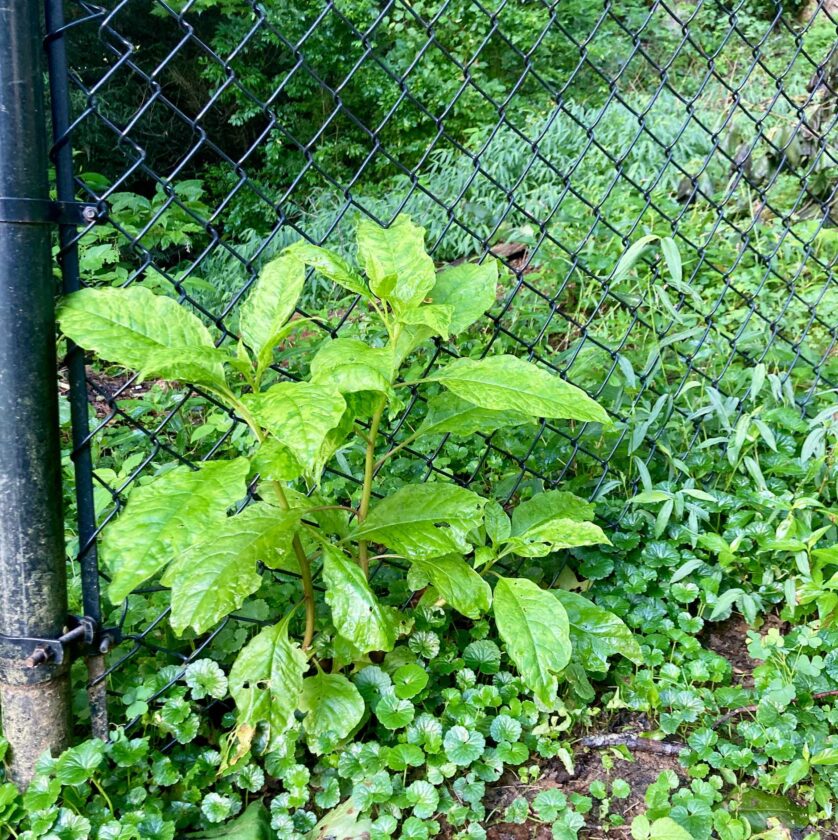 Mayapple, sometimes called “American Mandrake,” is a weird one. Some lists call it poisonous while others say it is edible. So which is it? I will concur with and most experts who consider it poisonous. All parts of the plant are poisonous. The sole exception, apparently, is the ripe fruit…but only in small quantities. 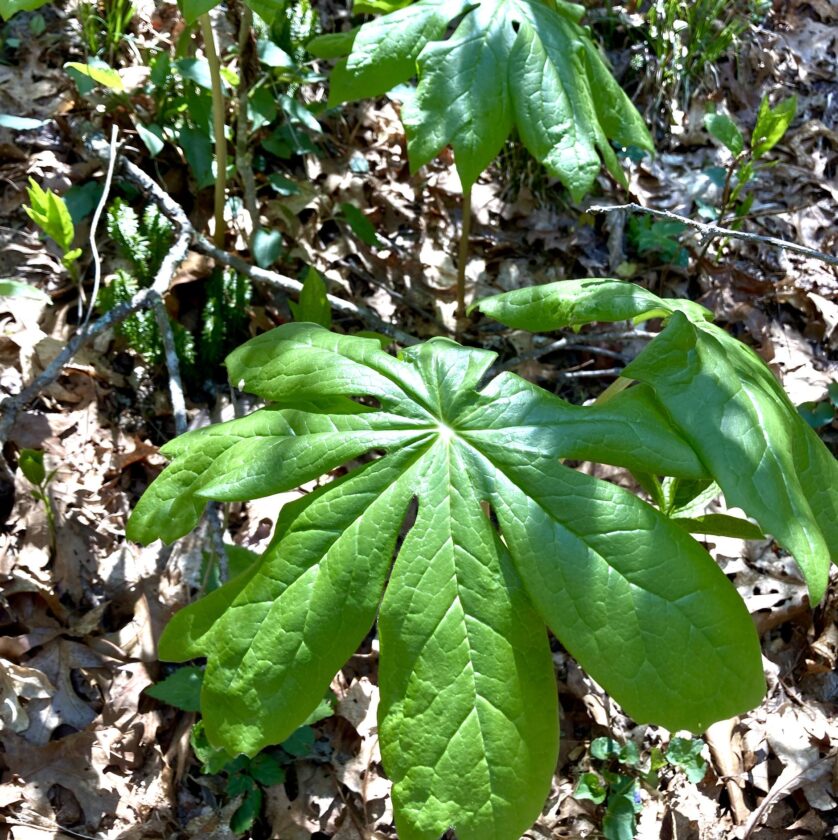 How do you tell when the fruit is ripe? The picture below depicts a very young fruit. It is green and very firm and obviously not ripe. This photo was taken on May 1st. 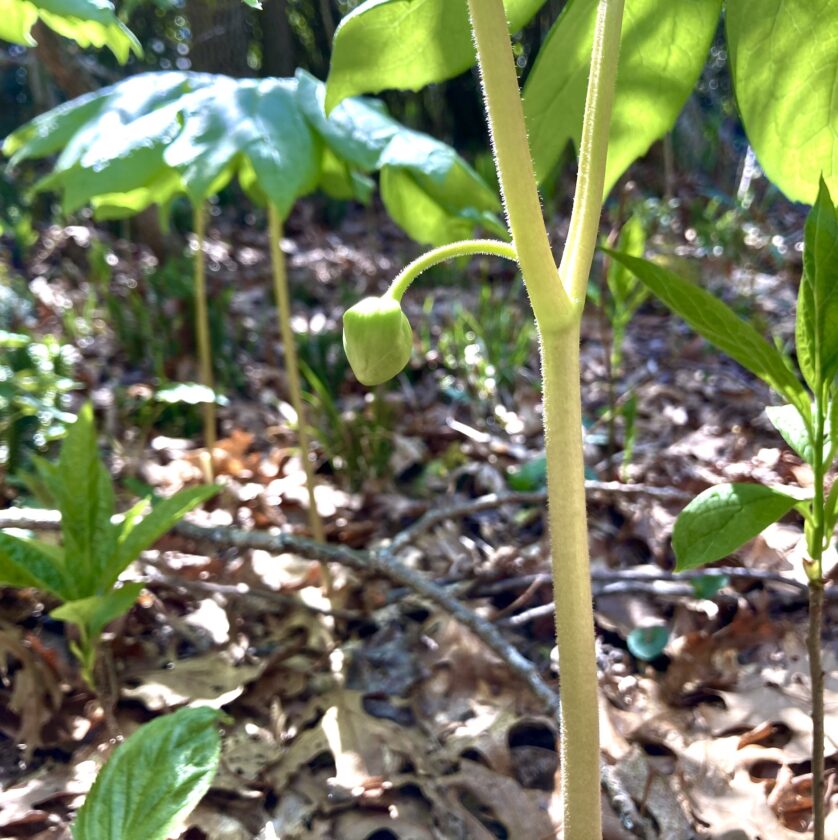 The next picture shows a fruit that is probably (?) ripe. It is yellowish and has some give, but this isn’t the kind of thing I’m willing to explore via trial-and-error. This photo was taken on August 4th. I’m not willing to bet being sick in a survival situation on it, though. This one and quite a few others are growing behind my house. 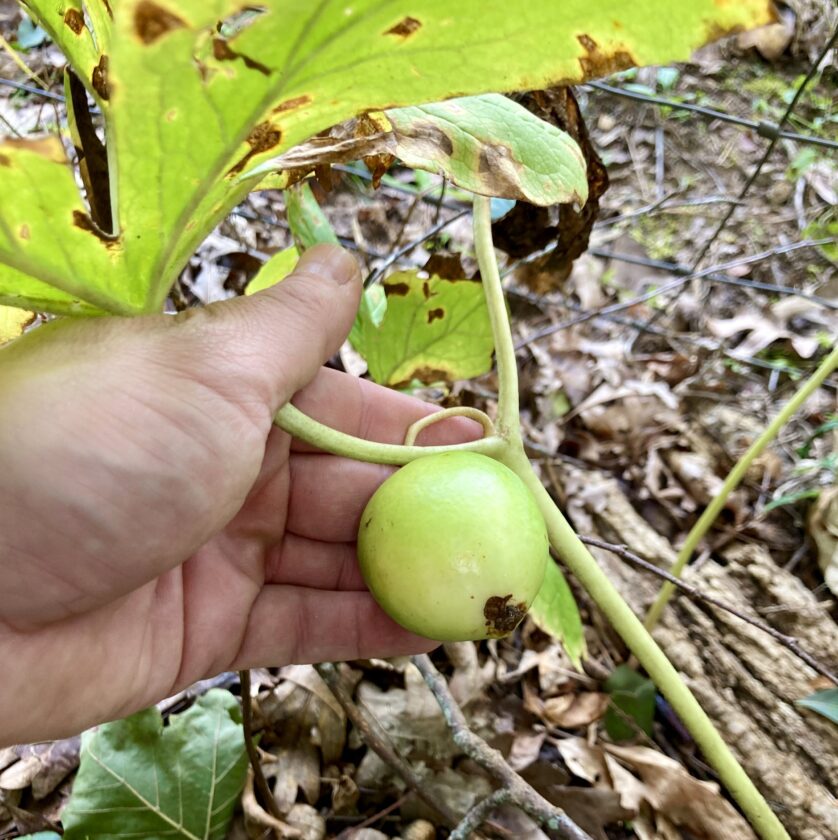 Even though a patch of Mayapples can yield quite a few fruit, you can’t eat very many of them. Even those all in favor of eating mayapples admit that you can only eat them in small amounts. My main interested in foraging wild edibles is for survival. With a good chance of getting sick over a food source that is going to give me very little calories anyway? No thanks. 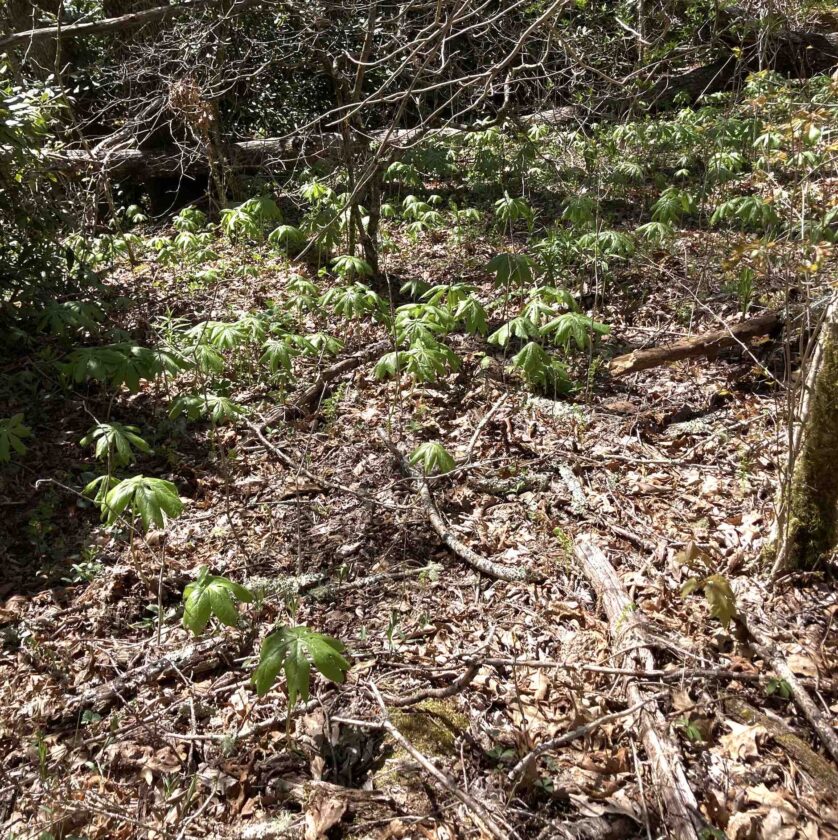 Once you spot the umbrella-like leaves of mayapples you’ll start seeing them everywhere. They form rhizome networks and create patches like this.

Okay, this is an easy one! Leaves of three, let it be! At least that’s what the old grade-school rhyme told us, and it’s not wrong. Poison ivy causes an itchy rash thanks to urushiol, an oil found on the leaves. Pretty much everyone knows that. If you touch poison ivy wash your hands with soap and water to remove the oil as soon as possible. Oil can also be carried and saved for later on your clothing, pack, and even your dog’s fur. 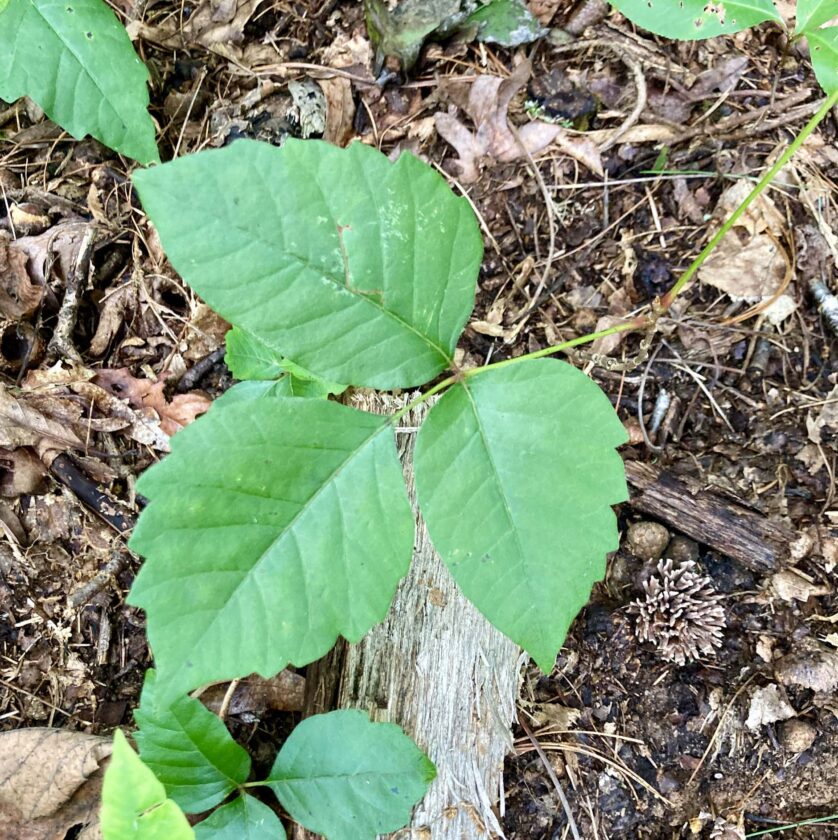 Obviously you shouldn’t eat poison ivy (pro tip: try to avoid eating anything with “poison” in the name). Poison ivy berries can cause death. You also shouldn’t burn poison ivy plants. Burning it aerosolizes the oils. Breathing it can irritate your airway causing it to swell and ultimately causing airway compromise. This isn’t a theoretical thing; a childhood friend’s dad spent a few days in the ICU after standing downwind of burning brush containing poison ivy. 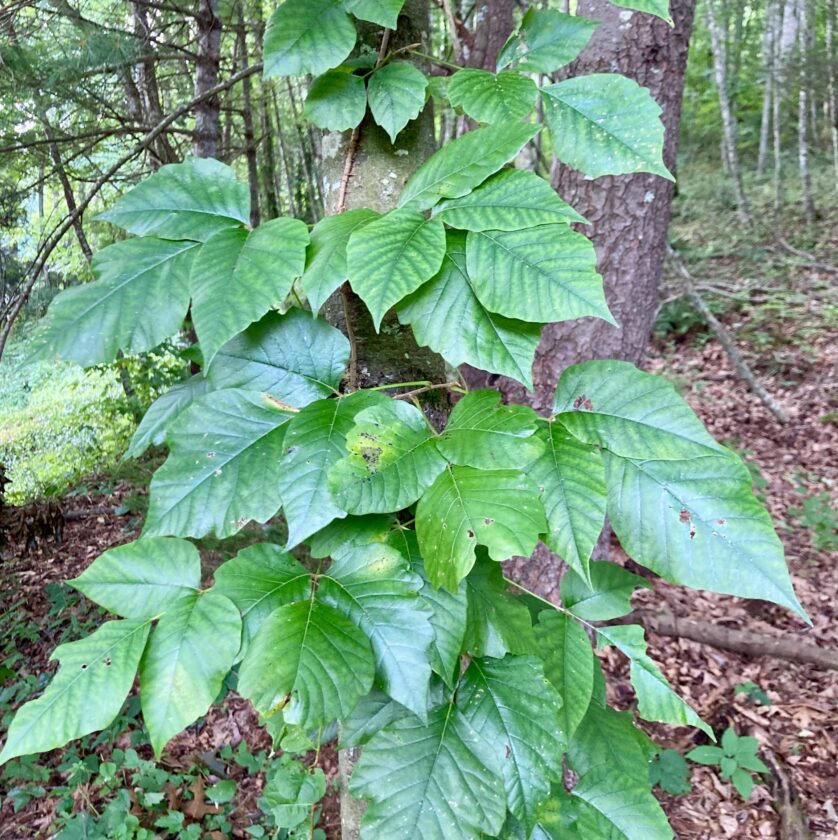 Poison oak and poison sumac are often listen alongside poison ivy, but I don’t see either in my area. That doesn’t mean they aren’t here…maybe it just means I’m not looking hard enough. 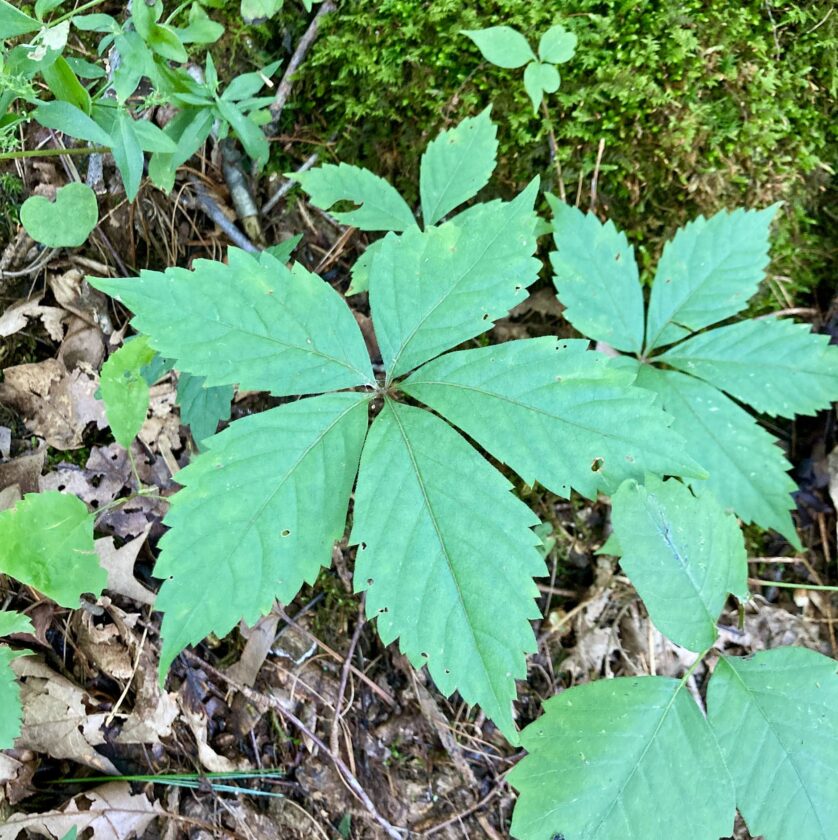 Virginia creeper definitely resembles poison ivy. They both grow in the same environments, and can often be found climbing the exact same tree. Instead of three leaves Virginia creeper can be identified by sets of five leaves. You’re safe brushing against the leaves of Virginia Creeper, though. 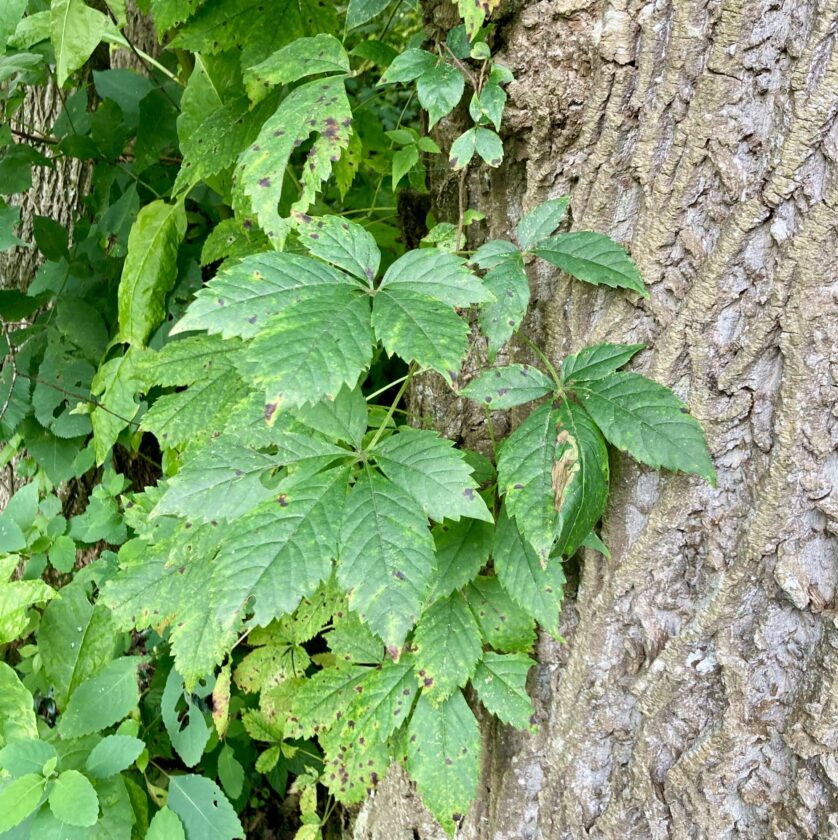 Again, beware the berries. The berries below are unripe and don’t look terribly appealing. The ripe berries are a very pleasing blue, though. 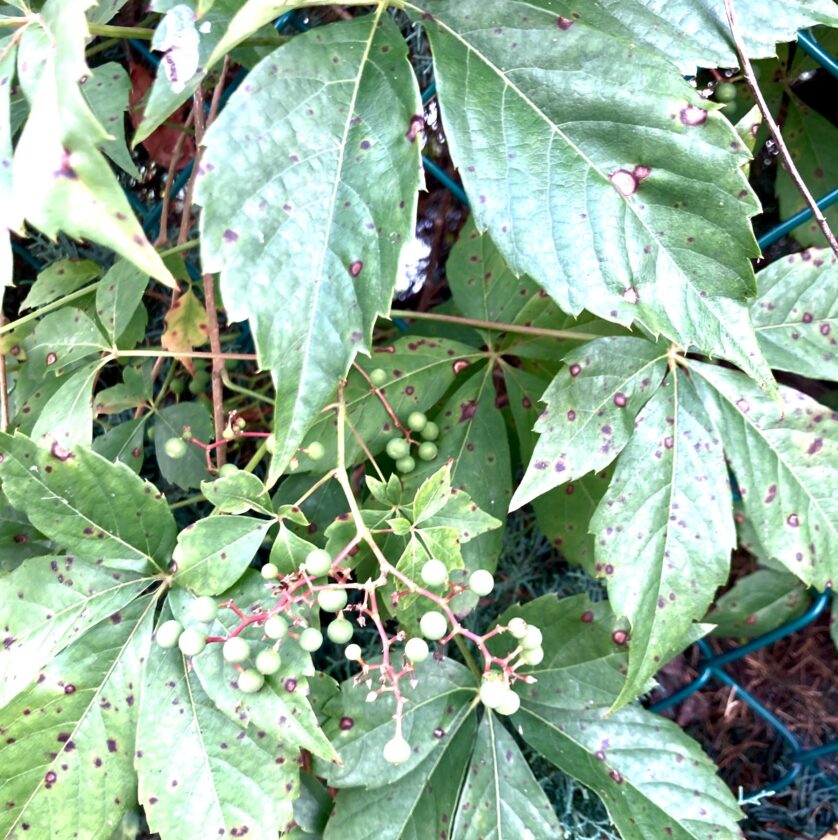 I hate to issue such a broad category, but mushrooms can be extremely toxic. I highly recommend listening to this episode of Outside Podcast for an idea of the danger of eating misidentified mushrooms.  If you don’t know a mushroom, DO NOT EAT IT. 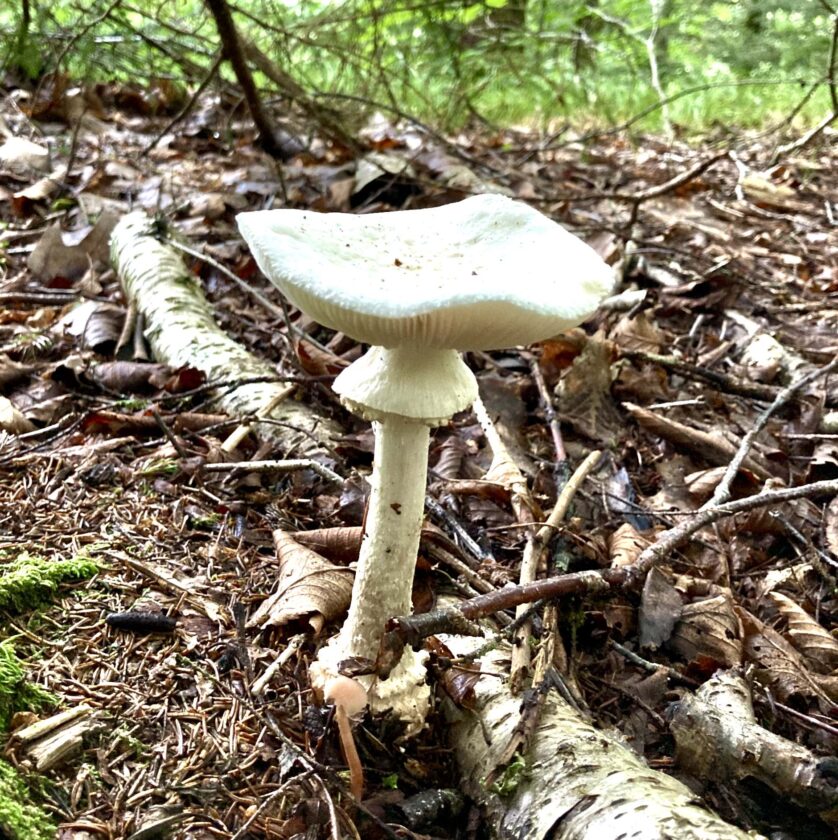 Ultimately identifying poisonous plants probably isn’t a huge priority. Instead of working hard to learn what a bunch of dangerous stuff looks like, just follow this simple rule: don’t eat anything unless it is known to be safe. Still, it’s not a bad idea to know some common poisonous plants, especially if you have kids or pets that might eat them. Like the wild edibles post I expect this one to be a living post, updated regularly as I learn to ID more plants. Stay tuned!