Winter is no longer coming – it has arrived! Last weekend we woke up to over a foot of snow outside. I thought I would share a few of our preparations and lessons-learned from this event. There’s nothing new or ground-breaking, but hopefully some of our lessons can be helpful to your own winter weather preparedness plan. 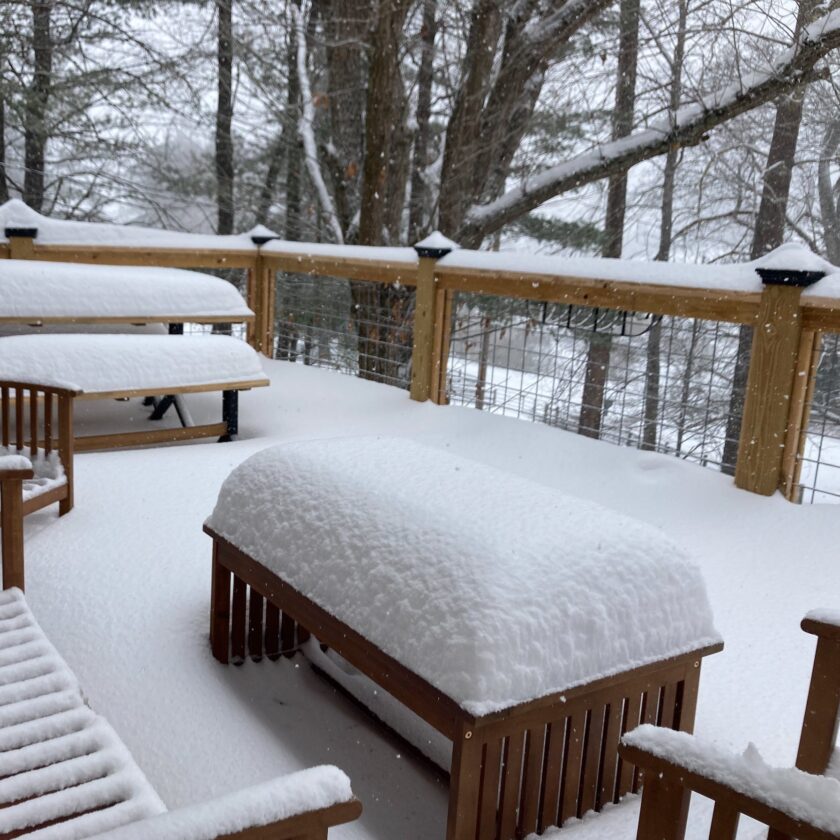 Since we keep a good supply of food, water, emergency equipment, etc., winter weather preparedness should mainly focus on preparing for a power failure. These lessons are a bit scattered and, as I said, nothing ground breaking, but they might we worth sharing.

A quick rundown of the situation: we live outside of town. Our town consists of about 4,000 people, and isn’t exactly a priority area for plows and other resources. We are well outside of that and didn’t see a plow until the third day into the storm. Some friends road over in their Jeep and said, “it looks like a different world out here!” because nothing had been plowed, salted, or otherwise improved.

Needless to say getting out – or getting emergency services in – would have been a painfully slow process. We were pretty much on our own for a couple days. Fortunately I didn’t have to work and could sit back and enjoy it.

We never lost power. As you will see we were constantly aware of it and ready for it. We did have some cold temperatures; for several days the temp stayed below 20 degrees (I know that’s not that cold for some of you).

And that’s about it! Let’s get into the lessons learned.

First, we made an effort to keep phones charged at all times. If we lost power, we didn’t want to start with a half-full phone. This was pretty easy to manage – since we weren’t getting out much it was easy to keep our phones on the chargers. We also made sure to top up rechargeable AAs, battery packs, etc. 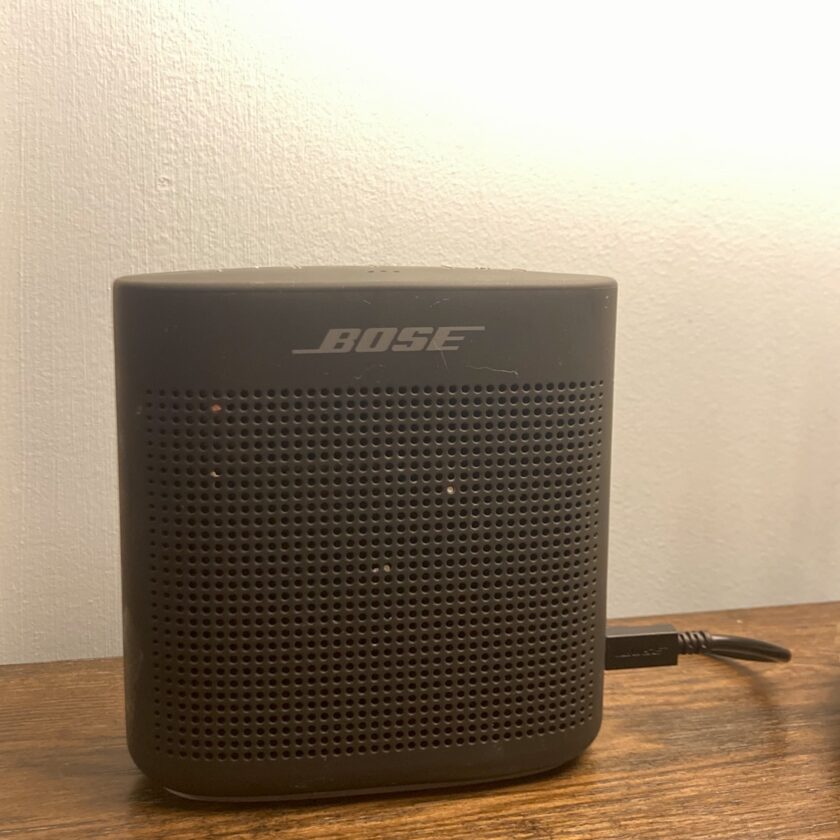 One other thing we kept studiously charged was our little Bose Bluetooth speaker. This was part of our entertainment plan – if power went out we would put on an audiobook. This is a little less hassle than trying to read by headlamp or lantern light. We didn’t even wait for the power to go out to do this; we put a book on and I sharpened knives why my girlfriend crocheted.

Next, we made sure to prep our alternative light sources. For us this is handheld flashlights, headlamps, and battery-operated lanterns. I own a ton of flashlights, as you might imagine. We have flashlights staged around the house, but we also pulled out the lanterns and headlamps and made sure everything was in good working order. When the lights go out is not the time to start looking for a flashlight.

We have used oil lamps in the past. In fact, we used them just enough to teach us that we’d much rather use battery-operated lamps. The penalty for knocking over an lit oil lamp is just too great. We do keep several oil lamps and lanterns, wicks, and plenty of lamp oil, but they are reserved for much longer periods without power. We’ll stick to safer, battery-operated light sources as long as we can.

We adopted several strategies around water. First, we have plenty of drinking water stored, so that wasn’t a huge concern. Bigger concerns were toilets and dish-washing. First, we filled a bathtub. This gave us instant access to 60 to 70-ish gallons of water for these purposes. Should this begin to run low we have a creek…and tons and tons and tons of snow. 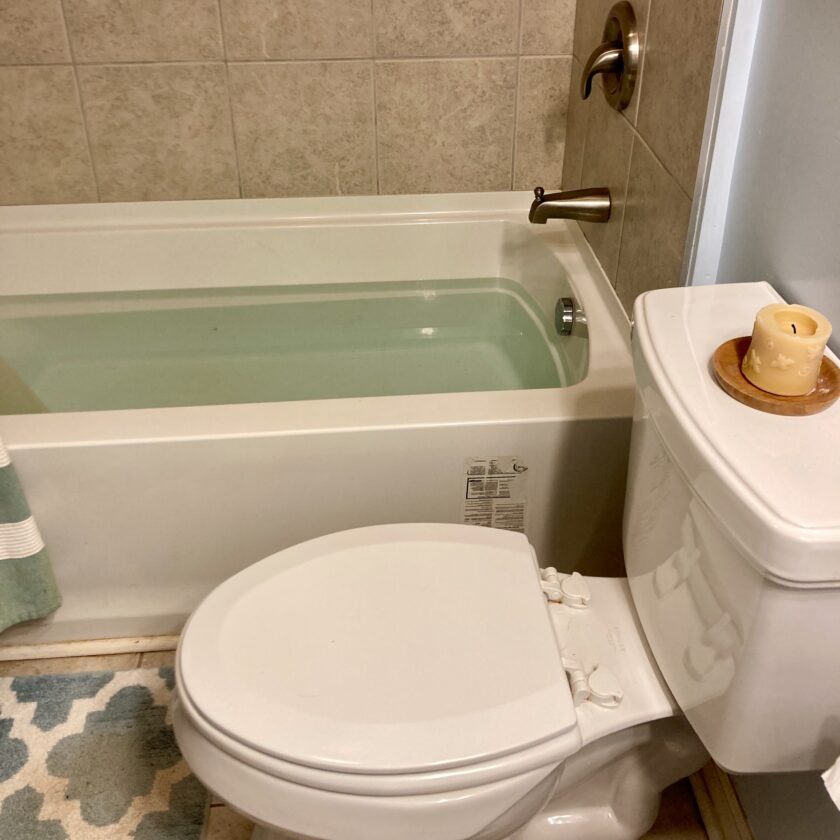 I briefly considered using a WaterBOB but quickly reconsidered. Since this water is for flushing the toilet I don’t really care how clean it stays. If you plan to use this water for drinking you should probably consider using the WaterBOB. If you do fill a bathtub think about kids or pets that could fall in and be unable to get out. You will probably want to put some control measures in place, like keeping the door closed or using a baby gate. 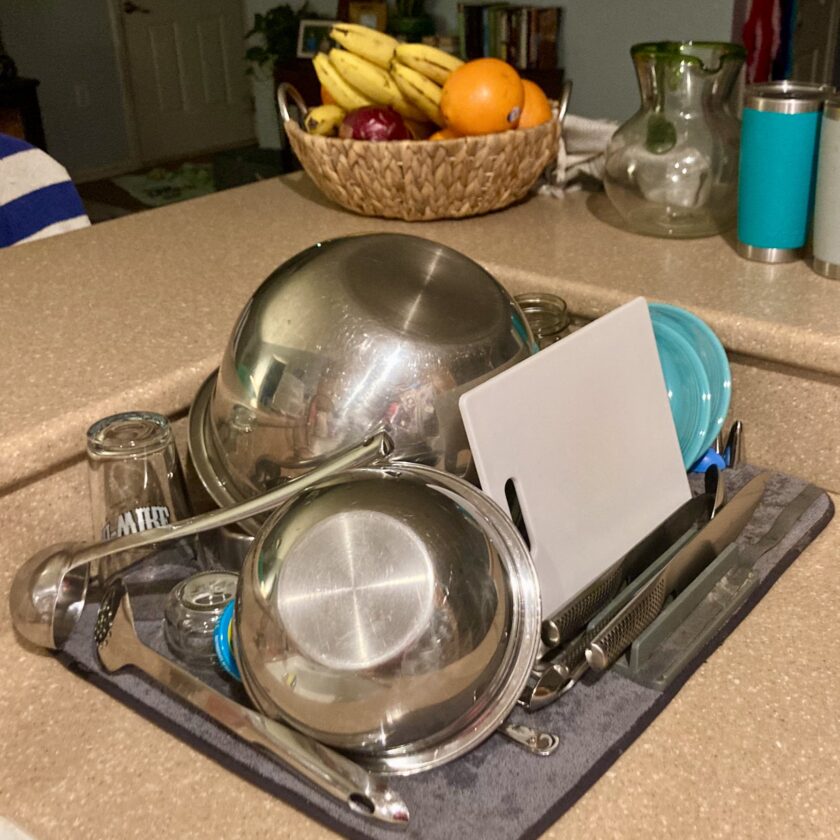 Next, we were really careful to stay on top of stuff that required water. Rather than wait until our Berkey was empty we kept it topped off. Every time our ice bucket got low we emptied a tray and refilled it. We did dishes by hand, as we used them as we used them instead of filling the dishwasher. If the power went out we didn’t want to be caught with a dishwasher almost full of dirty dishes.

You should already have a two-week supply of food, right? I’m not going to beat this section to death because I assume that most of you reading this are prepared for at least a couple weeks of self-sufficiency. Had we been caught completely unawares by this storm we would have been good to go. 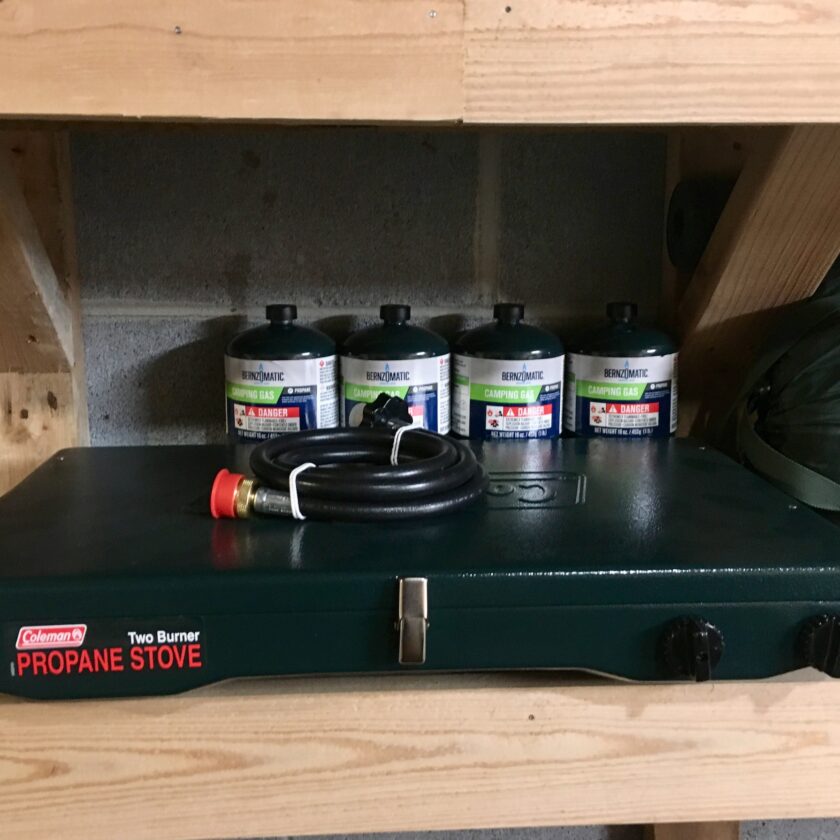 Just in case you aren’t super prepared… Make sure you get some easy stuff that is up to your cooking/refrigeration capability if the power goes out. A bunch of steak doesn’t do much good if you can’t cook and refrigerate it. You should probably look into some sort of survival cooking capability. My recommendation would be a two-burner Coleman stove (review coming soon). Spend $50 on a 20# tank and a couple more bucks on a high-pressure adapter and you’ve got cooking covered for a couple weeks. Obligatory can opener advice: make sure you have a can opener.

Where possible we like to double up heat and cooking. That doesn’t mean trying to heat with a cooking source (DO NOT do that), it means cooking with our regular heat source. Big, one-pot dishes like soups, stews, and chili are easy to cook on the wood stove top and don’t make a huge mess. 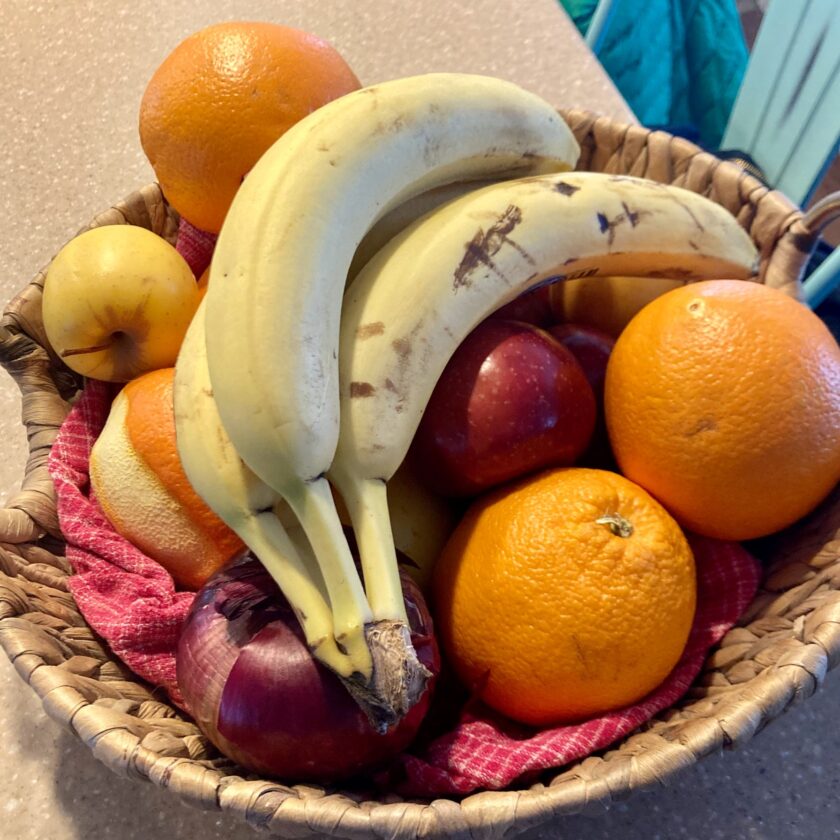 Even if you’re pretty prepared you may want to make a last minute trip to the grocery store for perishables. We tend to only have to go out for stuff we can’t store very long, like fruit and veg. We went out three days before the storm hit to avoid the rush and not be part of the problem.

Mobility shouldn’t be your top priority…but you should make provisions for it. Emergencies don’t take a snow day. I spent a lot of my snow days listening to my co-workers on the radio. A lot of calls involved parking the ambulance from hundreds of feet to several miles away and taking an fire department ATV the rest of the way. That imposes still time penalties for emergency responders. 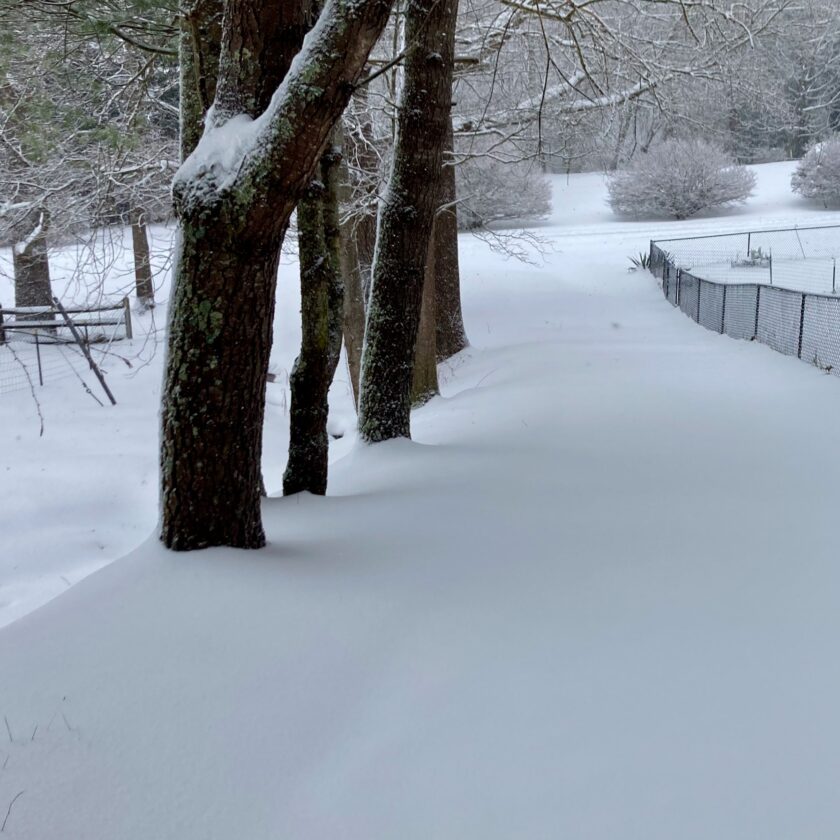 If you live outside of a very populace area you’ll probably need to dig out (and maybe salt) your driveway. Regardless of where you live you’ll need to clean your car off. I would recommend an early, proactive approach. If you have tire chains, get them on. 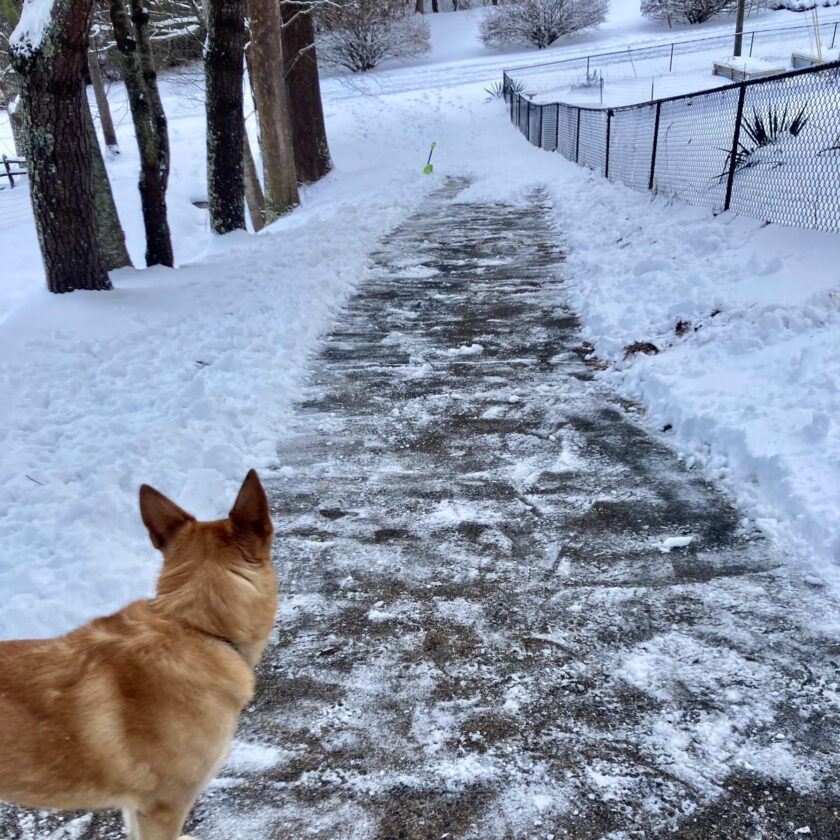 If there is any chance of snow where you live, have a full-size snow shovel on hand! I got caught with nothing more than a 3′ shovel intended to be stored in a vehicle; I thought I had a snow shovel until I started on my driveway. You can bet I won’t be caught unprepared again.

Providing for some form of heat is a huge priority of winter weather preparedness. We heat with wood as our primary heat so the storm was no big deal for us. In fact we’d had the same fire burning for two weeks when it hit, and it’s still burning now. Before the storm I made sure we had plenty of wood on the porch. That’s about it, other than having a little kindling, just in case the fire went out. It didn’t, though; we have kept the same fire burning for over three weeks now.

If you don’t have wood heat (I get it, few people do) you need something. It doesn’t have to keep your house at a balmy 74 degrees round the clock, though. If you can keep the temp up to 60-65 it will be a lot more comfortable than 35-40, and your fuel will go a lot further. For a completely standalone solution I recommend a kerosene heater. Plan for two gallons of fuel per day, and plan to close off sections of your house and just heat a centralized area like the living room.

An alternative that I have a little experience with is the Mr. Buddy propane heater. Again, you may want an adapter to fuel it with a 20# tank.

Be extremely careful when using any auxiliary heat source!!! Make sure you have adequate smoke detectors, CO detectors, and fire extinguishers. Your life literally depends on it. For more information ready my Fire Emergency Preparedness article.

A good snow is an AWESOME time to build some rapport with your neighbors! This particular snow storm was well-forecasted. Mostly everyone was prepared and looking forward to it when it hit. People were in a great mood when the snow was coming down, and the day after. Not only were people in a great mood, they were outside. For the first time since the initial COVID lockdown we saw more people walking up and down the road then we did vehicles. This was a great opportunity to see some folks we haven’t seen much lately.

We also made the effort to walk up to a new neighbor’s house. We stuck a can of beer in each coat pocket, boxed up some homemade cupcakes, and texted them to see if they were OK with company. When they said they were we walked up their driveway. We found them outside, sledding with their kids. We gave everyone a cupcake, and a beer to the adults. It’s safe to say we are probably off on the right foot with them.

As Winston Churchill said, “never let a good crisis go to waste.” If you have a good snow storm that closes things down for a day or two, take advantage of it. I get it – meeting new neighbors can be hard. When something like this comes along it can be much easier. Make “build rapport with neighbors” part of your winter weather preparedness plan, and be ready to act on it!