Some savvy readers may have noticed that I am in the process of uprading some of my weapon-mounted lights. I recently put a Modlite on my AR. After attending Tim Chandler and Ashton Ray’s Shotgun Skills I decided it was time to bite the bullet and invest in THE pump shotgun light: the Surefire DSF-870 Forend.

I paid for this product out-of-pocket. I have no relationship whatsoever with Surefire and received no incentives, financial or otherwise, for writing this review.

Outfitting a pump shotgun is a lot like outfitting a revolver. First, there are a couple mainstream manufacturers and models that you’d better stick with if you want aftermarket support. These are the Remington 870 and the Mossberg 500/590 in shotguns (and Ruger and S&W in revolvers, generally). Shotguns are decently supported, but nowhere near as well as ARs. Second, like revolvers, pump guns are kind of bogged down with the same accessories that were available twenty years ago. Nowhere is this more evident to me than weapon-mounted lights.

If you buy a Remington 870 or Mossberg 500/590 you’ll have a couple options for a WML. One is the Streamlight TL-Racker (Amazon link) that I reviewed a while back. While not perfect, it’s pretty good and it can be improved upon. It’s problems are mainly that it’s too fat and doesn’t give you much up front to push on with a modern, push-pull technique.

The next option is the Surefire family of lights, the most prolific of which is the DSF-870 and DSF-500/590. These lights are the ones recommended by nearly all serious shotgun guys, but they have some issues. They are known for high quality, a virtue they come with in spades. They also come with some problems, though, and these are seldom mentioned. Let’s take a look at the light, then get into my opinions.

Features of the SureFire DSF-870 Light

The Surefire DSF-870 does have some pretty awesome features. First, it is incredibly high quality. Everything about this product feels good, there’s no question about that. The DSF-870 is a forend and a light, so let’s talk about how it functions as a light. The light head screws into the forend and holds two batteries in place. The batteries are side-by-side rather than end-to-end. This is to protects the circuit and to prevent the batteries from deforming under heavy recoil. 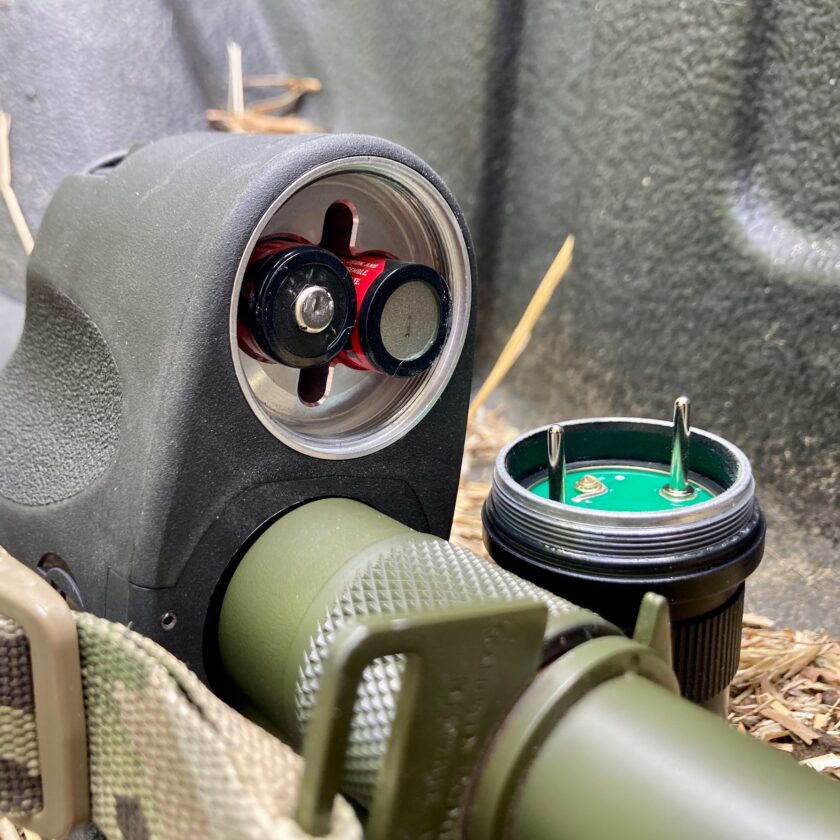 The light is constructed of mil-spec, hard anodized aluminum. It is encased in polymer that makes up most of the rest of the forend. It installs easily on the appropriate shotgun, even if you aren’t sure how to swap out a forend. The light gives of a very good 600 lumens with good throw and excellent spill. Let’s be honest: you probably don’t need a 300-yard throw on a shotgun light.

The light is activated by switches on the side of the fore end. There are two identical switches on each side of the light. The forward switch is a momentary ON. The aft switch is a constant on. These switches can be programmed to be reversed depending on mission requirement or personal preference. 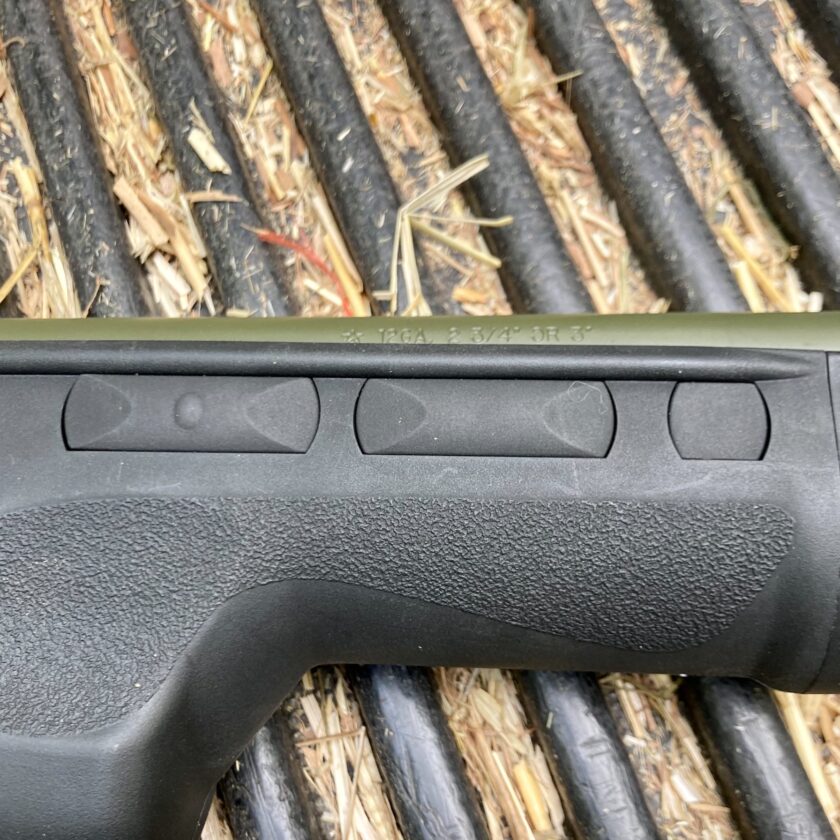 The left side of the forend had a third switch; this one toggles the light to the low, 200-lumen mode. To be honest I could totally live without the second, reduced-power mode. It may be more functional for LE/Mil guys during post-raid searches, but it serves little function for me. 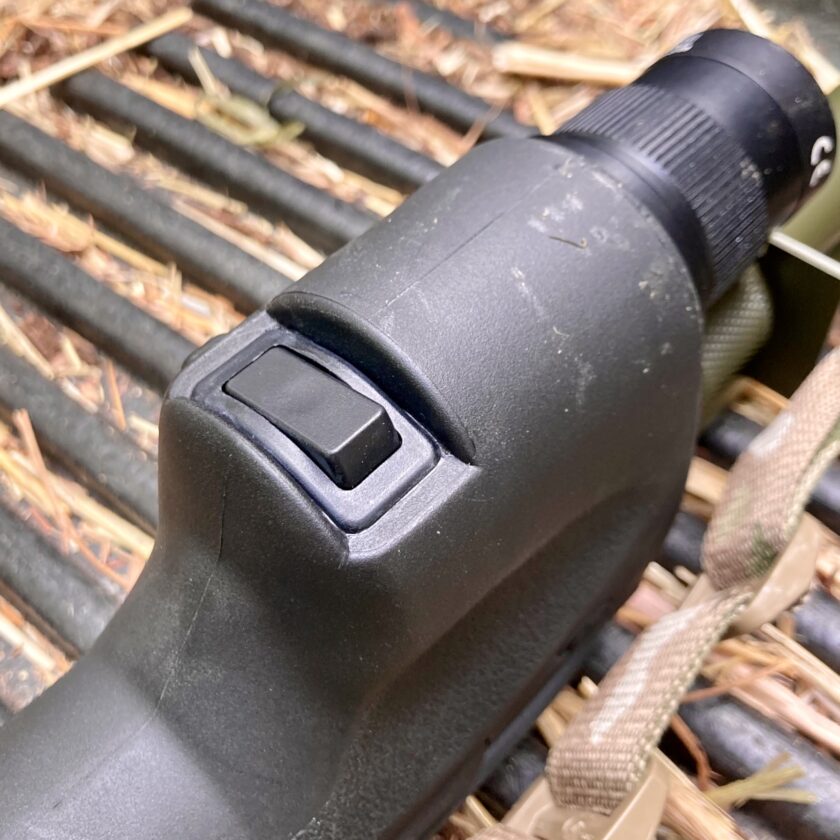 The DSF-870 and DSF-500/590 have a lockout switch. It is a simple rocker switch on the underside of the light. It is easy to locate, easy to operate. The rocker switch is reasonably protected from accidental activation, but it’s not hard to imagine it getting bumped onto the wrong setting. If you’re light don’t light up, checking this switch should be your immediate action.

The Surefire DSF-870 has a tremendous reputation for durability and I don’t dispute this at all; this is truly a professional grade light. I haven’t used and abused to to any great extent to prove this to my own satisfaction, but considering its reputation I don’t really feel I have to.

The light is rated at IPX7 for water-resistance. This means it should be able to take a dunk in up to 1 meter of water for half an hour. This should be plenty for the average home defense shotgun that – in the absolutely worst case scenario – might see a few minutes of heavy rain.

Though I fully expected to write glowing praise, I began this review on a somewhat tepid tone and I stand by it. Boy was I disappointed when I pulled this thing out of the box and installed it on my shotgun, and for several reasons. First, the cost. This WML cost around $350 at Amazon.com prices. That’s a lot of scratch for a shotgun light. If it’s a great light it’s worth it, but I’m not sure it is…

My biggest complaint is the size. I complained quite a bit about the TL-Racker’s girth and the difficulty in applying a solid push-pull technique. If you though the TL-Racker was big, be prepared for this guy. Though Surefire calls it a “slender” grip, it is thick and wide. I had really hoped the premium dollar would get me a somewhat slimmer forend, but it didn’t. Though I haven’t shot this forend as much as I like, my first couple of range sessions with it confirmed my initial disappointment.

I would love to find a similar product that was just a bit slimmer in the hand. Perhaps the width is necessary to house the switches, but it seems excessive. On the other hand I’m sure some practice will get me performing at a higher level with the DSF-870.

My next complaint is the weight. This unit is a considerable 18+ ounces with batteries installed. That’s an extra pound and two ounces on the end of your shotgun. This is a lot of weight to add out front, and it is absolutely noticeable. It impacts how the shotgun points and balances, and definitely makes it harder to hold out there on target for long periods.

This may sound like a bunch of pointless complaining, so let me get to the point. Pump shotguns are still perfectly viable defensive weapons. But they are like revolvers. They aren’t supported like other weapons systems are. You basically have two options for integrated WML/forend solutions.

If you run a semi-auto shotgun, on the other hand, like the Beretta 1301, the world is your oyster. Then you don’t have to buy a “shotgun light,” you just buy a light. Any old Surefire, Modlite, Arisaka, Streamlight, Cloud Defensive, whatever, and you’ve got your light. This is something to seriously consider for those of you just beginning to study the Gospel of the Gauge.

If this sounds like a somewhat mixed review, it is. Though I’ve never read anything but praise for the Surefire DSF-870, it’s not a very impressive light. It is, however, a very high quality light, and it is constructed extremely well, and has some well thought-out features. It could be designed for much better ergonomics, however. Every other weapon light line on the market is pushing for smaller, lighter, brighter. I just don’t think there’s the competition to really get innovative with pump shotgun forend lights. 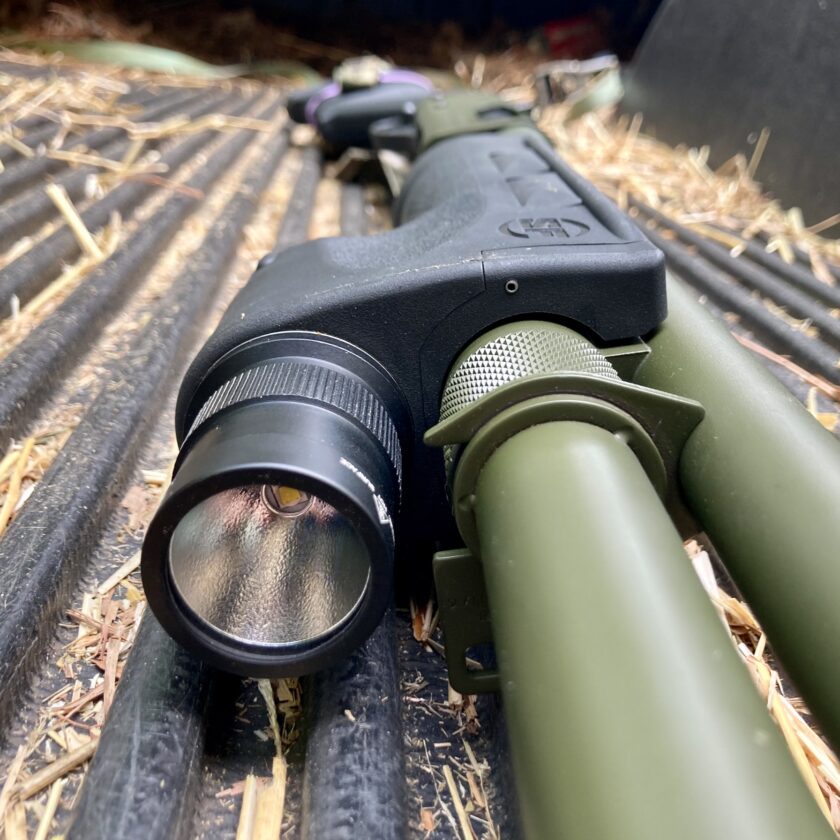 In the meantime I’ll use this Surefire and get good with it. And who knows, maybe after a few more months of regular use I’ll come around to it. If that’s the case I’ll let you guys know. In the meantime is the Surefire DSF-870 worth $350? . Personally I don’t think it’s three times better unless you’re a cop or military guy who needs absolutely bombproof gear (lets be honest – most of us citizens don’t). In most cases I’d recommend you go with the lighter, brighter, and 1/3 cheaper Streamlight TL-Racker.