I recently had the opportunity to explore another city in my search for rare and interesting locks. Lock Safari Salt Lake City took me through quite a few neighborhoods over a long weekend. Over three days a friend and I covered the Marmalade, 9th and 9th, Temple Square/Downtown, and Sugar House areas of SLC. I found quite a few interesting locks, but not as many as I expected from a city of this size.

But I didn’t come up totally empty-handed, and I visited a major landmark: the Mormon Temple. I always enjoy seeing what locks are used on noteworthy buildings, though they rarely fail to disappoint. Without further ado, here’s what I found on Lock Safari Salt Lake City:

While I didn’t see a single Medeco, I did find the standard assortment of ASSA locks. All of these were of the 6000-series Twin/Twin Combi variety, and all were mortise cylinders. Interestingly, the lock in the leftmost image does not have a “UL” stamp on the face of the cylinder plug. If I’d noticed this while I was there I would have taken a closer look. It is possible that this may be a simple, albeit incredibly high-quality, pin-tumbler lock.

I ran across this interesting lock on a storefront door. This lock is simple tubular lock, but it’s purpose is not as the primary lock for the door. This lock is a switch for the alarm system. It appears to have a small indicator bulb built-in. Due to the age of this lock and the condition of it’s host structure, I’m not sure if the bulb is broken or the alarm is deactivated.

I found two other locks, neither of which are high security, but both of which are worth pointing out. The one on the left is a TrioVing cylinder, and I technically found it in Tooele, UT. These six-pin cylinders are incredibly challenging to pick. This is primarily due to their unique double-spool top pins. The other lock is a Schlage Everest. Though not a true high security lock it is something of an upgrade over standard Schlage cylinders. The fact that this model is an Everest is indicated by the “peak” logo to the right of the keyway.

Lock Safari Salt Lake City yielded an in-the-wild first(!): the Corbin-Russwin Pyramid. The Pyramid is a UL-listed high security lock†. It is a standard pin-tumber mechanism (one of only a few that meets UL-standards). The Pyramid achieves its security with 7 pins (rather than 5 or 6) and its incredibly tight tolerances. The Pyramid also features a pyramid-shaped moveable element on the key (I’ll do my best to post a photo of a Pyramid key soon). This element activates a “check” pin in the bottom of the keyway. More importantly it makes key duplication almost impossible. Check out that wicked keyway! 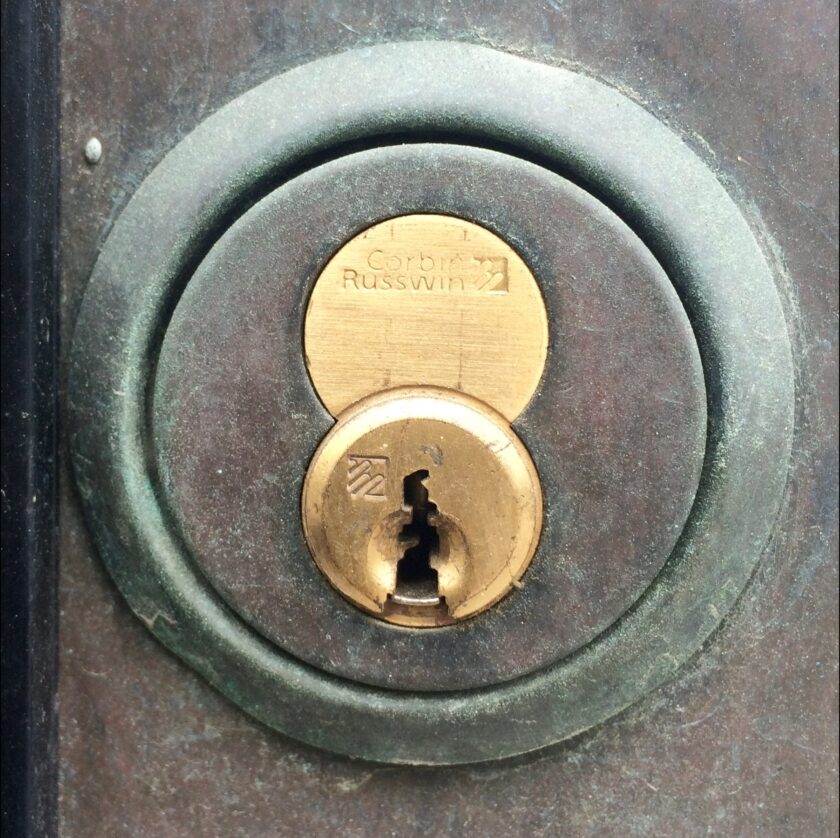 Also incredibly interesting to me were the locks of the Mormon Temple. The locks on the gates of Temple Square were Schalge Primus LFIC. Interestingly, the locks on the Temple itself were not high security. I admit a bit of disappointment at finding such ornate hardware (and door) accompanied by a pedestrian rim cylinder. The keyway appears to be a Kwikset KW1, but I’m not sure. One imagines the security of the Temple is primary given to human security; still, it would’ve been nice to see something commensurate with the level of detail seen elsewhere on the grounds.

†Interchangeable core (IC) versions of both of these locks are not UL-437 listed. This is because the cores cannot resist the pulling requirement of the UL test. The lug that holds the core in the lock body cannot be made robust enough to withstand the pulling pressure due to space limitations. Both the Pyramid and Primus locks I encountered on Lock Safari Salt Lake City are unlisted because they are Large Format Interchangeable Core (LFIC) versions.